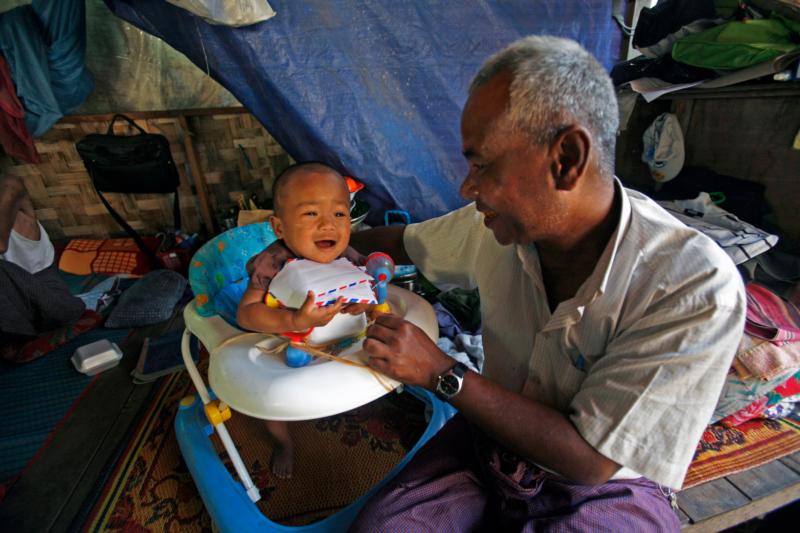 An HIV-infected child smiles at a visitor in 2011 at a hospice care center in Yangon, Myanmar. Caritas Internationalis brought together representatives of faith-based groups from all over world April 11-13 in Rome to hammer out a "road map" indicating the best ways to promote or provide early diagnosis and treatment for HIV, especially in children. (CNS photo/EPA)

VATICAN CITY (CNS) — The fight against HIV/AIDS is being hampered by continued stigma against those who are infected, a lack of access to appropriate medical care and fake antiretroviral drugs pedaled on the black market, said activists taking part in a Caritas Internationalis conference.

Caritas brought together representatives of faith-based groups from all over the world to hammer out a “road map” indicating the best ways to promote or provide early diagnosis and treatment for HIV, especially in children. The gathering was organized together with UNAIDS, the U.S. President’s Plan for AIDS Relief (PEPFAR) and the Vatican’s pediatric hospital, Bambino Gesu.

About 80 people active in HIV/AIDS policy and relief work took part in the conference April 11-13 in Rome.

The importance of offering effective antiretroviral treatment can be seen in the work of Loretto Sister Mary Owens, executive director of Nyumbani, which provides care and support in Kenya for HIV/AIDS survivors, especially children.

She told Catholic News Service that when she and the organization’s founder, U.S. Jesuit Father Angelo D’Agostino — a medical doctor — started in the 1990s taking in children who were abandoned because they had HIV/AIDS, “we had no access to antiretroviral treatment” and the mortality rates of children in their care were high.

Since getting help from PEPFAR in 2005, everyone in their care has access to proper treatment and their eldest HIV-positive resident is turning 35 this year, she said with a smile.

“It’s a huge joy to see our kids grow up. One boy is now married and has a son who is HIV-negative.”

Sister Owens, who moved from Ireland to Kenya in 1969, said her biggest priorities now are lobbying for help in testing people for drug resistance so the appropriate treatments can be prescribed immediately and getting access to more advanced medications.

Despite awareness campaigns and action over the decades, stigma is still a huge problem in Kenya, she said.

Having HIV “is purely a medical condition,” she said, and she wants people to know “how unjust it is to stigmatize people, especially children, who are so vulnerable,” and who merely “inherited the virus” during gestation or breastfeeding from an infected mother who didn’t get any or appropriate treatment.

Pope Francis would be the perfect advocate in persuading people to not be afraid of people with HIV/AIDS, she said, pointing to how his appeals and gestures on behalf of migrants have alerted and mobilized people globally.

It would be nice to have the pope “just make a statement, embrace a child with HIV,” she said, to help draw the needed attention to their plight and remind people of their responsibility to help. These “people have a right to treatment and care.”

A lack of resources means some government agencies are “weak,” including the one in charge of regulating pharmaceuticals to guarantee quality and safety, said Dr. Win Tun Kyi, national director of Caritas Myanmar.

With low drug supplies, doctors and clinics have to rely on the cross-border purchases and the black market for many pharmaceuticals including basics like penicillin and vaccinations, he said.

Kyi said these medications are “usually low quality and there are lots of fake drugs out there. I am a medical doctor and I don’t know if a drug is good” and where it really came from since there are no guaranteed controls.

Effective antiretroviral treatment has been key to preventing the spread of HIV and extending the lifespan and quality of life of those infected. But the stigma of having HIV is still strong in Myanmar, Kyi said, so people who are infected often “don’t disclose their situation and get (the drugs) from the border markets” on their own without adequate medical supervision.

Augustine Tuai Sian Piang, program manager of health and HIV/AIDS for Caritas Myanmar, told CNS that when he started working on the program in 2005, church leaders were just as reluctant as the larger society to face and understand the problem of HIV/AIDS. Now, local bishops are more aware and help promote a church that openly embraces, cares for and supports people with HIV/AIDS.

The church’s medical, social, spiritual and psychological support services for patients are so respected and effective, Kyi said, that “the government will refer people to us.”

The church plays a critical role in raising awareness and spurring action, he said, because the traditional local culture means most people “are very shy, we don’t speak up easily, it takes lots of energy to defreeze” rigid appearances hiding real problems.

Because of the cultural obstacles and social taboos associated with HIV/AIDS, a purely medical response is not enough, he said. “Lots of social interventions are needed,” he said, as well as knowing how to navigate the “moral landscape” in order to address the problem in a holistic manner.

NEXT: Pakistan Catholic officials back plea not to demonize all Muslims