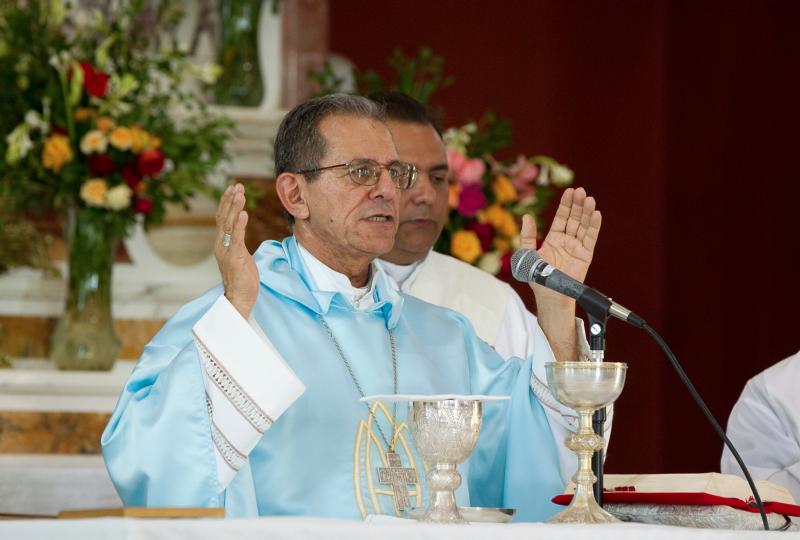 Cuban Archbishop Juan Garcia Rodriguez of Camaguey celebrates Mass in 2012 at the Shrine of Our Lady of Charity of El Cobre in Cuba. (CNS photo/Nancy Wiechec)

VATICAN CITY (CNS) — Pope Francis named Archbishop Juan Garcia Rodriguez, who has worked quietly to help rebuild the Cuban church, physically and spiritually, to be the new archbishop of Havana.

He succeeds 79-year-old Cardinal Jaime Ortega Alamino of Havana, whose retirement was accepted by the pope the same day. The Vatican made the announcements April 26.

The 67-year-old native of Camaguey has been described as a bishop in the style of Pope Francis. Known for his missionary spirit and as a man of prayer, he has the ability to remain calm in the midst of any storm.

He was among the Cuban church officials who worked helping the hundreds of thousands of Cubans who lost their homes and belongings during one of the worst natural disasters in the country’s recent history — Hurricane Ike in 2008.

At the time, Archbishop Garcia was president of the Cuban bishops’ conference, but he was on the scene loading up sacks of beans, rice and “guayaba” paste, a popular type of fruit jam, to take to the people of the province of Pinar del Rio, which had been hard hit by the hurricane.

He found ways to help catechize Cuba after nearly 50 years when religious practice was discouraged by the communist government. Funding from U.S. Catholics helped support projects throughout Cuba, including work by Archbishop Garcia, who enlisted grandparents — who grew up at a time when they were taught about the church — to help educate their grandchildren about the faith.

He told U.S. visitors in 2009 that grandparents teaching the youngest generation had been an effective system of catechesis “because they remember. Then the children help teach their parents,” whose generation missed out on religious education during the government’s most restrictive period.

In 2008, Archbishop Garcia asked Pope Benedict XVI to visit Cuba in 2012, which he did, to help celebrate the 400th anniversary of Cuban devotion to Our Lady of Charity.

“Despite many years of silence about God, in Cuba there is a growing religious thirst and an ever-increasing devotion, especially to Our Lady of Charity, the patron of the country,” Archbishop Garcia said in an interview with the Vatican newspaper in 2008.

A new wave of evangelization has begun among Cuba’s children, and groups of teens and young adults are “living the commandments and the beatitudes despite being mocked and marginalized,” he told the paper.

Archbishop Garcia said the Cuban bishops wanted Pope Benedict to witness “our healthy pride in the people who have remained faithful to Christ and his church throughout the long years in which they were criticized” for believing.

“The Cuban church is a small and fragile flock. But at the same time, it is faithful, open, serving, joyful and happy to live its faith and proclaim it,” the archbishop said.

“In our churches, you find Catholics and potential Catholics, people who follow popular religions and syncretistic believers, as well as diverse political opinions,” he said. “The church welcomes them as a mother and guides them on the path toward Jesus Christ, prince of peace and teacher of truth.”

Archbishop Garcia said the Catholic Church in Cuba suffers from a serious lack of priests; at the time he spoke, the nation had about 11 million residents, but only about 340 priests.

“It is clear that the harvest is plenty, but the laborers are few,” he said. “Yet the thirst for God continues to grow.”

During the bishops’ “ad limina” visit to Rome in 2008, he told Pope Benedict, “At this moment in Cuba there is talk of changes, which the people and the church greet with hope.”

“We ask the Virgin of Charity that these changes would make Cuba a more fraternal and peaceful land, guided by the principles of the common good, subsidiarity, participation and solidarity and by the fundamental values of truth, charity, justice and freedom,” he said.

Born in Camaguey in 1948, he was ordained in his home archdiocese in 1972 and served in a number of parishes there. He was also the founder and director of a school for missionaries in the archdiocese.

He was appointed auxiliary bishop of Camaguey in 1997 and was elevated to archbishop in 2002. He served as president of the Cuban bishops’ conference and represented Cuba in the meeting of Latin American and Caribbean bishops in Aparecida, Brazil, in 2007.

Cardinal Ortega served as archbishop of Havana since 1981, a period that saw openings under the communist government. He hosted Pope Benedict, St. John Paul II and Pope Francis on visits to Cuba. Under his leadership, the church worked quietly to provide social services to Cubans affected by the more-than-50-year U.S. economic embargo of Cuba, and the cardinal worked to help thaw chilly relations between the two countries.

NEXT: Philippine church officials outraged, sad over beheading of Canadian