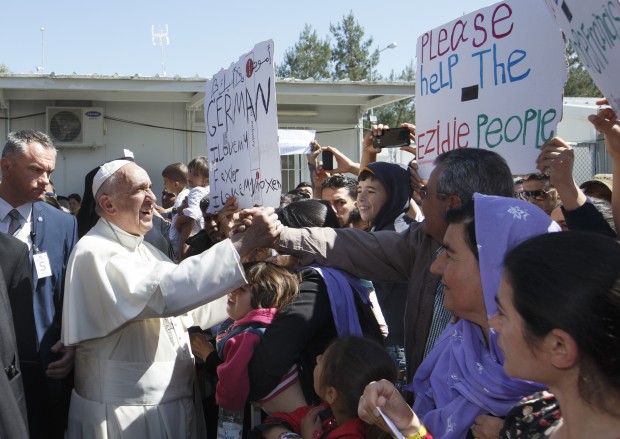 MYTILENE, Greece (CNS) — Although their speeches were punctuated with policy appeals, Pope Francis and Orthodox leaders focused their visit to the island of Lesbos on the faces, stories and drawings of refugees.

Pope Francis, Orthodox Ecumenical Patriarch Bartholomew of Constantinople and Archbishop Ieronymos II of Athens and all Greece spent more time April 16 greeting the refugees individually than they did giving speeches.

The children received a pat on the head and the men a handshake. In respect for the Muslim faith of most of the women, the leaders put their hands over their hearts and bowed in greeting them. The gratitude of those men, women and children was clear in their smiles, tears and sobbing pleas for help.

An Iraqi woman asked for the assistance of the pope and patriarch in finding medical care for her daughter with bone cancer. Another woman kept saying, in English, “We are very tired here.” A man told the pope that he had a brother and sister in Canada and was trying to join them. Another man pleaded with Pope Francis, “Please, father, bless me. Father, please, bless me.”

Pope Francis went to Lesbos expecting those stories. On the flight from Rome, he told reporters, “This is a trip marked by sadness and that’s important. It’s a sad trip. We are going to meet so many people who suffer, who don’t know where to go, who were forced to flee, and we are also going to a cemetery — the sea, where so many have drowned.”

“We are going to encounter the greatest human catastrophe since World War II,” he said.

The pope asked reporters to make a special effort to share with their readers and listeners “what is in my heart.”

After briefly greeting each other at Lesbos’ Mytilene airport, the pope and Orthodox leaders rode together in a minibus to the Moria refugee camp, a facility that a year ago was an open center when migrants and refugees could file requests for asylum. 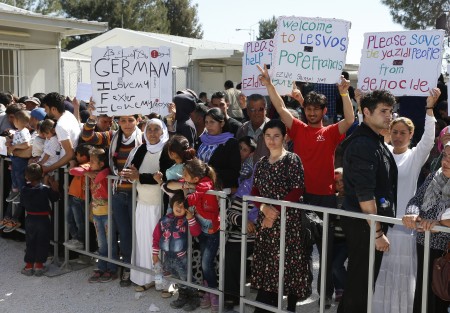 Refugees attend a meeting with Pope Francis at the Moria refugee camp on the island of Lesbos, Greece, April 16, 2016. (CNS photo/Paul Haring)

Today it is a locked facility surrounded by walls topped with razor wire where some 2,500 newcomers wait out the slow process of discovering whether their asylum requests will be accepted or they will be put on a ferry and taken back to Turkey. Most of the refugees are from Syria, Iraq and Afghanistan and set sail for Greece in inflatable boats from the nearby Turkish coast.

Archbishop Ieronymos, speaking at the refugee camp, said he hoped to never again “see children washing up on the shores of the Aegean.”

The Orthodox archbishop spoke with pride of the Greek people who have opened their hearts and even their homes to the refugees, despite years of serious economic trouble and a government almost crippled by austerity measures.

But Archbishop Ieronymos was not so appreciative of the European Union and the international community, which continue to pledge help in dealing with the massive influx of refugees, but also have closed more and more of their borders.

“Only those who see the eyes of those small children that we met at the refugee camps will be able to immediately recognize in its entirety the ‘bankruptcy’ of humanity and solidarity that Europe has shown these last few years,” he said.

For Patriarch Bartholomew, the visit to the camp was summarized as solidarity in tears. 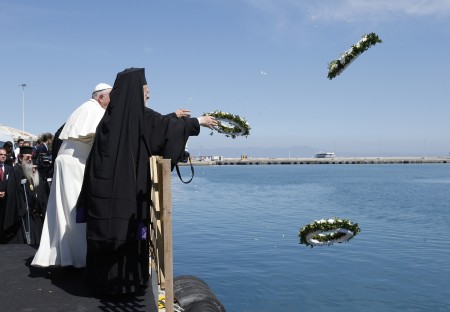 Pope Francis, Patriarch Bartholomew and Archbishop Ieronymos (not visible) throw wreaths into the sea during a service in memory of migrants who have died trying to reach Europe, on the island of Lesbos, Greece, April 16, 2016. (CNS photo/Paul Haring)

“The world will be judged by the way it has treated you,” said the patriarch, the spiritual leader of the world’s Orthodox Christians.

Pope Francis told those interned at the camp that he wanted to join the patriarch and archbishop on Lesbos first of all “simply to be with you and to hear your stories.”

However, he also said they wanted to call the world’s attention to the refugee crisis in the hopes “that the world will heed these scenes of tragic and indeed desperate need, and respond in a way worthy of our common humanity.”

God created all people to be brothers and sisters, the pope said. But it is so easy for many people “to ignore other people’s suffering and even to exploit their vulnerability.”

The pope urged the refugees, “Do not lose hope!”

“The greatest gift we can offer one another is love,” Pope Francis told the refugees. He asked them, even in the camp, to express that love with “a merciful look, a readiness to listen and understand, a word of encouragement, a prayer.”

He told the refugees, most of whom are Muslim, “We Christians love to tell the story of the good Samaritan, a foreigner who saw a man in need and immediately stopped to help. For us, it is a story about God’s mercy, which is meant for everyone, for God is the all-merciful,” he said, using a familiar Muslim description of God.

Pope Francis, Patriarch Bartholomew and Archbishop Ieronymos signed a joint declaration at the refugee camp insisting the world “cannot ignore the colossal humanitarian crisis created by the spread of violence and armed conflict, the persecution and displacement of religious and ethnic minorities and the uprooting of families from their homes.”

The three leaders insisted that dignified care must be given to those who felt forced to flee their homelands, but they also pleaded with world leaders to get serious about addressing the wars, human rights violations and extreme poverty that cause millions to leave their homelands each year.

The churches’ concern for refugees, they said in the declaration, is not a political position but part of fulfilling the Christian mission of service to the world.

“We urge the international community to make the protection of human lives a priority and, at every level, to support inclusive policies which extend to all religious communities,” they said. 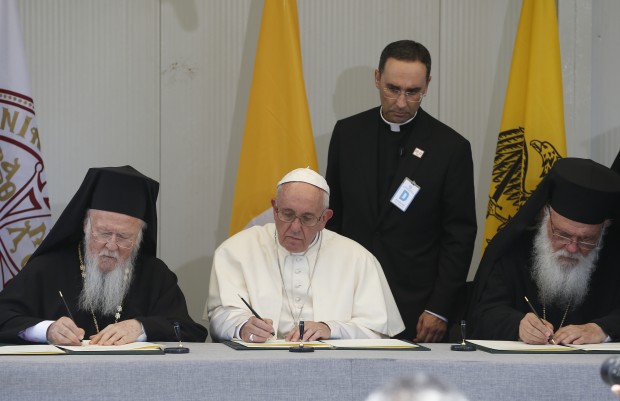 Ecumenical Patriarch Bartholomew of Constantinople, Pope Francis and Orthodox Archbishop Ieronymos II of Athens and all of Greece sign a joint declaration during a meeting with refugees at the Moria refugee camp on the island of Lesbos, Greece, April 16, 2016. (CNS photo/Paul Haring)