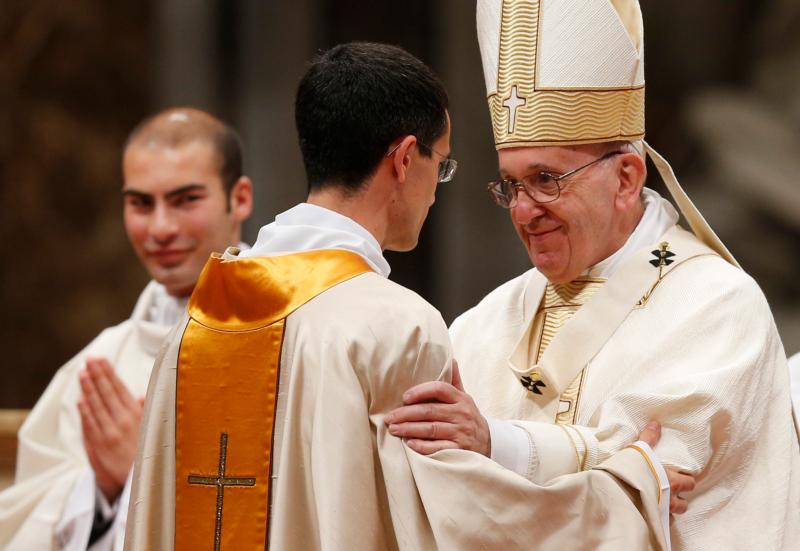 Pope Francis greets a new priest during the ordination Mass of 11 priests in St. Peter's Basilica at the Vatican April 17. Nine were ordained for the Diocese of Rome and two for the Rogationist religious order. (CNS photo/Paul Haring)

VATICAN CITY (CNS) — What you say and how you live always go hand in hand, building up the church and the people of God, Pope Francis told new priests.

“Therefore, may your doctrine be nourishment to the people of God, joy and supporting those faithful to Christ (be) the fragrance of your life, because the word and example go together,” he said.

“Word and example edify the house of God, which is the church,” he said in his homily April 17, the World Day of Prayer for Vocations.

Celebrating Mass in St. Peter’s Basilica, Pope Francis ordained 11 new priests; nine were ordained for the Diocese of Rome and two of the new priests — including one born in Baghdad — belong to the Rogationist religious order.

In his homily, the pope urged the men to read, reflect on and teach the word of God and to be a living example of what they preach.

He asked that they imitate Jesus in their lives, including “carrying Christ’s death” inside of them and walking with him in new life. “Without the cross you will never find the true Jesus. And a cross without Christ has no meaning.” 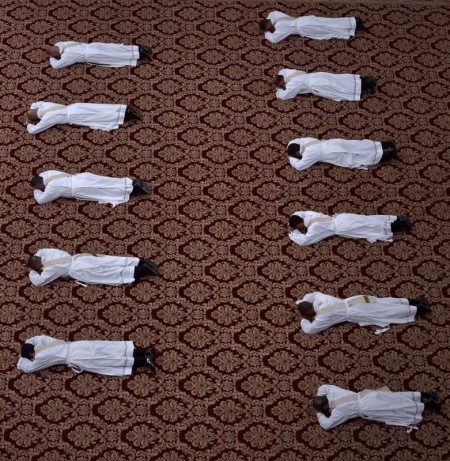 He reminded the men that they were called by Jesus to continue his mission as teacher, priest and shepherd, and to serve the church and the people of God.

“Always have in front of your eyes the example of the Good Shepherd, who didn’t come to be served, but to serve and to look for and save those who were lost,” he said. 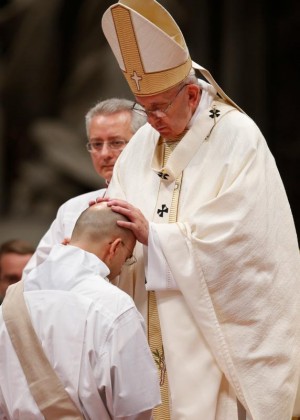 Pope Francis ordains one of 11 priests during a Mass in St. Peter’s Basilica at the Vatican April 17. Nine were ordained for the Diocese of Rome and two for the Rogationist religious order. (CNS photo/Paul Haring)

Later in the day, the pope told those gathered in St. Peter’s Square for the “Regina Coeli” prayer that the image of a shepherd with his flock “shows the close relationship that Jesus wants to establish with each one of us.”

“He is our guide, our teacher, our friend, our role model, but above all, he is our Savior,” the pope said.

Christ has saved humanity and “nothing and nobody will be able to wrench us from Jesus’ hands because nothing and no one can overpower his love,” he said. “Jesus’ love is invincible.”

While the devil and his minions try all sorts of ways to tear this promise of eternal life away from people, “the evil one cannot do anything unless we open the doors of our soul to him, and follow his deceptive enticements,” he said.

NEXT: Kenyan nun killed in Yemen remembered during memorial Mass