Show mercy to all families, the strong and the struggling, pope urges 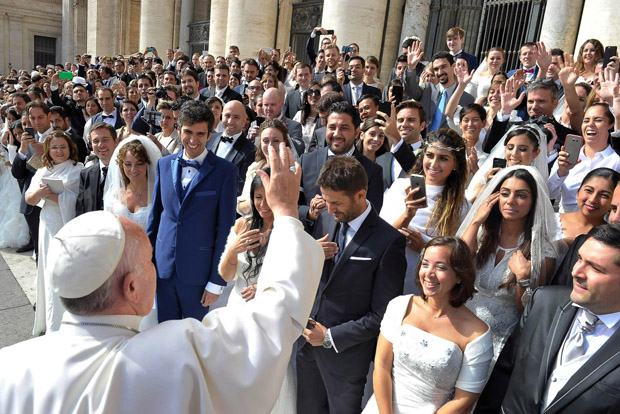 Pope Francis greets newly married couples during his general audience in St. Peter's Square at the Vatican in this Sept. 30, 2015, file photo. Pope Francis' postsynodal apostolic exhortation on the family, "Amoris Laetitia" ("The Joy of Love"), was released April 8. The exhortation is the concluding document of the 2014 and 2015 synods of bishops on the family. (CNS photo/L'Osservatore Romano) 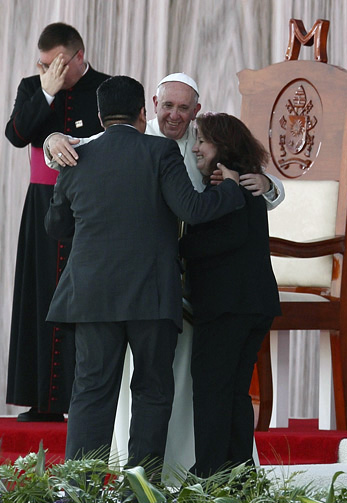 Pope Francis embraces Humberto and Claudia Gomez, who are married civilly but not in the church, during a meeting with families at the Victor Manuel Reyna Stadium in Tuxtla Gutierrez, Mexico, Feb. 15. Pope Francis’ postsynodal apostolic exhortation on the family, “Amoris Laetitia” (“The Joy of Love”), was released April 8. (CNS photo/Paul Haring)

VATICAN CITY (CNS) — The same mercy and patience that are essential for building a strong family must be shown to those whose families are in trouble or have broken up, Pope Francis said in his highly anticipated postsynodal apostolic exhortation.

The document, “‘Amoris Laetitia’ (The Joy of Love), on Love in the Family,” released April 8, contains no new rules or norms. However, it encourages careful review of everything related to family ministry and, particularly, much greater attention to the language and attitude used when explaining church teaching and ministering to those who do not fully live that teaching.

“No family drops down from heaven perfectly formed; families need constantly to grow and mature in the ability to love,” Pope Francis wrote. People grow in holiness, and the church must be there to give them a helping hand rather than turn them away because they have not attained some degree of perfection.

The exhortation was Pope Francis’ reflection on the discussion, debate and suggestions raised during the 2014 and 2015 meetings of the Synod of Bishops on the family. Like synod members did, the pope insisted that God’s plan for the family is that it be built on the lifelong union of one man and one woman open to having children.

Synod members, including priests, religious and laypeople serving as experts and observers, talked about everything from varied cultural forms of courtship to marriage preparation and from the impact of migration on families to care for elderly parents.

Pope Francis’ document touches on all the issues raised at the synods and gives practical advice on raising children, urges a revision of sex-education programs and decries the many ways the “disposable culture” has infiltrated family life and sexuality to the point that many people feel free to use and then walk away from others.

“Everyone uses and throws away, takes and breaks, exploits and squeezes to the last drop. Then, goodbye,” he wrote.

Much of the document is tied to the theme of God’s mercy, including Pope Francis’ discussion of welcoming the vulnerable.

“Dedication and concern shown to migrants and to persons with special needs alike is a sign of the Spirit,” he wrote. Both are “a test of our commitment to show mercy in welcoming others and to help the vulnerable to be fully a part of our communities.”

The synod issues that garnered the most headlines revolved around the question of Communion for the divorced and civilly remarried, as well as Catholic attitudes toward homosexuality.

“In no way must the church desist from proposing the full ideal of marriage, God’s plan in all its grandeur,” Pope Francis said.

He repeated his and the synod’s insistence that the church cannot consider same-sex unions to be a marriage, but also insisted, “every person, regardless of sexual orientation, ought to be respected in his or her dignity.”

On the question of families experiencing difficulties, separation or even divorce and remarriage, Pope Francis said responses to the questionnaires sent around the world before the synod “showed that most people in difficult or critical situations do not seek pastoral assistance, since they do not find it sympathetic, realistic or concerned for individual cases.”

The responses, he wrote, call on the church “to try to approach marriage crises with greater sensitivity to their burden of hurt and anxiety.”

Particularly in ministry to divorced and civilly remarried Catholics, Pope Francis said, pastors must help each couple look at their actions and circumstances, recognize their share of responsibility for the breakup of their marriage, acknowledge church teaching that marriage is indissoluble and prayerfully discern what God is calling them to.

Pope Francis said it would be a “grave danger” to give people the impression that “any priest can quickly grant ‘exceptions’ or that some people can obtain sacramental privileges in exchange for favors.”

At the same time, he insisted, “the way of the church is not to condemn anyone forever; it is to pour out the balm of God’s mercy on all those who ask for it with a sincere heart.”

Divorced and civilly remarried couples, especially those with children, must be welcomed in Catholic parishes and supported in efforts to raise their children in the faith.

No new rules for reception of Communion

Generally, without an annulment of their sacramental marriage, such a couple would not be able to receive Communion or absolution of their sins unless they promised to live as “brother and sister.” But every situation is different, the pope said, which is why the church does not need new rules, but a new commitment on the part of pastors to provide spiritual guidance and assistance with discernment.

The diversity of situations — for example, that of a spouse who was abandoned versus being the one who left — makes it unwise to issue “a new set of general rules, canonical in nature and applicable to all cases,” the pope wrote. Quoting St. John Paul II, he said, “‘since the degree of responsibility is not equal in all cases,’ the consequences or effects of a rule need not necessarily always be the same.”

Pope Francis used the document’s footnotes to specify that the consequences include whether or not the couple might eventually be able to receive Communion: “This is also the case with regard to sacramental discipline, since discernment can recognize that in a particular situation no grave fault exists,” he wrote. Those who are in a state of serious sin are not to receive Communion.

Another footnote commented on the church’s request that remarried couples who had not received an annulment and who want to receive the sacraments forego sexual relations. “In such situations, many people, knowing and accepting the possibility of living ‘as brothers and sisters’ which the church offers them, point out that if certain expressions of intimacy are lacking, ‘it often happens that faithfulness is endangered and the good of the children suffers,'” he wrote.

Pope Francis wrote that he understood those “who prefer a more rigorous pastoral care which leaves no room for confusion. But I sincerely believe that Jesus wants a church attentive to the goodness which the Holy Spirit sows in the midst of human weakness, a mother who, while clearly expressing her objective teaching, always does what good she can, even if in the process, her shoes get soiled by the mud of the street.”

Putting conditions on mercy is ‘watering down the Gospel’

Turning to those who believe allowing divorced and remarried Catholics to receive Communion waters down church teaching on the indissolubility of marriage, the pope said, “we put so many conditions on mercy that we empty it of its concrete meaning and real significance. That is the worst way of watering down the Gospel.”

In many respects, Pope Francis wrote, church members themselves have presented and promoted such a dreary picture of married life that many people want nothing to do with it even though they dream of a love that will last a lifetime and be faithful.

“We have long thought that simply by stressing doctrinal, bioethical and moral issues, without encouraging openness to grace, we were providing sufficient support to families, strengthening the marriage bond and giving meaning to marital life,” he wrote. “We find it difficult to present marriage more as a dynamic path to personal development and fulfillment than as a lifelong burden.

“We also find it hard to make room for the consciences of the faithful, who very often respond as best they can to the Gospel amid their limitations, and are capable of carrying out their own discernment in complex situations,” the pope wrote. Yet, “we have been called to form consciences, not to replace them.”

The role of an individual’s conscience made frequent appearances in the document, not only regarding the situation of those who may determine their new union is best for their family, but also regarding decisions over how many children to have.

Pope Francis praised Blessed Paul VI’s encyclical “Humanae Vitae,” which insisted every sexual act in a marriage must be open to the possibility of pregnancy, and included a large section reiterating what has become known as St. John Paul II’s “Theology of the Body.”

Pope Francis called for church leaders to ensure more married couples are involved as leaders in designing and carrying out pastoral programs for families. Their witness is key, he said.

“Marital love is not defended primarily by presenting indissolubility as a duty, or by repeating doctrine, but by helping it to grow ever stronger under the impulse of grace,” he said. “A love that fails to grow is at risk. Growth can only occur if we respond to God’s grace through constant acts of love, acts of kindness that become ever more frequent, intense, generous, tender and cheerful.” 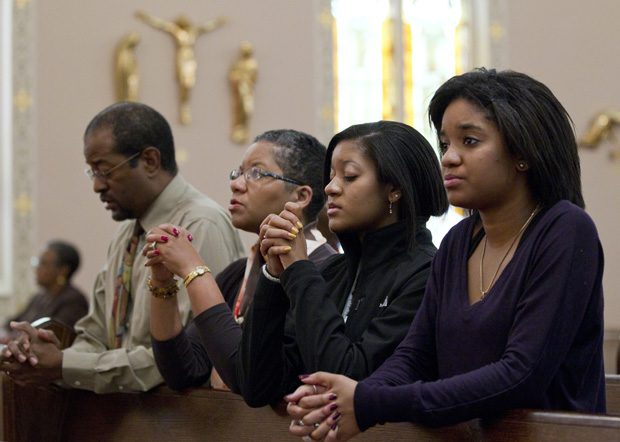 PREVIOUS: Catholics and Methodists can learn from one another, pope says

NEXT: Spirituality is essential in family life, pope says