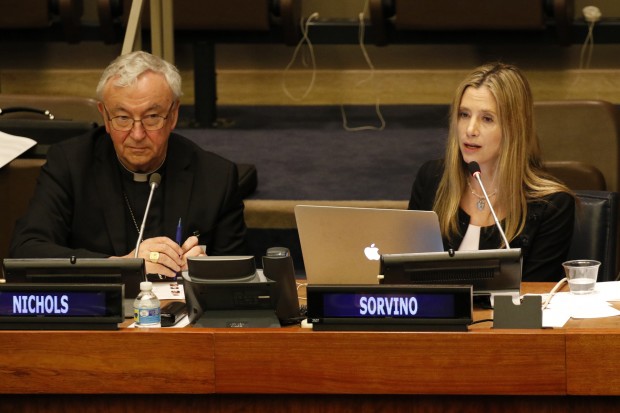 Actress Mira Sorvino, a U.N. goodwill ambassador for the global fight against human trafficking, addresses the audience during a conference on human trafficking April 7 at the United Nations in New York City. Looking on is Cardinal Vincent Nichols of Westminster, England. (CNS photo/Gregory A. Shemitz)

UNITED NATIONS (CNS) — Human trafficking is a $150 billion annual business that affects every country on earth and its eradication requires both traditional and atypical partnerships, speakers at an April 7 United Nations conference said.

The Holy See mission to the United Nations and the Santa Marta Group co-sponsored the forum in which more than two dozen speakers addressed “Ending Human Trafficking by 2030: The Role of Global Partnerships in Eradicating Modern Slavery.”

Human trafficking encompasses slavery and includes recruitment and transportation of vulnerable people using force, deception or coercion for the purposes of sexual exploitation, forced labor or service, servitude or the removal of organs.

Currently, more than 21 million people are held in human slavery, said Cardinal Vincent Nichols of Westminster, England. The number compares to 10 million to 12 million people enslaved during the trans-Atlantic slave trade of the 19th century, according to Kevin Hyland, the United Kingdom’s Independent Anti-Slavery Commissioner.

Mogens Lykketoft, president of the 70th session of the U.N. General Assembly, said trafficking is an invisible crime that lures people with the promise of a better life to exploitation in work as diverse as the sex industry, construction, fishing, farming and domestic service in prosperous homes. “It’s a world of winners and losers, and immense power imbalances,” he said.

Cardinal Nichols said human slavery and trafficking strips people of their fundamental dignity and reduces them to the status of a commodity. The scope of the problem is “an evil crying out to heaven” and “a mark of deep shame on the face of our human family that words alone cannot remove.”

People of goodwill must “rescue, protect, assist and serve the poorest of the Father’s children who have been sold into slavery, even as Joseph was sold into slavery in the beginning,” he said.

Pope Francis appointed Cardinal Nichols to lead the Santa Marta Group, an alliance of international police chiefs and bishops from 36 countries working with civil society to eradicate human trafficking and modern-day slavery. It was launched in 2014 and named for the pope’s residence, where participants in the initial conference stayed. The group grew out of a partnership established in London in 2012 between the Catholic Bishops Conference of England and Wales and the Metropolitan Police Service Human Trafficking Unit.

Cardinal Nichols said women religious in London worked with Scotland Yard in an “unlikely partnership” aimed at rescuing trafficked individuals and prosecuting their traffickers. He said early concerns that police would prosecute the victims faded over time as trust grew between the two groups.

The Santa Marta Group brings together the competence and duty of law enforcement, people with decision-making authority to implement strategic change, and the community and compassion of the church, resulting in huge incremental efficiencies in the fight against modern-day slavery, he said.

Cardinal Nichols said the cooperation is an example of the global partnerships that are essential for the United Nations to achieve its Sustainable Development Goals. The 17 goals adopted in September 2015 commit nations to a 15-year effort to end poverty, protect the planet and ensure prosperity for all. There are specific targets within the goals to eliminate violence against women, eradicate forced labor, and end modern slavery and human trafficking.

In many places, the Catholic Church has the “biggest reach” in a community and provides the opportunity for trafficked people to seek help and safety, Cardinal Nichols said. The church also has a role in raising awareness, and the extent and complexity of the situation should encourage people to tell their stories, check supply routes for the goods and services they buy and keep their eyes and ears open, he said.

Of his own awareness of the prevalence of slavery, he said, “So much is shocking, not the least of which, there is probably no town in the U.K. where slave labor is not being used … probably in the U.S., too.”

Commissioner Hyland said modern slavery is a booming $150 billion criminal business that will not be stopped until well-meaning individual efforts are funded and coordinated at the highest levels.

Actress Mira Sorvino, a U.N. goodwill ambassador for the Global Fight Against Human Trafficking since 2009, said victims cannot wait weeks or years for solutions. She contrasted the enormity of the problem with the paucity of the response. She said any tenable solution will require a combination of political will, increased funding, attention to the root causes, and holding perpetrators criminally liable for slavery and trafficking.

James Cockayne of the United Nations University said the actual cost of trafficking extends beyond the action of enslavement and trafficking. It causes depression, anxiety, vulnerability to re-trafficking for the victims and long-lasting poverty and exclusion from education for their children.

He said the “intergenerational” effects extend to the entire community, drive down productivity and impose a cost that is borne by everyone.

Cockayne said fighting against slavery is morally and economically a smart human development policy. Nonetheless, inspiring speeches and piecemeal collaboration implemented without a clear strategic plan “is sound and fury signifying nothing but costing a great deal.”

Donna Hubbard, a trafficking victim, great-grandmother and flight attendant, said trafficking has no color, gender, nationality or economic status. Her captors controlled her with threats against her children as she was “sold or traded for sex, drugs, money and even weapons.”

Hubbard, a minister and member of several groups that work against prostitution and trafficking, said. “We can no longer ignore this as something that happens to someone else.”

Lourdes O. Yparraguirre, Philippines ambassador to the U.N., said 10 million Filipinos have migrated overseas in the past 40 years. The country tries to protect them with programs that require recruitment agencies to register with the government, sign contracts and guarantee minimum wages.

Archbishop Bernardito Auza, the Vatican ambassador to the United Nations, opened the conference with a letter from Pope Francis. The letter said modern slavery and human trafficking are a “scourge throughout the world today” and urged governmental, civic and religious organizations to combat this “crime against humanity.” The pope wrote, “I encourage you to strengthen the bonds of cooperation and communication which are essential to ending the suffering of the many men, women and children who today are enslaved and sold as if they were a mere commodity.”

“I hope also that you will keep before you the dignity of every person, and recognize in all your endeavors a true service to the poorest and most marginalized of society, who too often are forgotten and have no voice,” he wrote.

Pope Francis assured participants of the “steadfast commitment of the Catholic Church to fight against this crime and care for all its victims.”

NEXT: Pope urges kidnappers to release captives, including Salesian in Yemen