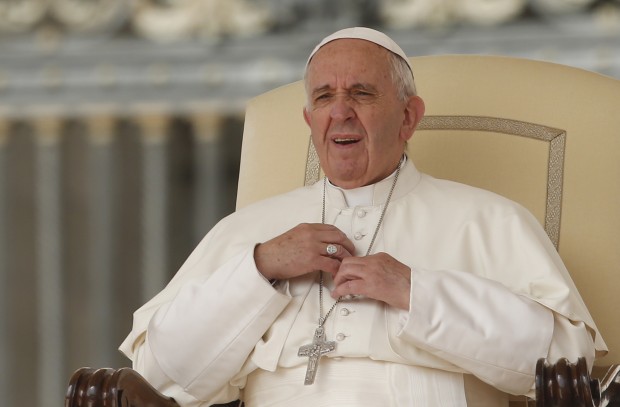 VATICAN CITY (CNS) — A heart that clings to the letter of the law is closed to the Holy Spirit and God’s truth, Pope Francis said at morning Mass.

Such hardened hearts often were behind the persecution of innocent men and women seeking to follow God’s will, the pope said April 11 in his homily during Mass in the Domus Sanctae Marthae, where he lives.

“This is the role model of Jesus, who, in order to be faithful and having obeyed the word of the Father, ends up on the cross,” he said.

The day’s first reading, from the Acts of the Apostles, recounted how Stephen, who was filled with God’s grace and power, “was working great wonders and signs” among the people, which raised the ire of a number of leaders. Stephen was brought before the Sanhedrin with false accusations of blasphemy.

This incident shows how “the heart closed to God’s truth is only clinging to the truth of the law, of the letter,” the pope said, “and finds no other way out than with lies, false testimony and death.”

Those who opposed and harshly condemned the work of the prophets, he said, then “washed their hands (of everything) and judged themselves pure.”

The pope said he is especially saddened when he reads St. Matthew’s account of Judas deeply regretting his betrayal of Jesus, and yet — seeking repentance — finds nothing but indifference and derision from the chief priests and elders.

When Judas tries to give back the 30 pieces of silver he took from them to betray Jesus, the priests respond: “What is that to us? Look to it yourself.”

The pope said this reflects “a heart closed before this poor repentant man, who didn’t know what to do.”

“And what do they do when Judas goes to hang himself? Do they talk and say, ‘Oh, poor man.’? No. Immediately money. ‘This money is the price of blood. It cannot go in the temple.'” Their narrow focus on rules and not the man’s fate characterizes these “doctors of the letter,” he said.

The pope asked that people pray God helps them the same way he helped the bewildered and confused disciples on the way to Emmaus. Pray that God looks just as tenderly upon “the little and great foolishness of our heart, caresses us and tells us ‘Oh foolish and slow of heart’ and begins to explain things to us.”

NEXT: Summit looks at role global partnerships must play in ending trafficking