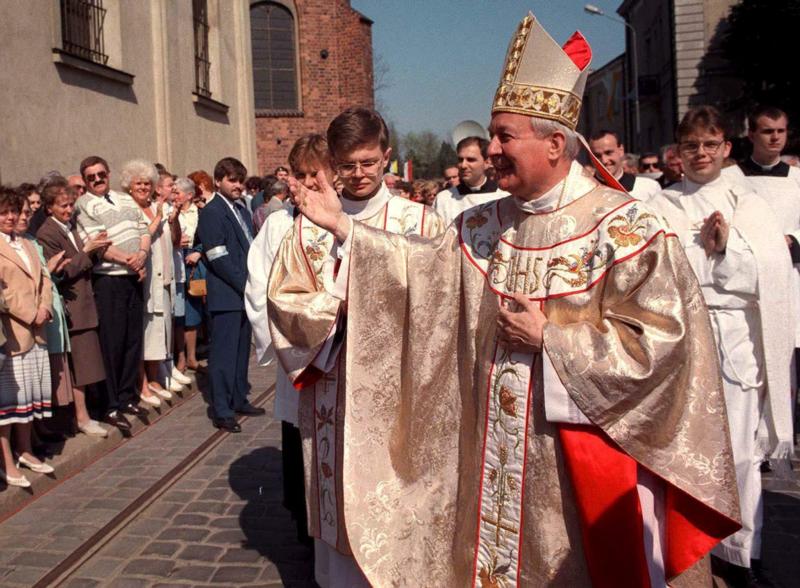 Archbishop Juliusz Paetz, formerly of Poznan, Poland, is pictured in an undated file photo. Archbishop Paetz, who resigned in 2002 after being accused of sexually molesting Catholic seminarians, has been warned by the Vatican to stay away from commemorations of Poland's Christian conversion and an upcoming visit by Pope Francis. (CNS photo/Remigiusz Sikora, EPA)

WARSAW, Poland (CNS) — A Polish archbishop who resigned after sexually molesting Catholic seminarians has been warned by the Vatican to stay away from commemorations of Poland’s Christian conversion and an upcoming visit by the pope.

“The Holy Father decisively reiterates his invitation for you to live a life of privacy in repentance and prayer,” said Archbishop Celestino Migliore, the Vatican’s Warsaw-based nuncio.

“Media news about your participation in official celebrations of the anniversary of Poland’s baptism has created a new situation of unnecessary and harmful commotion for the church in Poland and the Holy See. It blatantly contradicts the instructions given you.”

The letter to Archbishop Juliusz Paetz, formerly of Poznan, was released April 13 by the Polish bishops’ conference after the archbishop told local journalists he saw “no reason” not to take part in the April 14-16 Poznan celebrations, which were to be attended by Cardinal Pietro Parolin, Vatican secretary of state.

Meanwhile, the bishops’ conference press office said the archbishop had been warned by the Vatican in 2013 to “refrain from participating in public celebrations,” adding that it was “hard to imagine” he would again ignore the order during the pope’s July 27-31 visit to Poland for World Youth Day in Krakow.

However, the archbishop continued living at the Poznan curia and participating in church events, including the consecration of bishops, as well as attending audiences with the pope in Rome, where he worked, 1967-1982.

In 2006, he was shown on Polish TV greeting Pope Benedict XVI during the now-retired pope’s visit, while in 2009 a telegram from the pope was published at Archbishop Paetz’s request in a Catholic weekly, congratulating him on his “fruitful service” and “saving work for the good of the church.”

Jesuit Father Federico Lombardi, Vatican spokesman, confirmed in June 2010 that the archbishop’s “rehabilitation was without foundation,” adding that removing a 2002 ban on administering sacraments in his former diocese would depend on Poznan’s current archbishop, Stanislaw Gadecki, who is also president of the Polish bishops’ conference.

Celebrations of the 1050th anniversary of Poland’s Christian conversion under King Mieszko I in 966 are to include Masses and vigils, as well as a commemorative Poznan session of the Polish parliament.

NEXT: Selfless witness is needed in culture hostile to the Gospel, pope says