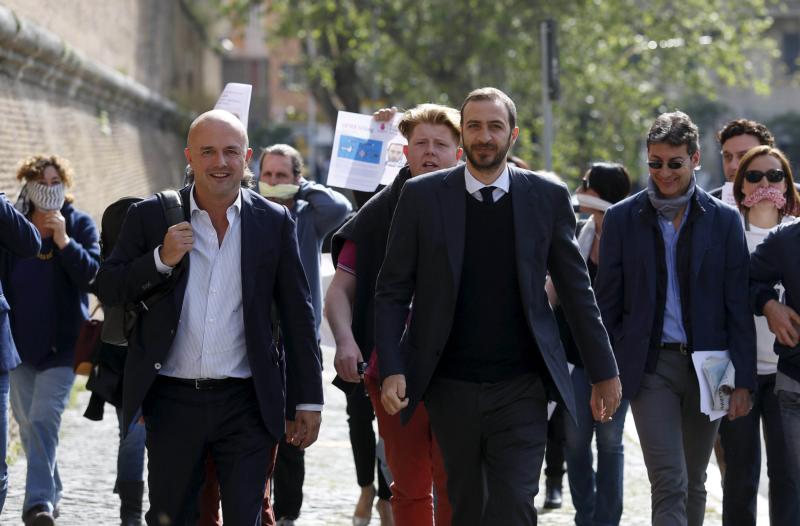 Journalists Gianluigi Nuzzi and Emiliano Fittipaldi, center, walk to their trial April 6 at the Vatican. Nuzzi and Fittipaldi are accused by the Vatican of soliciting the documents and exercising pressure on the defendants, especially Msgr. Vallejo Balda. (CNS photo/Remo Casilli, Reuters)

VATICAN CITY (CNS) — An Italian journalist said he was given private documents by a Vatican official detailing problems with financial reforms and that he had a duty to publish them.

Testifying at his Vatican trial April 13, Gianluigi Nuzzi, author of “Merchants in the Temple,” denied pressuring Spanish Msgr. Lucio Vallejo Balda, secretary of the Prefecture for the Economic Affairs of the Holy See, for access to the documents.

Nuzzi and Italian journalist Emiliano Fittipaldi, author of “Avarice,” are accused by the Vatican of soliciting the documents and exercising pressure on the defendants, especially Msgr. Vallejo Balda.

The monsignor, along with his former executive secretary and assistant, Nicola Maio, and Francesca Chaouqui, a member of the former Pontifical Commission for Reference on the Economic-Administrative Structure of the Holy See, are accused of “divulging news and documents concerning fundamental interests” of the Vatican.

Nuzzi said he was first informed of the challenges facing the commission’s financial reform by Chaouqui, whom he had known for some time. She then organized a meeting between the journalist and Msgr. Vallejo Balda at Rome’s Ambassador Hotel.

During that meeting, Nuzzi said, the monsignor detailed opposition and threats to the reform.

“(Msgr. Vallejo) Balda on that occasion told me that the situation was alarming, and subsequently — in a photo sent on WhatsApp — showed me a safe opened with a blowtorch, which I thought was a dangerous gesture, a warning. It was there that I realized what I was getting into,” Nuzzi said.

The Italian journalist said Msgr. Vallejo Balda offered him the password to his personal email, which contained several documents that proved his words “were true” and that the monsignor “was not a compulsive liar.”

“(Msgr.) Vallejo Balda was my editor; when I did not understand something, I would ask him and he would explain it to me,” Nuzzi said.

Nuzzi denied pressuring the monsignor for information, citing a WhatsApp message in which he declined Msgr. Vallejo Balda’s offer to give him the recently changed password to the monsignor’s email account.

Asked if he had requested the monsignor’s email address, Nuzzi replied, “I would hope that’s not a crime in this state,” referring to Vatican City.

The journalist was also questioned on Chaouqui’s role in leaking documents. He affirmed that she only introduced him to the monsignor and was not part of any discussions regarding the commission’s work.

However, he testified that after hearing that Chaouqui was speaking to other journalists, he believed she was prone “to creating a big mess.”

Asked at the trial what he meant, Nuzzi replied, Chaouqui was “unreliable.”

He also refused to disclose the name of the source who provided him with an audio recording of Pope Francis speaking at a private budget meeting.

Nuzzi asserted that when he received the confidential documents from Msgr. Vallejo Balda and his other source, “It was my duty to publish it.”

“I couldn’t not do my work,” he said. “When I come across news, it is my job to publish it. Having these documents, what should I have done, keep them in the drawer?”