Come to the cathedral, meet your new priests 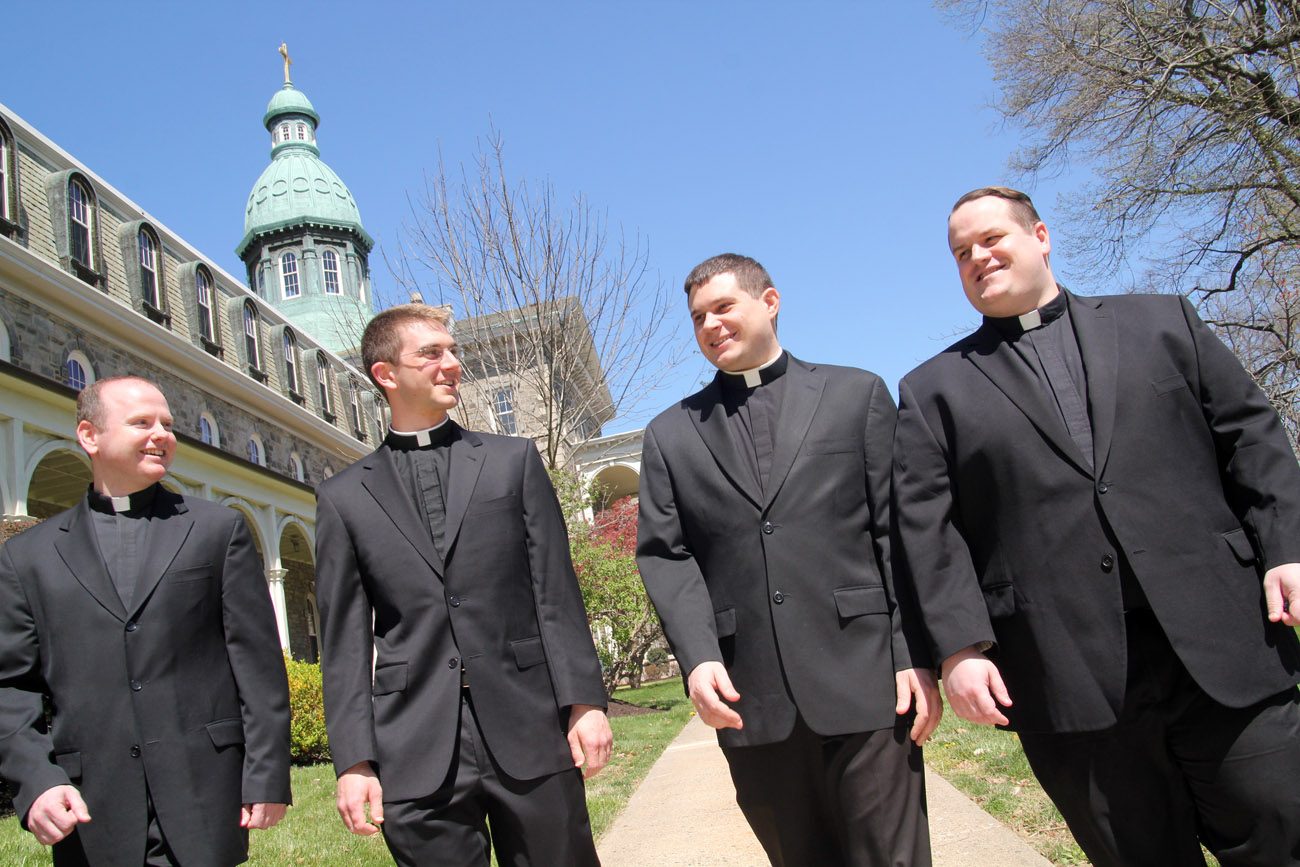 The four men to be ordained priests for the Archdiocese of Philadelphia on May 21, shown this spring at their alma mater, St. Charles Borromeo Seminary, are (from left): Deacons Matthew Windle, Matthew Biedrzycki, Thomas O’Donald and Mark Cavara. (Photo by Sarah Webb)

It’s going to rain this Saturday morning. So park the lawnmower and put off the errands until the afternoon, and thank God for one special gift. Four new priests will be ordained for the Archdiocese of Philadelphia.

You can say a quiet prayer in your heart, of course. But do yourself a favor and walk into the Cathedral Basilica of SS. Peter and Paul before 10 a.m. and attend the ordination Mass. You don’t need a ticket and everyone is welcome.

If you’ve never witnessed an ordination you’re in for a treat. The liturgical movements of prayers and songs, of word and sacramental action, are always top notch; but it’s the latter that strike me as resonant particularly this year.

As at every priestly ordination, the bishop, in this case Archbishop Charles Chaput, will anoint the palms of the men to be ordained with aromatic sacred chrism, and the priests and bishops in attendance will one by one place their hands on the heads of the men and pray briefly.

But one other action stands out vividly. The four candidates to be ordained – Deacons Matthew Biedrzycki, Mark Cavara, Thomas O’Donald and Matthew Windle – will lie face down on the cathedral’s hard marble floor as the sung prayers of the faithful wash over them throughout the church.

Priests often have told me this moment was the most moving in a ceremony they or their families will never forget.

The act of prostrating oneself before the Lord Jesus, whose priest they will become, and doing so publicly in the presence of the assembly of the faithful, is one of profound humility. It says a lot about these men and the church at this time.

Each man had entered St. Charles Borromeo Seminary to begin actively discerning their vocation to priesthood only a couple years after the first Philadelphia grand jury report on sexual abuse of minors in the church, in 2005.

During the course of their studies a second grand jury report would come out in 2011. A year later, the archdiocese to which they were planning to devote their life-long ministry hit financial rock bottom, along with an unprecedented crisis of confidence among parishioners.

Things have brightened a bit, but the way ahead is still uncertain, to say the least.

And into this step soon-to-be Fathers Biedrzycki, Cavara, O’Donald and Windle. Judging by some of their comments in CatholicPhilly.com’s series of profiles on each man, they seem intelligent and gifted enough to walk the road ahead unafraid.

These men could have assessed their archdiocese and said, “no thank you,” and sought ordination in another diocese or a religious order. It is interesting that they report no seminarian they knew of left the seminary because of the clergy abuse scandal, the financial crisis or the recent parish mergers.

These men present a sense of confidence that Christ never abandons his church, and sends the Holy Spirit to console and strengthen. Despite the troubles and shifts of the civil and church cultures of our times, Christ calls men to serve his people as priests.

In ordination he calls them face down onto the floor, and after the most ardent prayers to the Father, he raises these men up to lead all souls back to God along the path of mercy – the faithful ones and those who may have wandered off.

Our four new priests are about to begin ministering to a world that their older brothers in the priesthood could not have imagined 40, 20 or even 10 years ago.

Yet the basics remain – Catholics still seek the sacraments, spiritual guidance and leadership. The world still needs models of holiness to show it is still possible for each of us, with all our gifts and our sins, to receive God’s mercy and live each day in his joy.

No one is telling these new priests it will be easy, but they already know that. Effective priestly ministry in the years ahead will take faithfulness and creativity, as it always has.

I am confident Father Matt, Father Mark, Father Tom and Father Matt already have the willingness to meet people in every circumstance and offer the spiritual medicine that is so very needed today.

As these men rise from their bellies off the cathedral floor, they should know that the people of the archdiocese “have their backs,” in fervent prayer, as they begin their priestly ministry.

PREVIOUS: How much should you give to the needy? Give more

NEXT: If parish is ‘dictatorship,’ what’s a member to do?