Chaplain’s duty is to bury the dead, but he also ministers to the living 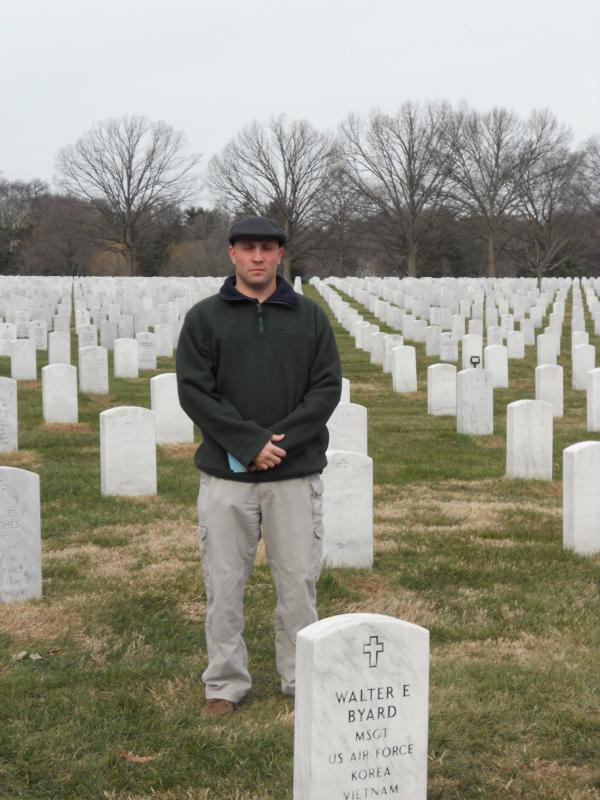 At the burial site, eight young soldiers flanked Andre’s flag-draped casket while Father Brankatelli conducted the rite of Christian burial for the third time that day.

“I was assigned to Arlington National Cemetery in May of 2014,” the priest said later. “Since then, my responsibilities Monday through Friday are to bury the dead.”

Although he considers the work at the cemetery an honor, Father Brankatelli said he volunteered for the chaplain corps to help the living. A parochial vicar in the Diocese of Cleveland, he was aware of the shortage of military Catholic chaplains. Then a parishioner helped him understand how this affects individuals. During the man’s deployment to Iraq, he could not attend Mass or receive the sacraments for six months.

“That broke my heart,” Father Brankatelli said. “We’re sending our men and women in uniform to protect our freedoms and we’re not even providing them the most basic essentials of their faith.”

Chaplains in the armed forces are essentially “on loan” to the U.S. Archdiocese for the Military Services, based in Washington. A priest must get permission from his bishop or religious superior to sign up.

With the permission of his bishop, Cleveland Bishop Richard G. Lennon, Father Brankatelli became an Army chaplain in 2012. He soon was ministering to troops in Afghanistan.

These days, he shares an office with two Protestant chaplains in the administration building at the cemetery, which is just across the Potomac River from Washington. He wears a dress uniform instead of vestments at graveside services, and he buries as many as six men and women each day, in rain, wind and snow, in blistering heat and suffocating humidity.

“I maintain a level of priesthood in other capacities just to keep myself more balanced.”

On weekends, he volunteers to hear confessions and celebrate Mass in parishes or on military installations. Last year, he assisted with the Rite of Christian Initiation of Adults program on a nearby base.

“Even our Lord and Savior died, but he rose again,” Father Brankatelli said. “We believe in his Resurrection. We believe in eternal life to come.”

He said it is difficult to maintain composure during particularly affecting services, however.

“I was taught by a former cemetery chaplain that if you do become emotional — and I have a few times — just stop, take a moment,” Father Brankatelli said. “Don’t apologize for displaying emotions, and begin when you’ve composed yourself.”

He and other chaplains confide in one another after such incidents.

“We all understand the work that we do,” Father Brankatelli said.

For the most part, Father Brankatelli buries veterans who served during the Vietnam War or earlier. Current soldiers are often suicides.

“We are losing more service members to suicide than to combat,” he said.

The priest finds especially moving the ceremonies for soldiers who died overseas but whose remains were not located or identified until decades later.

“(It’s) the sense of relief I see in families when they can finally bury their loved one,” Father Brankatelli said.

Although he did not know them in life, the priest tries to learn about the individuals he buries. At least a week before the service, he telephones the deceased’s next of kin to confirm details such as pronunciation of name, highest rank and years of service, as well as the family’s preferred Scripture reading. When he meets the mourners on the burial day, he often encourages them to tell him about their loved one.

“Especially when it’s not a tragic death,” he said. “When you’re celebrating the life of a person eighty, ninety, even a hundred years old — there’s so much to a person’s life.”

As a result, Father Brankatelli has developed a deep appreciation for Americans interred in Arlington National Cemetery.

“There are a lot of soldiers who may not have had (military) decorations, but who lived remarkable lives,” he said. He recalled a World War II veteran, an only child and a lifelong bachelor who died at age 100 with no living relatives. More than 50 people attended his service.

“I was surprised to see how many friends this man had,” Father Brankatelli said. He has buried a Medal of Honor recipient, former prisoners of war and refugees who enlisted in the U.S. Army after fleeing Communism. He equally respects civilians, such as Army wives who assumed sole responsibility for families during their husbands’ absence.

“Hearing these stories of Americans and their service and sacrifice, their spouses and families … that for me has been the greatest reward,” he said of his assignment.

The Army will transfer Father Brankatelli this summer, but his time at Arlington will hold a special place in his memory.