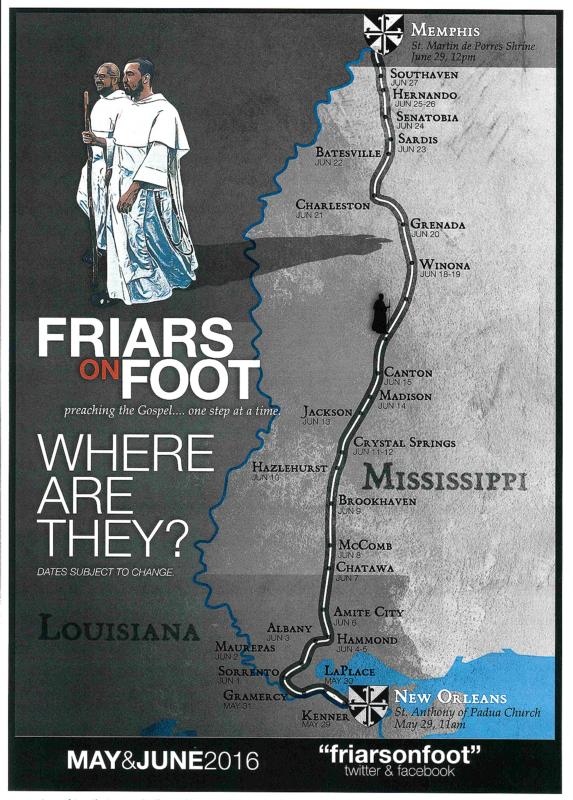 NEW ORLEANS (CNS) — The idea of making a walking pilgrimage in the United States took root about four years ago when Dominican Fathers Francis Orozco and Thomas Schaefgen were studying together for the priesthood.

They saw the movie, “The Way,” featuring Martin Sheen, who portrayed a father honoring his late son’s memory by completing the 450-mile Camino de Santiago, the “Way of St. James,” a pilgrimage route across Spain taken for centuries by pilgrims.

“We had both studied abroad in Spain, but we thought, why don’t we do something more local, something in this country?” said Father Orozco, chaplain of the Catholic Student Center at Texas Tech University in Lubbock. “We looked up places, and there really weren’t any established pilgrimages in the U.S., so we said, ‘Let’s make up our own.'”

From that seed sprouted “Friars on Foot,” a 478-mile pilgrimage on foot from New Orleans to Memphis, Tennessee, which will begin after the 11 a.m. Mass at St. Anthony of Padua Church in New Orleans May 29 and arrive in Memphis June 29.

Father Orozco, 33, and Father Schaefgen, 32, who is director of the Catholic Student Center at Tulane University, will wear their white Dominican habits and take small backpacks with water and other essentials such as sunscreen, but they will carry no money or cellphones.

“We want to do this very minimally,” Father Orozco told the Clarion Herald, newspaper of the Archdiocese of New Orleans.said. “We will not carry any money and we will sort of beg. We hope people will provide us with apples and granola bars. We don’t plan to use any money. We will carry ID cards and medical insurance cards in case that’s needed. We’ve compromised with our superior that we will have somebody update the website every time we reach a destination.”

The friars plan to stay overnight at Catholic churches or with Catholic families along the way, celebrating Mass and even giving history and vocation talks about the 800-year-old congregation — the Order of Preachers — whose earliest members were itinerant preachers, walking from town to town.

They will average about 16 miles a day. There are only two stops in Mississippi without Catholic churches — Pickens and West — and on those nights they probably will stay at a local Protestant church.

The friars are encouraging people to join them on the walk, if only for an hour or two.

“We will have a pilgrim rule, and part of it will be to the pray the rosary and the Liturgy of the Hours every day, but that won’t take up the entire time,” Father Orozco said. “If there are people with us, we can talk about whatever they would like to talk about.”

Since walking along interstate highways is prohibited, the Dominicans will take local and state highways. The pilgrimage route will basically track Highway 51 north to Memphis.

The pilgrimage will conclude June 29 at St. Peter Church in Memphis, the National Shrine of St. Martin de Porres.

So what do their families and their fellow friars think?

“As we progressed, the first reaction was the question ‘why’?” Father Orozco admitted. “Then it was just a matter of explaining. In many ways, I’m glad it’s taken four years to plan it because it gave them time to soften up to the idea. We presented this to the province a couple of years ago, and I think the vague response was, ‘These are young guys. Once they’re ordained priests they’ll forget about it.'”

“I bet some of the friars forgot about it,” Father Orozco said. “Some said, ‘I guess they’re really going.’ I had one student tell me, ‘You know, it’s very humid in Mississippi, right?’ By and large, 99 percent are excited about it.”

NEXT: Chaplain’s duty is to bury the dead, but he also ministers to the living