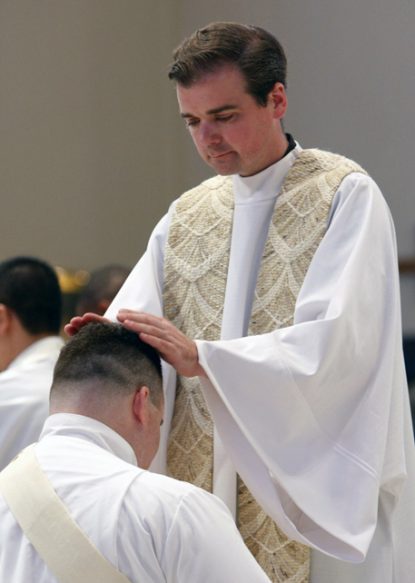 Marianist Father James Williams is seen during the ordination of priests at St. Agnes Cathedral in Rockville Centre, N.Y., in 2008. The Marianists’ Province of Meribah suspended Father Williams after a through investigation of allegations of misconduct and abuse of a minor by the former high school president were found to be credible. The priest denied the claims. (CNS photo/Gregory A. Shemitz)

MINEOLA, N.Y. (CNS) — The Marianists’ Province of Meribah suspended Father James Williams after “a comprehensive and extensive investigation” into allegations of misconduct and abuse of a minor by the former high school president were found to be credible.

Father Williams, who resigned as president of Marianist-run Chaminade High School in Mineola in 2011 after 12 years in the post, is prohibited from functioning publicly as a priest. He remained part of the faculty and administration at the all-boys school until 2012. He first joined the staff there in 1991.

The school posted a statement about Father Williams’ status on its website May 13. It also stated that the priest “has completely denied the allegations.”

In a letter to parents posted May 15, the current president of Chaminade said he was “writing with a heavy heart” but was “confident that as a united school community, we will meet the challenges of this past week.”

Marianist Brother Thomas J. Cleary said the province’s “findings are unequivocal,” but he also discussed when the allegations were first made known to the Marianists, saying there “appears to be some confusion” over the timeline.

He said the province “immediately launched an investigation” in February 2015 when informed of the claims by the Diocese of Rockville Centre, the diocese in which Mineola is located.

The province hired independent investigators look into the allegations and found one of the alleged incidents dated back to 2011, when the individual involved was a minor, Brother Cleary said. At that time, he said, the Nassau County District Attorney’s Office was notified; the office undertook its own investigation.

“I want to assure each and every one of you that we have made a solemn pledge to ensure that the young men entrusted to our care are safeguarded from any form of harm or abuse,” Brother Cleary wrote in his letter to parents. “We take most seriously the sacred bond that exists between us as educators, you as parents, and our students as your sons and sons of God.”

Chaminade High School is one of three schools run by the Marianists on Long Island, The other two are Kellenberg Memorial High School and St. Martin de Porres Marianist School for pre-kindergarten through eighth grade. Both of those schools are in Uniondale.

NEXT: Martyrs’ Shrine could have new ownership; plans for its future underway