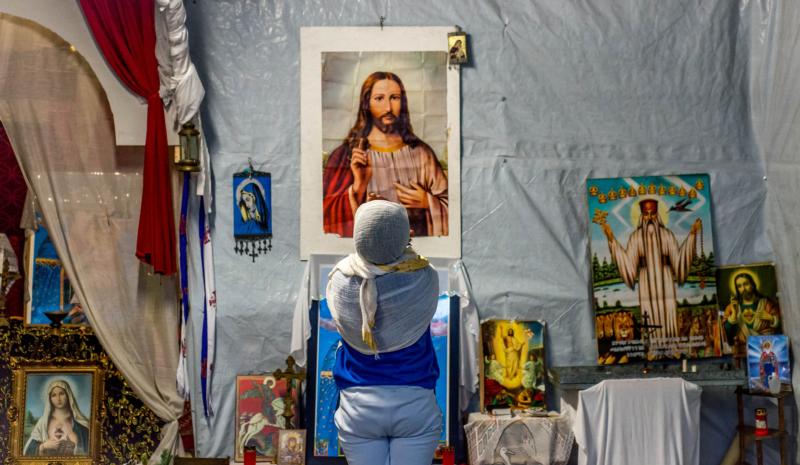 A refugee prays in front of an image of Christ in a makeshift church in a camp called "The Jungle" in 2015 in the port of Calais, France. (CNS photo/Stephanie Lecocq, EPA)

“Regrettably, things have not improved, and in some places, things have gotten worse,” said George, a Princeton University law professor and director of the university’s James Madison Program in American Ideals and Institutions, during a May 2 telephone news conference coinciding with the release of the commission’s annual report.

“At best, in most of the countries we covered, religious conditions have failed to improve in any demonstrable way. In most cases, they have spiraled downward,” he added.

The 2016 report, covering the year from March 1, 2015, to Feb. 29, 2016, notes the nations labeled by the State Department to be “countries of particular concern” for their treatment of its citizens’ religious rights: China, Eritrea, Iran, Myanmar, North Korea, Saudi Arabia, Sudan, Turkmenistan and Uzbekistan. Four of the countries — China, Iran, Myanmar and Sudan — have had the designation since it was first issued in 1999. An 11th nation, Tajikistan, was added by the State Department in April.

Myanmar, formerly Burma, remains on the list despite its transition from a military regime to a civilian government. “Among the displaced were thousands of Rohingya Muslims forced to flee their homes in Burma, joining other Rohingya already displaced internally. While last year’s general elections marked the country’s bid to emerge from its past as a military dictatorship, the government enacted four discriminatory ‘race-and-religion’ bills that not only effectively disenfranchised as many as one million Rohingya, but also denied them the right to contest the elections,” the report said. “These measures reflect a legacy of their brutal persecution by both government and society, which contributed to the refugee crisis.”

The commission identified seven countries that it recommends being added to the State Department list: the Central African Republic, Egypt, Iran, Nigeria, Pakistan, Syria and Vietnam.

Another 10 countries were labeled by the commission as being “Tier 2” for their restrictions on religious practice: Afghanistan, Azerbaijan, Cuba, India, Indonesia, Kazakhstan, Laos, Malaysia, Russia and Turkey. The commission also monitored the situation in Bahrain, Bangladesh, Belarus, Kyrgyzstan, Western Europe and the Horn of Africa.

The terror attacks late last year in Paris and Brussels “produced backlashes against Muslims by members of the wider society, in which Muslims often are blamed collectively,” the report said. “Mosques have been given police protection in several countries, and European Union officials have stressed the importance of not stigmatizing all Muslims.” Moreover, the number of French Jews leaving France for Israel quadrupled, from 2,000 to 8,000, it added.

The only nations and regimes to have had the country of particular concern label withdrawn are the Slobodan Milosevic regime of the former Yugoslavia in 2001, the Taliban regime in Afghanistan in 2003, Iraq in 2004 and Vietnam in 2006.

George cited one example in Vietnam as particularly distressing. A Vietnamese religious figure had met with Rabbi David Saperstein, U.S. ambassador-at-large for religious freedom, who was visiting Vietnam. Almost immediately after the meeting, the Vietnamese activist was arrested by authorities.

“Egypt and India’s presidents have made positive remarks” regarding religious freedom, George said. “But rhetoric doesn’t really matter unless it is accompanied by action.”

India is a Tier 2 country, George said, because of “political violence and societal violence. It has also failed to reform a criminal justice system that fails to prosecute attackers in a timely manner. This leads to a sense of impunity.”

George said he hoped the United States would become more welcoming to refugees fleeing religious persecution in their homelands.