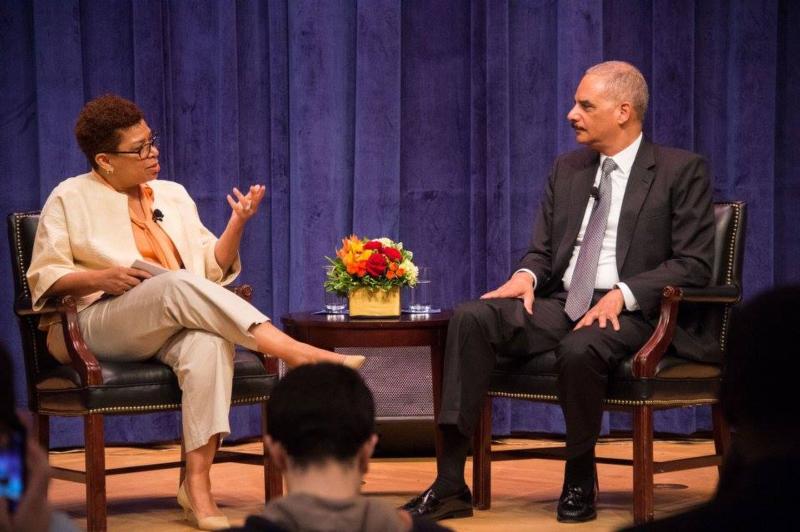 WASHINGTON (CNS) — Former Attorney General Eric Holder added his voice to the call for slavery reparations during a program at Jesuit-run Georgetown University.

Such reparations can take a variety of forms and may not necessarily mean cash payments to descendants of slaves, Holder said in a response to a question from a student during an April 29 program on race and justice.

Reparations, he said, “can mean a whole bunch of different things. You can come up with policies that take into account what slavery meant then, what it means now. Affirmative action can be thought of as reparations, you know? And it takes into account … the negative impacts of negative racial policies that have hobbled the progress of African-Americans, people of color in this country.”

Holder’s comments came after a student asked him about the growing body of knowledge of the sale of 272 slaves by the Jesuit administrators in order to pay off the school’s debts in 1838.

University accounts used to assert that all the slaves, which were held on a Maryland plantation, had died not long after the sale to sugar plantations in Louisiana. The independent Georgetown Memory Project, founded last year to trace living descendants of those slaves, has estimated that there could be as many as 15,000.

Holder, U.S. attorney general from 2009 to 2015, recalled the oral arguments in Grutter v. Bollinger, the Supreme Court case that upheld affirmative action at the University of Michigan’s law school in 2003. Writing the majority opinion, Justice Sandra Day O’Connor wrote, “We expect that 25 years from now, the use of racial preferences will no longer be necessary to further the interest approved today.”

“And I remember thinking to myself, all right, well, you know, if we’re going to look at it that way, when do we say that discrimination ended? People say, oh, it’s been a hundred-some years since slavery ended. Really? OK. That’s 1865. Brown v. Board of Education is 1954, Civil Rights Act is ’64. Voting Rights Act is ’65.

“A lot of the attitudes that we associate with slavery and the post-slavery era are still resonant, you know, in the United States now. And if we’re not willing to admit that — and it’s not even a question of admitting it, you know? Study it, understand it, realize it — deal with the facts,” he added.

Holder recalled a recent conversation “with a bunch of folks up in Philadelphia — it just happened to be a bunch of Republicans who were all assuring me that they were not supporters of Donald Trump. And I remember one young kid, very bright kid, and he said, ‘Why should I have to pay for things that I didn’t do? Why should I have to be penalized?’

“That’s seeing it as a zero-sum game, you know? That’s like if something happens to somebody here that is positive and is tied to trying to deal with historical wrongs, that necessarily means that you are negatively impacted, when the reality is we ought to be thinking about how that makes the pie more fair, how it probably expands the pie, and at the end of the day increases opportunities for everyone and is better for the nation, you know, as a whole,” Holder said.

Last year, Georgetown announced that it would rename two buildings named for school presidents who organized the slave sale. Both now have temporary names until permanent names are chosen.