Countries asking for help to handle millions of refugees 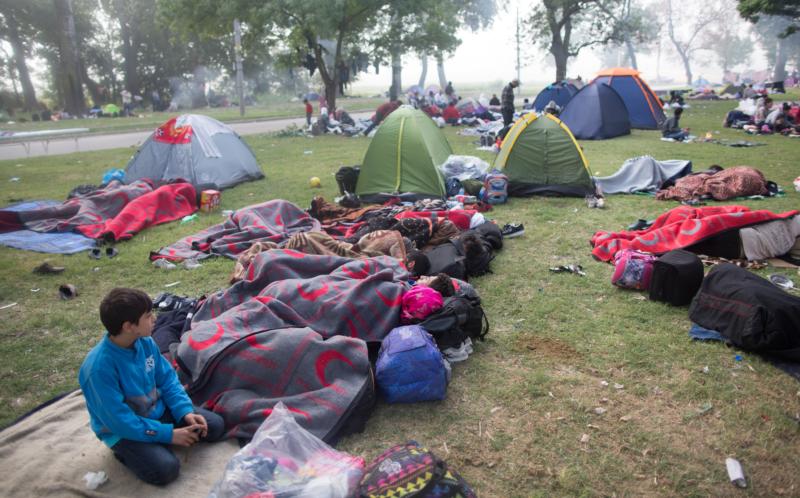 Syrian refugees rest at a in park in 2015 as they wait for permission to pass the Turkish-Greek border in Edirne, Turkey. A U.N. summit set to take place in Istanbul May 23-24 seeks more efficient, sustainable and humanitarian ways of helping the world's millions of refugees. (CNS photo/Tolga Bozoglu, EPA)

ISTANBUL (CNS) — Syrian refugee Mohammed Noman, 19, sells daily bus tours of Turkey’s major attractions to Arabic-speaking clients. On a recent afternoon break from his small kiosk on Cumhuriyet Caddesi, a main street in Istanbul, he smoked cigarettes and recounted how he ended up there.

“I wanted to finish school, join the marines and be the captain of a ship … but my father was falsely accused of inciting anti-government riots, and we had to leave Syria,” Noman told Catholic News Service April 29.

He explained how, almost five years ago, he, his parents and his older sister had fled their home in Syria, out of fear his father would be jailed or killed. They spent six months in displacement camps on Syria’s border with Turkey before crossing over and living for another two years in the aid camps funded by Turkey’s government, in the Turkish city of Kilis.

The family then headed for Istanbul, Turkey’s biggest city, where they rented a small apartment with the last of what they had managed to save from years of operating a successful restaurant in pre-war Syria.

Noman said he and his father now work in tourism, while his sister teaches in an Istanbul school for Syrian refugee children. His mother maintains the apartment, cooking and cleaning, and raising a new addition to the family, a 3-month-old baby girl.

The family was still struggling to make ends meet with underpaid, unofficial jobs, he said.

“I can’t study here, we don’t have the means. We are all working — me, my father, my sister — and still we are barely getting by,” said Noman, whose family is from Syria’s ethnic Turkmen minority and speaks Turkish.

He said he thought his family’s situation would improve if they were given citizenship in Turkey, which would allow them “a sense of security,” and “more stable … higher-paying” jobs, or if given asylum to Canada, Europe or America.

“There has to be a solution,” said Noman, a bit later, and back on duty at the kiosk.

Not far away in the same city, preparations were underway for a U.N. summit aimed at addressing the needs of Noman and the world’s other refugees and displaced, who number roughly 50 million and 40 million, respectively, according to U.N. figures.

As many as 5,000 participants representing governments, businesses, aid organizations, civil society, affected communities and youth are expected to attend the May 23-24 World Humanitarian Summit, called for by U.N. Secretary-General Ban Ki-moon to find more efficient and humane methods of handling crises caused by war and other disasters. The Vatican is sending a contingent of more than a dozen people, including representatives of Caritas Internationalis, the church’s umbrella organization for aid agencies.

Countries most affected by the refugee crises are expected to appeal at the summit for assistance.

Turkish officials, caring for more than 2 million refugees fleeing conflicts in neighboring Syria and Iraq, say issues such as ensuring sustainable humanitarian financing should be at the core of summit discussions.

“There are simply too many lives at stake and inaction is not an option,” Turkish Foreign Minister Mevlut Cavusoglu said in reference to the summit.

Catholic charity groups say they will be advocating at the summit for more localized humanitarian responses that emphasize dignity and safety in humanitarian action, in the spirit of Pope Francis, who has called for compassion in dealing with the world’s refugees and displaced.

During an April visit to a refugee camp in Greece, Pope Francis said that while the concerns of hosting governments were “understandable and legitimate,” one must never forget that “migrants, rather than simply being a statistic, are first of all persons who have faces, names and individual stories.”

He returned to Rome with 12 of the refugees, all Syrian Muslims, and the Vatican is providing for their needs.

A major obstacle facing the summit will be the fact that conflicts and their resulting refugee crises are lasting longer than in previous years, taking unprecedented tolls on the refugees as well as on the nations and agencies trying to help them, according to humanitarian officials.

“I think the global humanitarian community is in something of a crisis and I include the U.N. very much in that,” said Eamonn Meehan, executive director of the Irish Catholic international aid agency Trocaire.

“Part of it is that the scale of crises is unprecedented and what is new is the longevity of these crises. They tend no longer to be just a couple of years or five years, many of these are generational. If you look at Somalia for instance, or South Sudan, or Myanmar, Colombia … these put huge pressure on an ongoing basis, decades of pressure on the humanitarian community, and money is in very short supply,” said Meehan, adding he planned to attend the Istanbul summit.

At St. Dimitri’s Orthodox Church in Istanbul, 17-year-old worshipper Jerious said he knew nothing about the upcoming U.N. gathering, set to take place not far off in just a few weeks.

He and his family were displaced due to sectarian conflict in Iraq soon after dictator Saddam Hussein fell there in 2003. They were finally registered as refugees and on a U.N. list for repatriation to a third country “soon,” said Jerious, who gave only his last name.

“I want to go to Australia … my brother is there,” he said.

NEXT: Pope might have to buy a drink for soldiers’ bishop