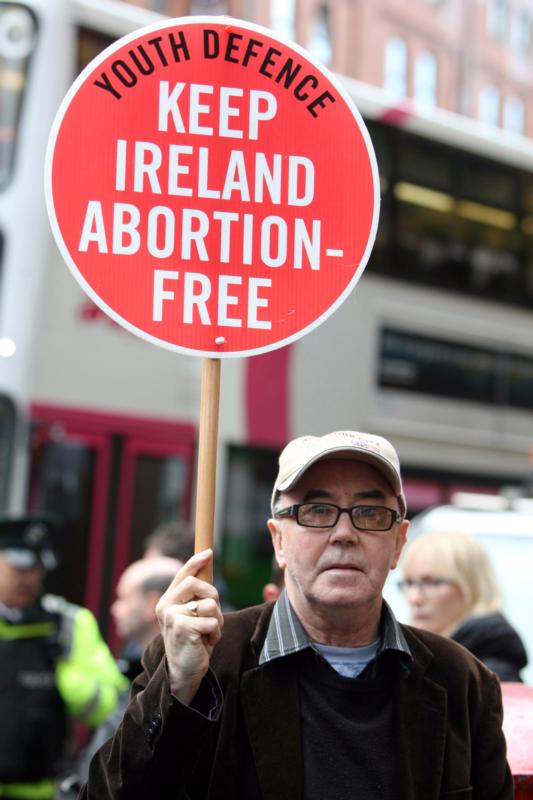 A pro-life supporter demonstrates in 2012 outside the Marie Stopes clinic in Belfast, Northern Ireland. The Catholic bishops of Northern Ireland have described as “profoundly disquieting” a ruling by the High Court that the region’s ban on abortion in all but very limited circumstances breaches human rights legislation. (CNS photo/Paul Mcerlane, EPA)

In a wide-ranging pastoral statement ahead of the polls, the bishops also urged Catholics to lobby lawmakers about issues as diverse as climate change and the right of church-run organizations to receive government funding.

Catholics at Masses April 30-May 1 were given pamphlets with a list of 10 questions that the faithful are encouraged to ask candidates, including their parties’ policies on abortion and child poverty.

“The next assembly term will see further pressures being brought to bear on politicians to introduce abortion to Northern Ireland,” the bishops said.

“The moral issue here is not whether what is proposed is abortion ‘on demand’ or some form of so-called ‘limited’ abortion. From a moral point of view, there is no such things as ‘limited’ abortion. Abortion is always the deliberate and intentional taking of an innocent, vulnerable human life, and a direct breach of the commandment ‘Thou shalt not kill,'” the bishops wrote.

“It is never morally acceptable to support any policy that undermines the sacred inviolability of the right to life of an innocent person in any circumstances,” the bishops added.

They also appealed for politicians to tackle child poverty after the votes have been counted.

“It is an indictment on the priorities and preoccupations of the last assembly that Northern Ireland was the only region in the U.K. where levels of childhood poverty actually increased, with over 101,000 children in Northern Ireland now living below the poverty line,” the bishops’ letter stated.

The bishops reminded Catholic voters of Pope Francis’ recent comment that there are “no grounds for considering homosexual unions to be in any way similar or even remotely analogous to God’s plan for marriage and family.”

They also called for a “new and more constructive political culture” and said a preoccupation with “tribal issues” and party point-scoring had alienated many people, particularly the young, from politics.

The letter also reaffirmed the importance of Catholic education and said the existence of government-funded faith schools is to be “celebrated and encouraged as part of a genuinely tolerant society that respects diversity and parental choice.”

On climate change, the bishops wrote: “We encourage the next assembly and executive to play their part in contributing to those U.N. Sustainable Development Goals for 2030 that are ethically consistent and to support the many local individuals and organizations that provide international outreach and outstanding development work in some of the most disadvantaged regions of the world.”

NEXT: Countries asking for help to handle millions of refugees