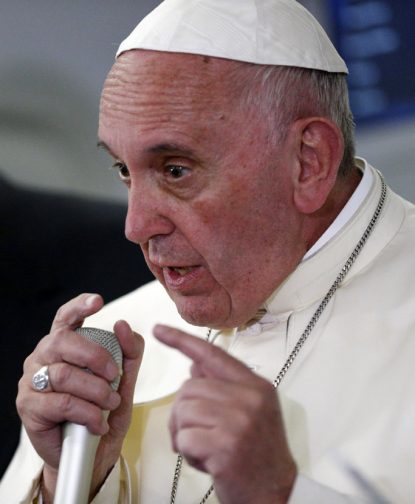 VATICAN CITY (CNS) — Governments work best when they are secular, not confessional, but they must give ample space for people to express their religious beliefs, including by respecting the right of conscientious objection, Pope Francis told the French Catholic newspaper La Croix.

While legislatures must “discuss, argue, explain (and) reason” about legal solutions to complex issues, including euthanasia and same-sex marriage, “once a law has been adopted, the state must also respect consciences,” the pope said in the interview published May 16. “The right to conscientious objection must be recognized within each legal structure because it is a human right — including for a government official, who is a human person.”

But a truly secular democracy fully respects the religious freedom of its citizens, including their right to publicly express their faith, the pope said. “Everyone must have the freedom to externalize his or her own faith. If a Muslim woman wishes to wear a veil, she must be able to do so. Similarly, if a Catholic wishes to wear a cross. People must be free to profess their faith at the heart of their own culture not merely at its margins.”

Pope Francis said he thinks that in some ways, France has exaggerated its secular character, particularly by “considering religions as sub-cultures rather than as fully-fledged cultures in their own right.”

Respect for religious belief in Europe must extend to Islam, as well, he said. “In this sense, when I hear talk of the Christian roots of Europe, I sometimes dread the tone, which can seem triumphalist or even vengeful. It then takes on colonialist overtones. John Paul II, however, spoke about it in a tranquil manner.

“Yes, Europe has Christian roots and it is Christianity’s responsibility to water those roots. But this must be done in a spirit of service as in the washing of the feet,” he said.

Interviewed by La Croix’s director and by its Vatican correspondent, Pope Francis agreed that nations have a right and obligation to control their borders and regulate immigration. But, he said, when immigrants are accepted “the worst form of welcome is to ‘ghettoize’ them. On the contrary, it’s necessary to integrate them.”

Those held responsible for the Brussels terrorist bombings in March, he said, “were Belgians, children of migrants, but they grew up in a ghetto,” while London has sworn in a new mayor, Sadiq Khan, who is the son of Pakistani Muslims. “This illustrates the need for Europe to rediscover its capacity to integrate,” the pope said.

Asked about a perceived fear of Muslims in Europe, Pope Francis responded, “I don’t think that there is a fear of Islam as such but of ISIS and its war of conquest, which is partly drawn from Islam. It is true that the idea of conquest is inherent in the soul of Islam. However, it is also possible to interpret the objective in Matthew’s Gospel, where Jesus sends his disciples to all nations, in terms of the same idea of conquest.”

The journalists also asked Pope Francis about a case of clerical sexual abuse that has “shattered” Catholics in the Archdiocese of Lyon where a priest, who ran a large Catholic school, has been charged with “sexual aggression and rape of minors” between 1986 and 1991.

“It is not easy to judge the facts decades later in a different context,” Pope Francis said, but “there can be no statute of limitations for the church in this field. … As Benedict XVI said, there must be zero tolerance.”

An association of the priest’s victims have filed a lawsuit against Lyon Cardinal Philippe Barbarin, accusing him of failing to act to stop the abusive priest. “Based on the information that I have, I believe that Cardinal Barbarin in Lyon took the necessary measures and that he has matters under control,” Pope Francis said.

The pope said he believed that Cardinal Barbarin resigning would be “a contradiction, imprudent” while the case is still under study because doing so “would amount to an admission of guilt.”

Asked about the Vatican’s ongoing discussions with the traditionalist Society of St. Pius X and his meeting April 1 with Bishop Bernard Fellay, the society’s superior general, the pope said, “They say they are Catholic. They love the church.”

“Bishop Fellay is a man with whom one can dialogue,” Pope Francis said. “That is not the case for other elements who are a little strange, such as Bishop (Richard) Williamson or others who have been radicalized. Leaving this aside, I believe, as I said in Argentina, that they are Catholics on the way to full communion.”

“Good dialogue and good work are taking place” to bring the society and its members back to a fully normal position within the church, the pope said. Establishing a “personal prelature,” a sort of non-territorial diocese, for them “would be a possible solution but beforehand it will be necessary to establish a fundamental agreement with them. The Second Vatican Council has its value. We will advance slowly and patiently.”

Members of the society have objected to some of the teaching of the Second Vatican Council and to mainstream interpretations of it, especially the council documents on religious liberty, ecumenism, liturgy and relations with other religions.

Pope Francis also told La Croix that the process of study, reflection and discussion surrounding the 2014 and 2015 meetings of the Synod of Bishops on the family had an impact on church leaders. “I think that we all came out of the various processes different from the way that we entered. Including me.”

In the postsynodal apostolic exhortation, “Amoris Laetitia,” the pope said, “I sought to respect the synod to the maximum. You won’t find canonical prescriptions there about what one may or may not do.”