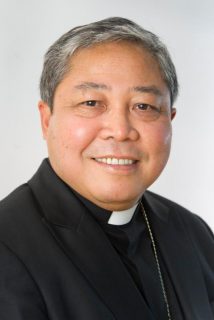 UNITED NATIONS (CNS) — Archbishop Bernardito Auza, the Vatican’s permanent observer to the United Nations, called for world leaders to take action with regard to “countering the narratives and ideologies of terrorism” during the Security Council’s open debate May 11.

The archbishop said in his statement that the debate is important because “it calls us to strike terrorism at its very roots and where it must primarily be fought: namely, in the hearts and minds of men and women, in particular of those who are most at risk of radicalization and recruitment by terrorist groups.”

He emphasized that the narratives and ideologies of terrorist groups, in addition to religion, are used to justify their acts of violence, and countering them is a responsibility of all religious leaders.

“Religious leaders and people of faith must be at the forefront in delegitimizing the manipulation of faith and distortion of sacred texts as a justification for violence,” the U.N. nuncio said. “Anyone who considers himself or herself a believer while planning and carrying out actions against fundamental rights and dignity of every man and woman must be condemned.”

In the fight against terrorism, Archbishop Auza said that all religions must come together to confront terrorist groups in their “misuse of religion … religious bigotry, stereotyping and disrespect for what people hold sacred.”

To counteract the narratives and ideologies of terrorism, religious leaders must be educated in both the “history and the meaning of the sacred texts” to be able to identify the false narratives of extremists, said the archbishop.

Many terrorist groups are targeting young people, who often come from poor immigrant families and are excluded from their communities. To address this, Archbishop Auza called governments to “engage with civil society to address the problems of communities,” to “achieve integration of those communities.”

Finally, the archbishop highlighted terrorist groups’ use of cyber recruitment. He mentioned that their “access to cyberspace must be denied” to cut off their reach to “the hearts and minds of millions of people.”

“The Holy See is convinced,” Archbishop Auza concluded, “that if we are to win the hearts of our children and young people and prevent their joining terrorists groups, we must build inclusive societies and prevent illicit arms, trafficking, build bridges rather than walls, and engage in dialogue rather than in mutual isolation.”

NEXT: To ignore the poor is to despise God, pope says