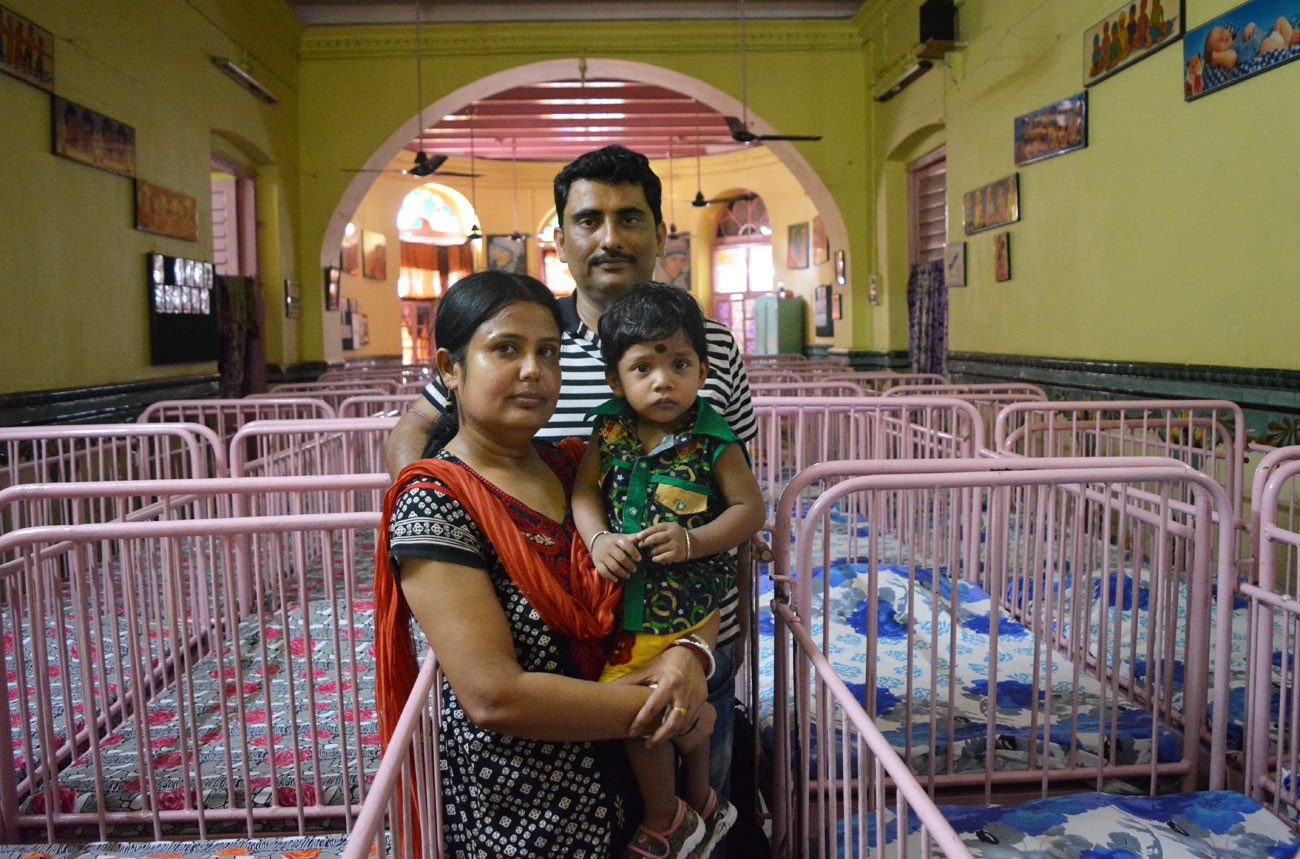 Anirban Mukherjee (center rear) and his wife, Sampa, pose May 2 with their 17-month-old son Anirban at Shishu Bhavan, the Missionaries of Charity children's home in Kolkata, India. The parents adopted Anirban from the home in April 2015 and call him "the gift from the saint of Kolkata, Mother Teresa." (CNS photo/Saadia Azim)

Anirban’s parents brought him to visit and play with his old housemates. He was adopted in April 2015 by Abhay and Sampa Mukherjee, a childless couple from Asansol, an industrial township in West Bengal. Anirban’s biological mother could not afford to pay for his postnatal treatment, so just a few weeks after his birth, she abandoned him.

Shishu Bhavan became his home, where he was treated for severe malnourishment until he was put up for adoption.

Abhay and Sampa Mukherjee were unable to conceive and called Anirban “the gift from the saint of Kolkata, Mother Teresa.”

“I am very keen on adopting a girl child now, so that our family could be complete. But within a few months after we adopted Anirban, this home has stopped their adoption services. We do not rely on other centers,” said Abhay Mukherjee. “It is good that while visiting here, Anirban gets to meet his friends, who are like family.”

Although the sisters continue to keep and care for abandoned, destitute and sick children, they have stopped putting children up for adoption. The nuns said they made the decision because new government rules were “contrary to our Christian values.”

The decision was made after the Indian government’s Union Ministry of Women and Child Development issued new guidelines allowing “single or unmarried parents, men or women, the right” to apply for and adopt children. The nuns concluded their pending adoptions, then on March 31 wrote to the ministry that they had closed their adoption centers.

The Central Adoption Resource Authority centralized the adoption process through an online application system, creating a database for prospective adoptive parents, which also makes it easier for single, divorced, gay couples or couples from abroad to adopt children in India in accordance with the new guidelines.

But many nongovernmental organizations have expressed concern that making it easier for adoption opens up a Pandora’s box in India, where child labor, human trafficking and pressure on unwed mothers to give up their children are serious challenges.

In the statement sent to the ministry, the nuns wrote: “If we were to continue the work set up by Mother Teresa, complying with all the provisions would have been difficult for us.”

Sister Joan of Arc told Catholic News Service: “We trust that God will take care of all the children in need of love from parents. We will continue to serve — wholeheartedly and free of charge — unwed mothers, children with malnutrition and differently abled children in all homes/centers run by us, irrespective of caste, creed and religion by God’s grace.”

Sister Ita explained: “We believe in God’s will, and there are certain values that need to be upheld. The idea to provide homes to children is to give them security and love. And if governmental guidelines in some way interfere with our principles, we have little option but to stop the services.” She said they could continue to ensure that children who are “malnourished, weak, sick and destitute and in need of compassion and love find (a) home here.”

“We believe in Mother’s words and as she professed that the goal is to get the children families, we would not want them to get in further difficulties in life,” said Sister Karita Mary.

Anne, 12, and Bess, 8, are from Kerala and came to visit Shishu Bhavan. One of them was adopted, but their parents will not tell them which one. The parents said they do not want to discriminate between the children.

“They know that one of them is from Mother’s Home but are growing as equals. It was Mother Teresa’s wish that I had decided to adopt a girl child much before I got married. Later I adopted the child, with support from my family,” said Christine, the mother of the two girls.

Volunteers from abroad and India work part time with the children and help them in their studies at the Missionaries of Charity centers. But with limited space now and children having little option of finding parents through the adoption process, it is difficult for the sisters to provide their services to newer special-needs children.

Another couple, Soma and Joydeep Mukherjee, also wanted to adopt a child.

“As parents we seek the most reliable center that can facilitate a smooth development of relationship between the parent and the child,” said Soma Mukherjee. “There are thousands of children wanting homes in India, and they should not be excluded from family life.”

Shishu Bhavan currently houses 35 differently abled children. They are fed, taught and given the medicines they need.

“We have volunteers to take care of these kids. They will live here and grow up,” said Sister Felomina. “The mission intends to make them independent. It is true that most of the times children are left out because of their disabilities by their biological parents. Now when we are serving them, we would do so for their entire life.”

PREVIOUS: To ignore the poor is to despise God, pope says