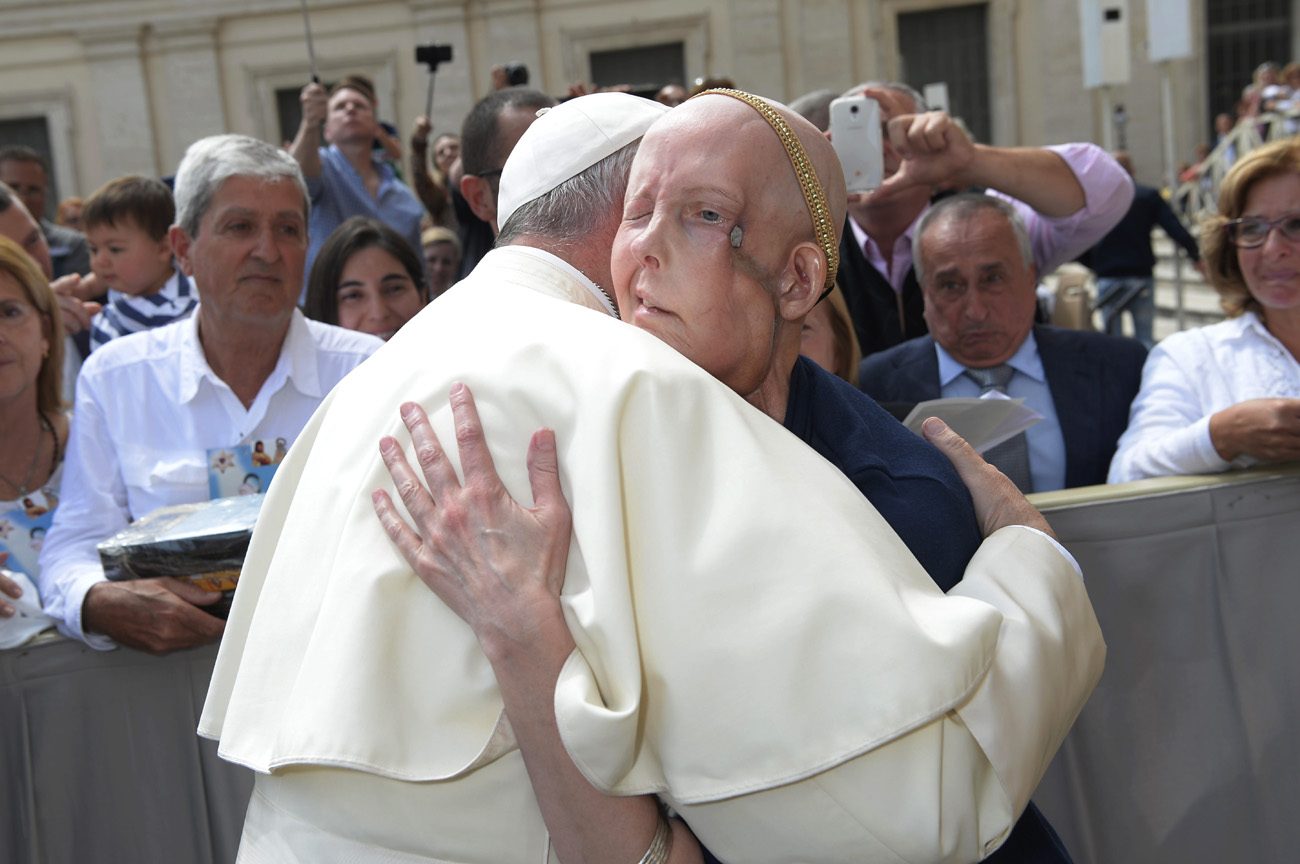 Pope Francis embraces Cheryl Tobin, who has stage IV cancer, during his general audience at the Vatican May 11. Tobin, from Clarksville, Tenn., was visiting Rome to fulfill a dream and to pray for a miracle. Doctors have given her three to nine months to live. (CNS photo/L'Osservatore Romano)

VATICAN CITY (CNS) — The military mantra of “suck it up” and an intense love for the Catholic faith drove Cheryl Tobin to reach new heights — the cupola of St. Peter’s Basilica and a personal blessing from Pope Francis.

Despite having stage 4 cancer, undergoing chemotherapy and missing a section from both thigh muscles, Tobin traveled to Rome, climbed corkscrew staircases and did “the big wave” balanced on top of a plastic chair in order to catch the pope’s attention.

“We were in the back of the crowd” at the pope’s weekly general audience May 11 in St. Peter’s Square, her husband, Jim Tobin, told Catholic News Service.

“I told her, ‘You need to stand up on the chair and suck it up.’ People were looking at me, like, ‘What a thing to say.’ And then I told her, ‘Don’t just wave. You’ve got to do the big wave.’ That’s when (the guards) pointed to her” to indicate she could come out from behind the barricades and meet the pope.

“Everyone around us cheered. They only let her go up” to the pope, Jim said.

Cheryl said the pope held her hands and then blessed her head — bald from chemotherapy and misshapen from repeated skin grafts and operations to remove a tumor at the base of her skull.

She said she didn’t want to wear her wig because she wanted the pope to see her like she was, but she did add some sparkle with a gold elastic hairband.

The pope then warmly embraced her as Cheryl cried on his shoulder. “I started crying when I saw him. I was overwhelmed with emotion,” she said.

“Suck it up” is also what got Cheryl up the 200 marble steps to reach the top of St. Peter’s dome, she said.

Like her husband, “I was in the army — a master sergeant,” airborne division, and “you just suck it up, and pull yourself up by your bootstraps” when facing any kind of hardship or challenge, she said.

An elevator took Cheryl and Jim most of the way up, but getting a bird’s-eye view of St. Peter’s Square required taking the stairs the rest of the way.

Extreme fatigue from treatments meant Cheryl used a wheelchair during most of the trip, but she steadied herself with her hands along the narrow spiral stairway, hoisting her way up, noticing many visitors around her complaining about the climb and getting discouraged.

“Then they saw her and got quiet,” Jim said.

Soon, Cheryl said, “we were like a group, pushing each other on” and cheering, “We’re almost there.”

“My legs were like rubber,” she said, explaining that sections of her quadriceps had been removed to add muscle tissue to her face.

Cheryl’s pilgrimage began in 2015 when her name was picked from a random drawing of listeners of Lino Rulli’s “Catholic Guy” show on Sirius XM’s Catholic Channel. Only a few spots are available each year to join Rulli and other listeners on a pilgrimage to Rome and other cities in Italy.

But surgery and aggressive cancer treatments forced her to cancel that trip with an agreement to have a guaranteed spot on this year’s trip, she said. Radiation therapy again interfered with those plans, but Rulli organized a personalized itinerary that Cheryl could take on her own with her husband when she was between chemotherapy sessions this spring.

With her daughter’s urging, Cheryl had started a GoFundMe page to pay for the costs of the trip — reaching the bulk of her goal in 15 months. She also curates the “Cheryl Tobin’s Fight Against Cancer” page on Facebook as a multimedia journal chronicling her medical and faith journey.

“I’m not ashamed to show people what I’m going through,” she said, adding that people tell her that her posts are inspiring.

Cheryl said the Catholic Channel’s satellite radio programs were instrumental to her joining the Catholic Church, because she had “always believed in God,” but her parents didn’t take her to church when she was growing up.

“I was always looking for something but never found it,” she said.

Living near Nashville in Clarksville, Tennessee, Cheryl said there were many Protestant and Evangelical Christian communities in that part of the “Bible belt,” but “every church believed in something different. If you don’t agree, you start your own church. So it never felt right.”

She said she started reading about the Catholic Church and “liked the structure,” the “set laws” in church teaching, and the fact that the order of Mass is the same wherever you go so you always feel at home. “Mass is heaven on earth,” she said.

Rulli’s show had a particular impact on her, she said.

“I never felt good enough, not worthy enough, not perfect enough” to be welcomed by God, she said, “and that held me back.”

But Rulli and his guests “were normal” with their humorous banter about life and frank talk about their struggles. Their being upfront about being imperfect helped Cheryl feel there was a place for her, too, in the Catholic Church, she said.

After she became a Catholic in 2010, it “seemed to be a load off her chest,” Jim said. It also marked the start of her dream to go to Rome someday.

When she was diagnosed with a rare form of cancer in 2013 at the age of 45, she tapped into her faith to pull her through and the Christian faith of her friends and co-workers in receiving prayers and blessings.

With her poor prognosis — from three to nine months to live — all of her doctors said, “‘Do what you enjoy.’ So we decided to come here” and “pray for a miracle,” Jim said.

Reliving her papal embrace from that morning, Cheryl said, “I’m relieved. I feel like no matter what happens. I’ll be OK. It’s like not having any fear. It’s closure in a way.”