Chairman, witnesses at hearing look at threats to religious freedom 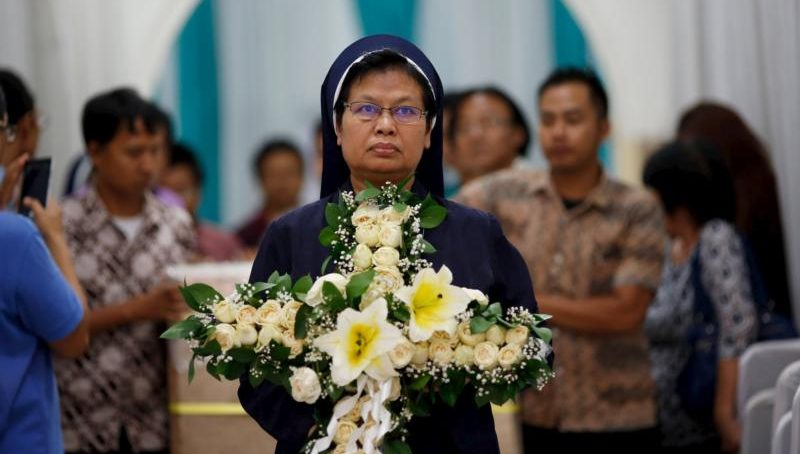 A religious sister carries a cross made of flowers during a funeral in Jakarta, Indonesia, May 1, 2015. (CNS photo/Nyimas Laula, Reuters)

“(Religious liberty) is the right to believe, or not to believe, and to practice one’s religion according to the dictates of one’s own conscience,” said Smith, who convened a hearing on Capitol Hill on global threats to religious freedom.

Smith, a member of the House Committee on Foreign Affairs, is chairman of its Subcommittee on Africa, Global Health, Global Human Rights and International Organizations.

He was joined by panel of witnesses: David N. Saperstein, the State Department’s ambassador-at-large for international religious freedom; Robert P. George, McCormick professor of jurisprudence at Princeton University; and M. Zuhdi Jasser, president of the American Islamic Forum for Democracy.

Smith emphasized that religious liberty is not only an “American value,” but a “universal principle.”

“The right to religious freedom flows from the dignity of every human person and, as such, deserves to be protected everywhere and for everyone,” said Smith.

Despite the universal right to religious liberty, Smith said that it is not a right that is offered to all people.

“The world is experiencing a crisis of religious freedom that poses a direct challenge to U.S. interests in the Middle East, Central and East Asia, Russia, China and sub-Saharan Africa,” said Smith.

He mentioned how countries around the world are “facing systematic violence and discrimination” by both the government and “non-state actors” such as Islamic State militants in the Middle East and Boko Haram in Africa.

“These non-state actors have created global instability through their murderous religious intolerance,” said Smith. “If the U.S. does not have a comprehensive strategy to deal with these groups — genocide, killings, beheadings and sexual violence targeting religious minorities will happen again and again.”

Smith proposed the idea that religious liberty is not only a “human rights concern,” but “a key component of our national security.”

Recently, Smith introduced the Frank Wolf International Religious Freedom Act, H.R. 1150, along with Rep. Anna Eshoo, D-California. Wolf, for whom the bill was named, was the primary author of the original international freedom measure and a “tireless champion of the poor and persecuted,” said Smith.

“Religious freedom can act to undermine the religion-related violence perpetuated by non-state actors,” said Smith. “The tolerance and open dialogue embodied in religious freedom is the best antidote to extremism.”

Smith said diplomacy, paired with military and economic efforts, “can help undermine the conditions that nurture groups like ISIL, Boko Haram, extremist Hinduism, or radical Buddhism.” (ISIL is another acronym for Islamic State.)

“In a world where some people are willing to kill and die for their faith and where anti-Semitism persists even in the most tolerant of places, it is more important than ever for the U.S. to engage in a robust religious freedom diplomacy,” said Smith.

He concluded by stating that implementation of H.R. 1150 “will send a clear and urgent message regarding the inherent dignity of every human being, as well as our common global security in the fight against religious persecution, extremism and terrorism.”

A priority of H.R. 1150, which the House passed in mid-May, is that it “recognizes the connection between the advancing of religious freedom globally and U.S national security and economic interests.” This helps in stabilizing a growing democracy while sustaining economic freedom and adds more importance to the equality of women.

“This policy is a priority to demonstrate to the victims of religious persecution that they are not forgotten,” said Smith. “As it says in the Bible, a hope deferred makes the heart sick. If people think that no one has their back, people do lose heart.”

Saperstein in his testimony assured the subcommittee that in July, 30 governments will meet in Washington to advance “intergovernmental dialogue on ways to protect religious minorities in Iraq and Syria.” In this meeting, they plan to identify gaps in programming, discuss next steps and strengthen the assistance and collaboration that they have with Iraq and Syria, specifically helping those of religious and ethnic minorities.

Rep. Mark Meadows. R-North Carolina, a member of the House subcommittee, told Saperstein in regard to the importance of his job, “I’d raise holy hell behind the scenes to make sure that we are doing what is right.” Saperstein responded, “I guess if any office should raise holy hell it should be the religious freedom office.”

Saperstein said on his trips to nearly 20 countries as ambassador, “what has stood out is the incredible irrepressible spirit of all the individuals who risk discrimination, imprisonment, and even death for simply seeking to live out their lives in accordance with their consciences.”

Contributing to this story was Ana Franco-Guzman.

NEXT: ‘God is here to grieve with us,’ says priest aiding grieving families