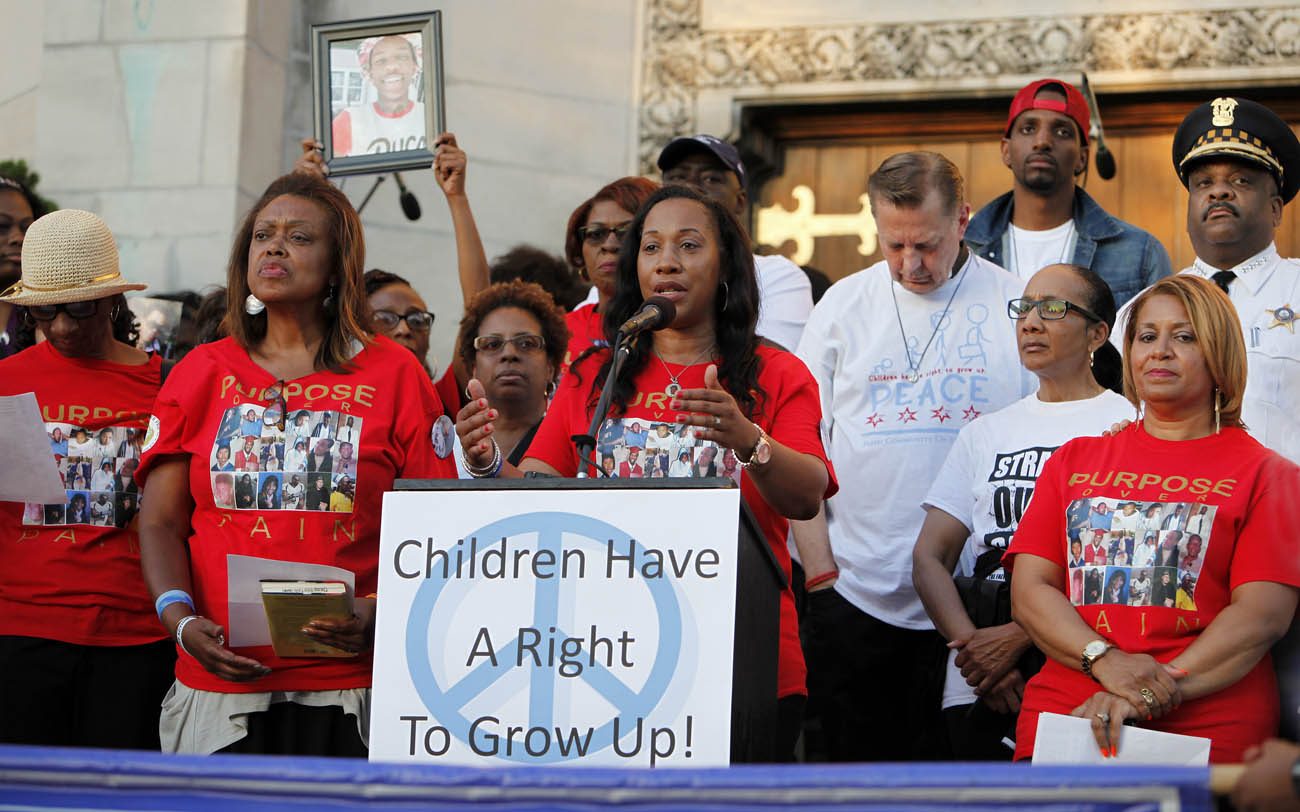 Pam Bosley, co-founder of Purpose Over Pain, speaks to participants during a June 17 rally and march in front of St. Sabina Church in Chicago to kick off the beginning of summer and call for an end to violence in their community. Purpose Over Pain is a group of mothers formed in 2007 by several Chicago-area parents who lost their children to gun violence. (CNS photo/Karen Callaway, Catholic New World)

St. Sabina’s pastor, Father Michael Pfleger, led the annual event in the city’s Auburn-Gresham community, which included local elected officials and Chicago Police Superintendent Eddie Johnson, who used to be a commander in that district. The event kicked off the parish’s Friday evening marches for peace, which will take place every Friday of the summer.

That weekend 43 people were injured and 13 killed by gun violence in the city. According to the Chicago Tribune, as of June 21, 1,792 people were shot in Chicago in 2016 and there were 307 homicides. One of those killed was Salvador Suarez, who was shot around 1:30 p.m. outside Holy Cross Church while Mass was being celebrated.

“This terrible violence is destroying not only those killed and wounded, but all of us. If we want to survive as a community that treasures life, liberty and the pursuit of happiness, we must act now to put an end to this carnage. No doubt there are many causes, but we can start by getting these combat weapons off our streets,” he wrote. “Not to act only gives in to the despairing falsehood that there is nothing we can do, which means that violence wins. This is a responsibility that belongs to all of us as citizens, especially to our elected officials. Let them hear our voices. Let us demand action today. Doing nothing is no longer an option.” 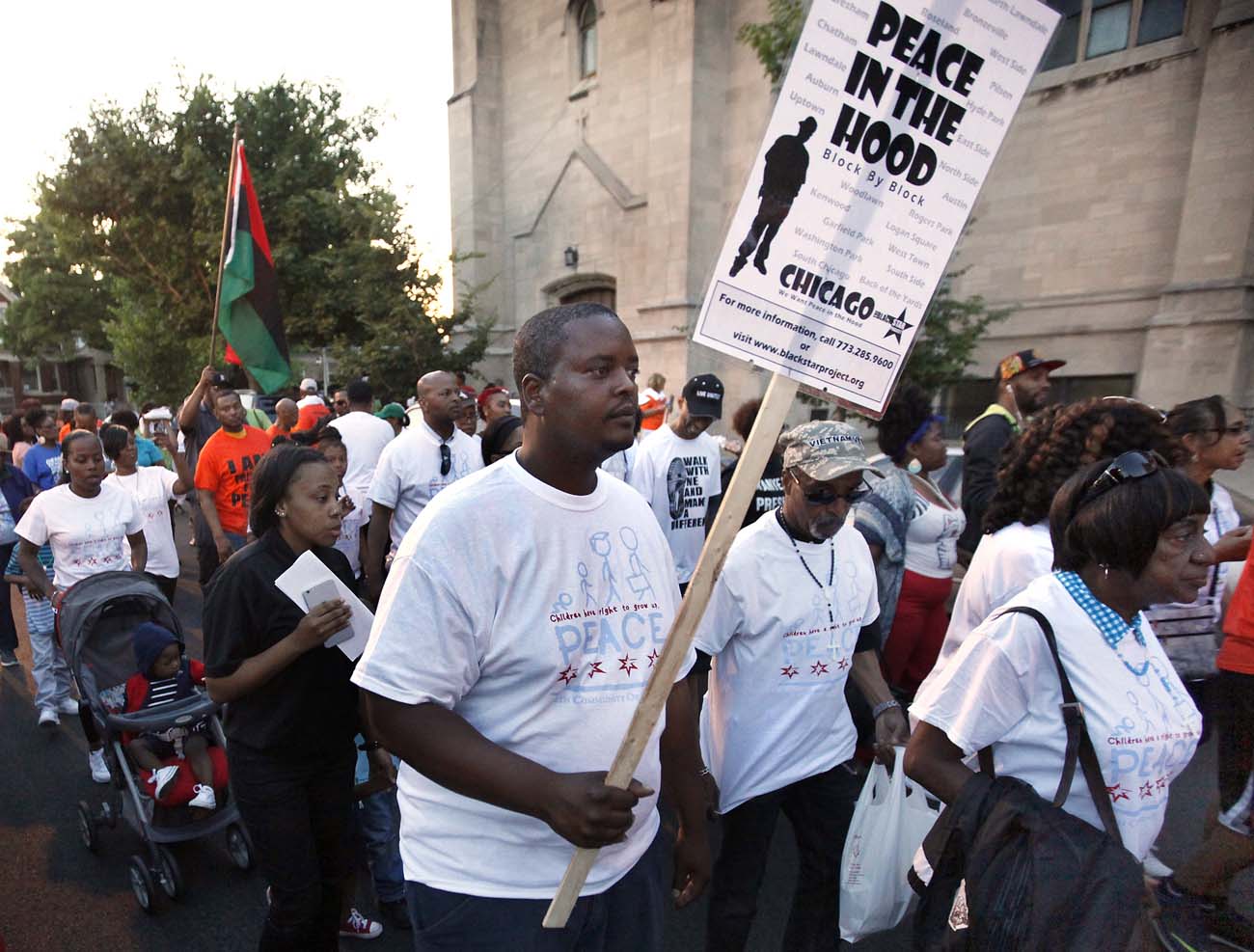 Participants walk during a march to kick-off the beginning of summer and call for an end to violence in their community June 17 in Chicago. The march followed a rally held in front of St. Sabina Church. (CNS photo/Karen Callaway, Catholic New World)

During the June 17 rally, Father Pfleger called on adults to stand up and take control of their blocks.

“Our children deserve to have a safe summer,” the priest told the crowd. “Our children should not be afraid to go to the park, sit on their porch or play with their friends on their block. The laughter and voices of children should be louder than shots fired or sirens blaring in our streets.”

While many ask what another march or rally will do to help curb the violence, Father Pfleger said if it raises the consciousness of those attending and convinces them to stop being afraid or passive, and if it gives hope to the people who they pass along the street then it will be a success.

Ending the violence requires a comprehensive approach that includes strengthening families, providing good schools, economic development and rebuilding the bridge between the people and the police, he said.

“And it’s going to demand us deciding that using a gun is not the way we settle our arguments. Guns are for cowards,” Father Pfleger preached to the crowd.

St. Sabina parishioner Renee Taylor came to the march to show the children they are supported.

“It’s so important to save our children,” she said “We need to put down the guns and just love each other.”

Marching in the community helps people view each other as human beings, she said.

“We’re losing our loved ones. We need the people doing the killing to see them as people that you just can’t shoot them and throw them away. Somebody loves them.”

On June 13, Mayor Rahm Emanuel a new program focused on the opportunity crisis facing men of color on the South and West sides of Chicago. The city’s initiative will partner with St. Sabina Parish and provide 50 of “the most severely disconnected youth and young adults between the ages of 16 and 28 with full-time employment, as well as access to support and services to maintain employment,” a statement said.

As this year’s school year wrapped up, Catholic schools all over Cook and Lake counties participated in simultaneous services May 26 to pray for a peaceful summer without gun violence.

Throughout the summer, in an effort to unite communities in peace, the 229 Catholics school in the archdiocese will display banners that say, “We Are Praying for a Peaceful Summer. Join Us.” Banners also will be hung at the archdiocese’s Quigley Pastoral Center.

Students in all Catholic schools also were invited to color paper doves and write on them their hopes for peace during the summer months. The doves were displayed in schools.

The need for peace in the streets is especially felt at the Academy of St. Benedict the African in the city’s Englewood neighborhood.

Principal Patricia Murphy said she often has to call the police because of dangerous activity going on outside of the school. Just the day before the prayer service there was a shooting right outside her window in the early afternoon, she said.

The students live in fear of the violence, she said. “They do not get to go outside and play wherever they live.”

“I have a baby sitter and we like playing outside but my mom barely lets us out now that there’s so much violence,” she told the Catholic New World, Chicago’s archdiocesan newspaper.

NEXT: HHS says California can require that all health plans cover elective abortions