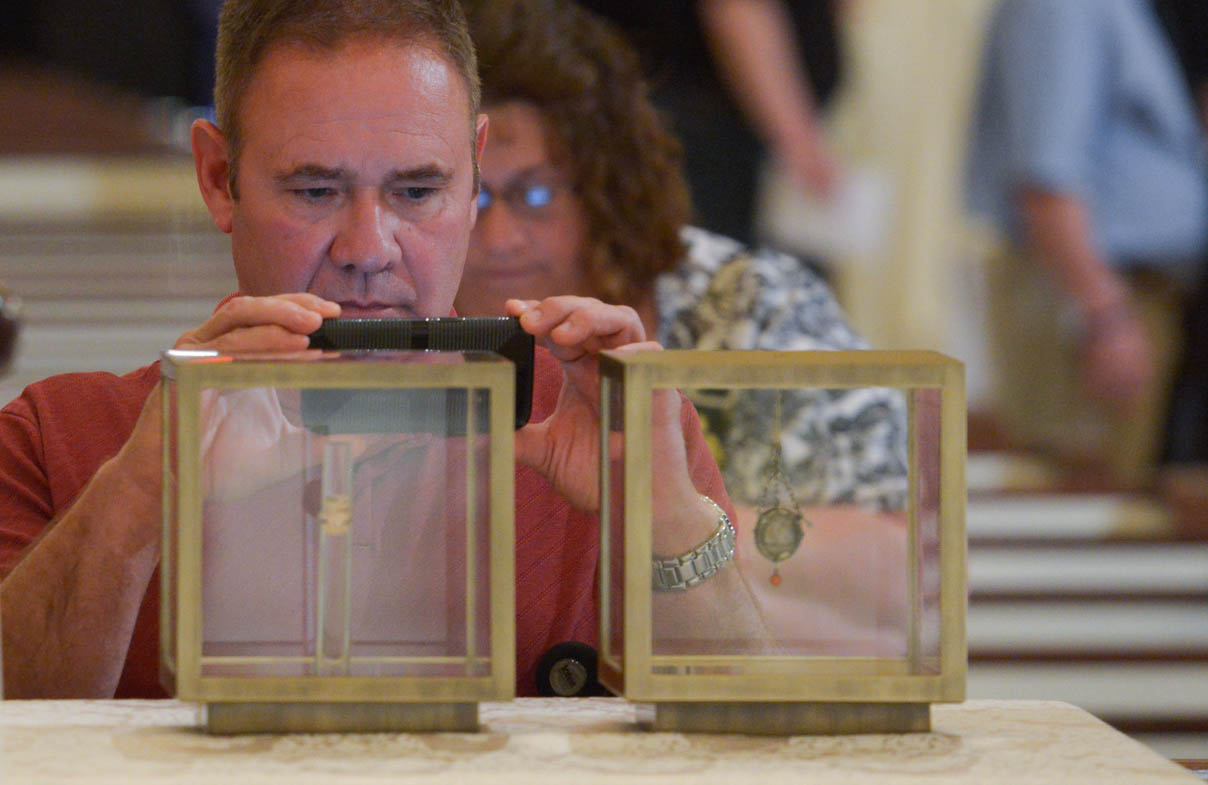 Jim Landers takes a photo of relics of Sts. Thomas More and John Fisher at the Fortnight for Freedom opening Mass June 21 at the Basilica of the National Shrine of the Assumption of the Blessed Virgin Mary in Baltimore. Landers' great-great-grandfather, Daniel Lawson Moore, was a relative of St. Thomas More. (CNS photo/Kevin J. Parks, Catholic Review)

BALTIMORE (CNS) — Baltimore Archbishop William E. Lori linked urgent matters of “immigration, marriage and the church’s teaching on sexuality” to a pair of 16th-century martyrs during a June 21 Mass at the Basilica of the National Shrine of the Assumption of the Blessed Virgin Mary in Baltimore that began the fifth annual Fortnight for Freedom.

The theme of this year’s fortnight is “Witnesses to Freedom.” It features relics of St. Thomas More and St. John Fisher, an English layman and bishop, respectively, who were martyred in a 16-day span in 1535, when they refused to accept Parliament’s Act of Supremacy, which had declared that King Henry VIII was head of the church in England.

On display for veneration were St. John Fisher’s ring and a piece of bone of St. Thomas More. According to Jan Graffius, curator of Stonyhurst College in England, which holds the relics, it came from St. Thomas More’s skull, which was rescued by his daughter, Margaret, from a spike on London Bridge.

During a Mass that was televised nationally by the Eternal Word Television Network, Archbishop Lori’s homily connected Sts. Thomas More and John Fisher to an array of 21st century struggles, among them the Health and Human Services contraceptive mandate that the Little Sisters of the Poor continue to challenge in the nation’s highest courts.

“This night we recognize gratefully the courage of all who are resisting the mandate, especially the Little Sisters of the Poor,” the archbishop said. “They are vigorously defending their freedom and ours –- and they are doing so with a beauty and a joy, borne from the heart of the Gospel.”

Archbishop Lori, who is chairman of the Ad Hoc Committee on Religious Liberty of the U.S. Conference of Catholic Bishops, which sponsors the Fortnight for Freedom, also asked for prayers for the victims of June 12 mass shooting in Orlando, Florida, and their families.

He talked at length of the modern struggle to worship freely.

“We may think that the days of the martyrs have ended,” Archbishop Lori said in his homily, “but as Pope Francis points out, there are more martyrs for the faith in our times than there were during the first centuries of the church.

“We remember with reverence and love those who died for their faith — Jews, Catholics and Protestants -– an ecumenism of blood, as Pope Francis says — during the reign of terror that was Nazism and Communism.

“This night,” he continued, “we draw close to the martyrs of the 21st century in Iraq, Iran, Syria and parts of Africa — those slain for their faith — in plain sight of us all with no one to hold their persecutors accountable. Refugees are streaming from the Middle East just as Jews tried to escape from the horrors of Nazism –- only to find that they are held suspect and they are unwanted.”

While religious liberty in the U.S. might not seem in such dire straits by comparison, vigilance is required nonetheless.

“We would like to think,” Archbishop Lori continued, “‘such things could never happen here.’ … Yet, there are ominous signs that protections for religious freedom have waned as bad laws, court decisions and policies pile up and as the prevailing culture more readily turns away from religious faith.

“We may not be called upon to shed our blood,” he continued, “but we are called upon to defend our freedoms, not merely in the abstract, but as embedded in matters such as immigration, marriage and the church’s teaching on sexuality.”

Other Catholic organizations represented included the Knights of Columbus, the Equestrian Order of the Holy Sepulchre of Jerusalem and the Order of Malta. The second reading was given by Dr. Marie-Alberte Boursiquot, president-elect of the Catholic Medical Association and a basilica parishioner.

June 22 is the feast day for both Sts. John Fisher and Thomas More.

The linking of current threats to religious freedom with the relics of the two saints carried particular resonance for one worshipper.

Jim Landers, a parishioner of St. Ignatius, Hickory, was keenly interested in the St. Thomas More relic. He is originally from Louisville, Kentucky, where his great-great-grandfather, Thomas Lawson Moore, was a U.S. senator whose lineage included Thomas More.

The spelling of the name was altered when his ancestors came to the U.S.

“This Mass, and everything it stands for, is extremely important to me,” Landers told the Catholic Review, Baltimore’s archdiocesan publication. “Beyond that, there’s the family connection. I can’t even describe that. It’s extremely exciting.”

His sentiments are compounded by the fact that Landers was raised Baptist and became a Catholic after attending Mass for years with his wife, Michelle.

NEXT: Chicago parishes, schools pray for summer of peace, end of gun violence