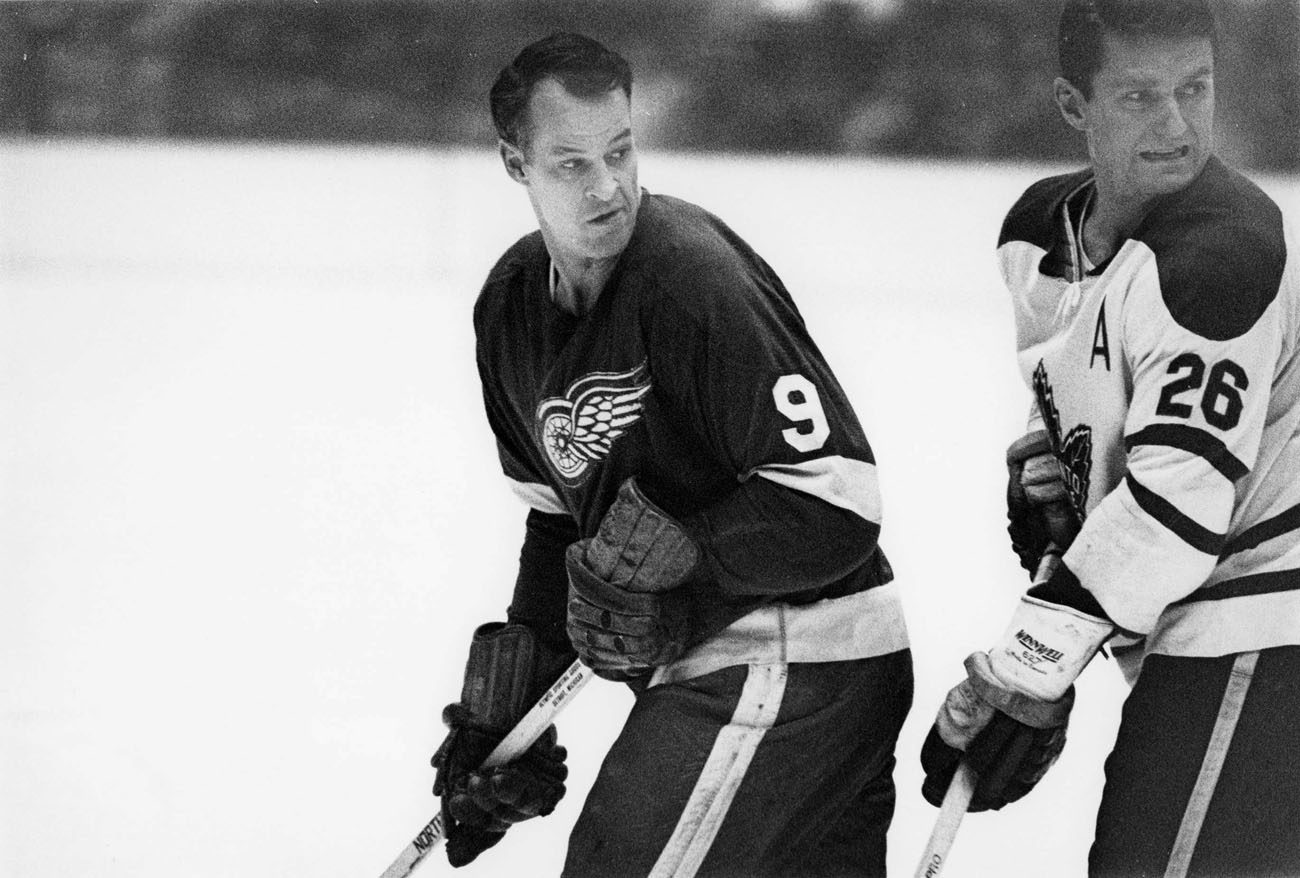 Detroit Red Wings' Gordie Howe is pictured in action against the Toronto Maple Leafs' Allan Stanley in this undated handout photo. Howe, the man forever known as "Mr. Hockey," died June 10 at age 88. A memorial Mass for the hockey legend was to be celebrated June 15 at the Cathedral of the Most Blessed Sacrament in Detroit. (CNS photo/Detroit Red Wings handout via Reuters)

That’s what Father J.J. Mech will take away from his experiences meeting Gordie Howe, the Detroit Red Wings and professional hockey legend who died June 10 at age 88.

“I think that’s probably what he was the most proud of, to be honest,” said Father Mech, rector of the Cathedral of the Most Blessed Sacrament and a longtime friend of the Howe family. “Even though he was Mr. Hockey, I think they were his real gift, his family. And I think he recognized it. I find that to be a testimony to who he is.”

Father Mech was to celebrate a morning memorial Mass for Howe June 15 at the cathedral, with thousands expected to attend.

Though Howe was not Catholic, several of his family members are, Father Mech said, and requested the Mass at Detroit’s cathedral to honor their father’s legacy as an icon of the Motor City.

The Mass will not be a funeral Mass in the Catholic liturgical sense, but Howe’s body will be present in a closed casket. Eulogies honoring the late Hall of Famer will precede the liturgy, which will follow the order of a weekday Mass.

For all Howe meant to Detroit and to professional hockey, it was his down-to-earth nature that touched almost everyone who met him, friends and fans alike, Father Mech told The Michigan Catholic, newspaper of the Detroit Archdiocese.

“He was the epitome of humility,” said the priest, who last fall celebrated the wedding of one of Howe’s granddaughters. “With all the challenges he’s had in his older years, he really connected and came alive with little kids. And his family attested to this, too. He loved to work with kids and to be the right kind of person for these young people.”

Despite his celebrity as one of the greatest athletes of all time, Howe always made time for the average fan, signing autographs and chatting with hockey moms and dads at rinks and in supermarkets across the Detroit metro area.

“He was such a great person in the way he dealt with fans,” Father Mech said. “They were not a burden; in fact, it was the exact opposite. He came alive when he was working with fans. The family was laughing about that. They might have needed to go somewhere and they’d say, ‘Well, forget about the schedule; Dad’s with the fans.’ He loved that, and that’s why I think he was such a class act. The ego was not a part of it.”

Father Mech said he met with Howe’s family the morning of June 13 to prepare details for the memorial Mass.

Though cathedral staff had no way of predicting how many people from the Detroit area would turn out to pay tribute to Howe June 15 — the Mass was going to be open to the public — the cathedral seats only about 900 people. About 500 family members and dignitaries — including Michigan Gov. Rick Snyder, Detroit Mayor Mike Duggan, members of the team-owning Ilitch family and Red Wings past and present, not to mention other NHL greats such as Wayne Gretzky and Bobby Orr — were expected to attend.

In anticipation of the overflow crowds, a sound system was being set up outside the church.

“We have a ton of security all around for lots of different reasons, so it will be a safe venue for everybody,” Father Mech said.

Howe, who scored 801 career goals — second only to Gretzky in that department — is about as close to Detroit royalty as anyone, Father Mech noted.

“No doubt, we are truly Hockeytown. That’s our name, and you can’t think about that without thinking about Gordie Howe,” he said. “With such a class act that he has been, we are proud to have him — even though he’s Canadian — as our second son.”

A daylong public visitation for Howe was taking place at Joe Louis Arena, home of the Red Wings, where Howe will lie in repose.

“Mark (Howe) had emphasized and some of the other brothers were laughing and said, ‘I hope people show up,’ because they do want folks to come,” Father Mech said, tongue-in-cheek.

“Hopefully it will be crowded just for the honor of what this man meant. He’s Mr. Hockey.”

PREVIOUS: At vigil for Orlando shooting, bishop prays for healing, conversion of terrorists

NEXT: House chaplain leads vigil at Capitol for victims of Orlando shooting