At vigil for Orlando shooting, bishop prays for healing, conversion of terrorists 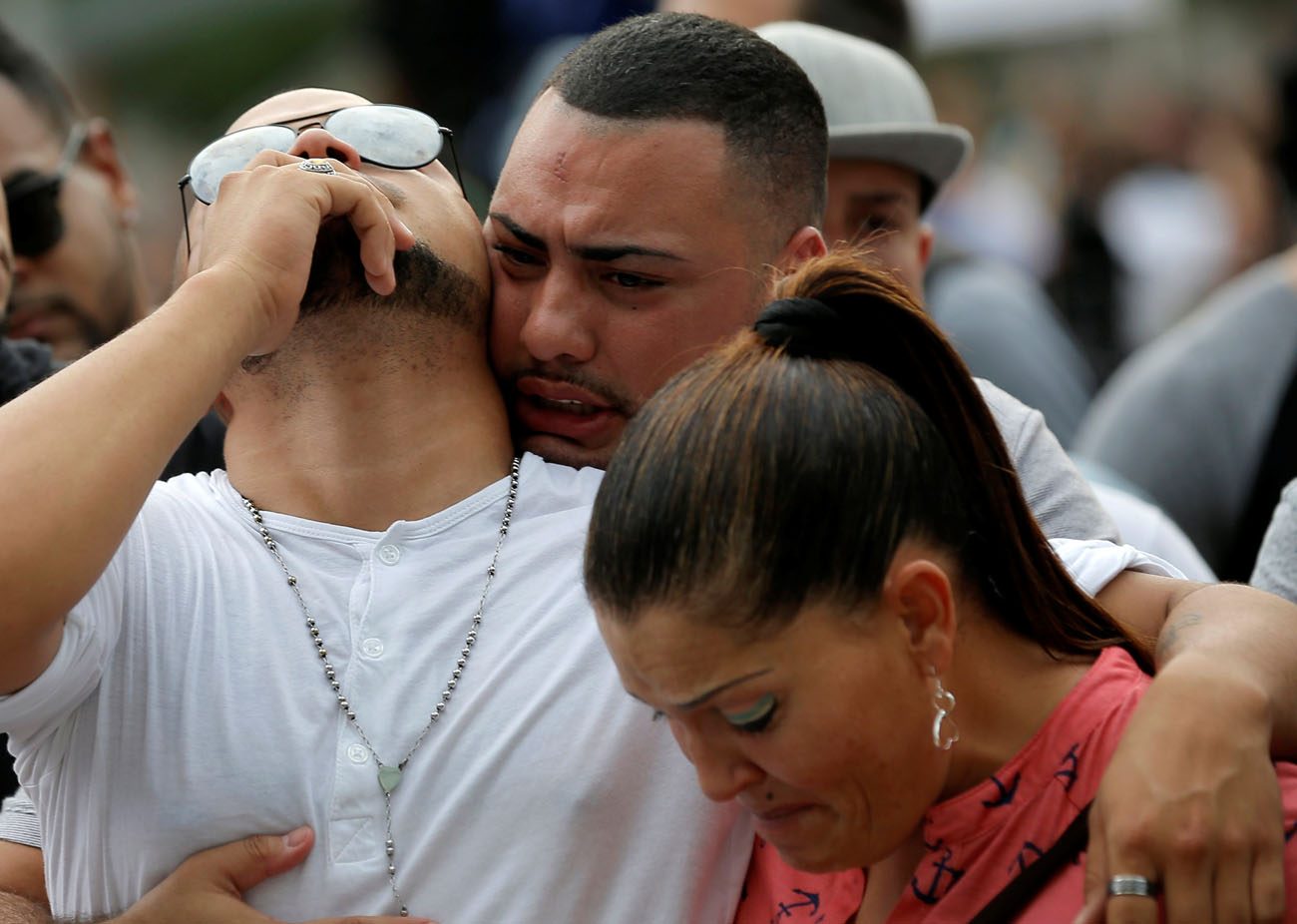 Mourners grieve at a June 13 vigil for the victims of the mass shooting at the Pulse gay nightclub in Orlando, Fla. A lone gunman, pledging allegiance to the Islamic State terrorist group, killed 49 people early June 12 at the nightclub. (CNS photo/Jim Young, Reuters)

ORLANDO, Fla. (CNS) — In Orlando and major cities around the nation and the world, people gathered June 13 to pay tribute to those killed and injured in the shooting rampage in Orlando the previous day.

About 700 people also gathered to pray for those attacked and for peace in the world at St. James Cathedral, less than two miles up the street from where the shootings took place at Pulse, a gay nightclub in Orlando.

The interfaith prayer service was led by Orlando Bishop John G. Noonan, who was joined on the altar by Bishop Robert N. Lynch of St. Petersburg, 10 priests of the Orlando Diocese and other religious leaders.

“Our presence here tonight is a symbol of hope. We come to pray,” said Bishop Noonan.

“We come not as different religions but one in the Lord,” said Bishop Noonan, who noted that he was familiar with violence in his home country of Ireland and stressed that people will only find peace when they recognize the dignity of all people as children of God.

The half-hour service — with readings about love and peace and songs echoing that message — was a somber one. The prayers were focused on peace, how God alone is lasting source of peace and rest. Someone read a reflection on peace by Blessed Oscar Romero, the Salvadoran archbishop martyred while celebrating Mass.

Those wishing to light a candle in the sanctuary were invited to come forward and the glimmering light filled the church. The congregation exited quietly after singing “Let There Be Peace on Earth.”

When he invited the local community to attend the service, Bishop Noonan said he hoped it would provide an opportunity for all to join one another in prayer that would “bring about an outpouring of the mercy of God within the heart of our community.”

He urged people to pray “for healing from this vicious assault on human life,” for comfort for those suffering loss and “a sincere conversion of heart for all who perpetrate acts of terror in our world.”

Natalia Gil, a 22-year-old parishioner of St. Isaac Jogues in Orlando, attended the prayer service with 10 others from her parish. “We’re all one big family. We’re here in the name of Jesus,” she told the Florida Catholic, newspaper of the Diocese of Orlando.

“We are gathered here because maybe not all of us have someone in common that we know, but we are all one community no matter the religion, what they believed in or who they were,” she added. Some in her group knew the victims either by face or by name. One young woman in the group held back tears and was unable to speak as she mourned for a cousin who was at Pulse nightclub that night.

Gil said she spoke for the group when she said faith is the source of their strength.

Imam Rashid, who was invited to participate in the prayer service by his friend Father John Giel, pastor of Holy Family Parish in Orlando, has lived in Orlando for 22 years and has three children in the schools in the city.

“I consider this my city and the city of my children. I feel the same sentiments. This is the time when the local community from different religions should come together and show terrorists that no matter how much evil they do, they cannot break our unity or break our strength,” he said.

Maria Torres, an accredited representative for Comprehensive Refugee Services at Catholic Charities of Central Florida, attended the prayer service to help translate for Spanish speakers and offer support and consolation to victim’s families.

Torres, who volunteered at the agency’s headquarters where family members were told to wait to hear notifications if loved ones had survived, said it was a blessing to be at the cathedral.

“We can pray anywhere, but it is a special blessing to be here at this vigil, to join with other members of our community in prayer for the victims and their families,” she said.

St. Stephen Parish in Winter Springs also held a prayer vigil June 13. Nearly 500 people from all walks of life participated seeking to receive comfort and to offer comfort to others through prayer.

The vigil included an opening prayer, music, prayer from St. Francis, Scripture readings, a homily by Father George Dunne, associate pastor, as well as time for reflection and adoration and a closing prayer.

“There was a sense among our parishioners that we needed to gather around the Eucharist in prayer for the victims and their families,” said Father George Dunne, a member of the Congregation of the Blessed Sacrament.

“It was a very powerful to witness the sense of community support and mercy toward one another,” Father John Bluett, pastor, told the Florida Catholic.

In the Diocese of Beaumont, Texas, Bishop Curtis J. Guillory celebrated Mass at St. Anthony Cathedral Basilica for those affected by the mass shooting, which left 50 dead (including the gunman) and more than 50 wounded.

Police said a lone gunman identified as 29-year-old Omar Mir Seddique Mateen — opened fire inside the Pulse club in Orlando in the early morning hours of June 12. News reports said that Mateen, who pledged allegiance to the Islamic State terrorist group, died in a gun battle with SWAT team members.

In his homily, Bishop Guillory said it is OK to be angry about what happened, as he was, but that anger shouldn’t take over. “We cannot allow our anger to be the GPS that moves us. Rather, it ought to be our faith,” he said.

“Think about it, we did not blame all of the Germans for Hitler nor did we blame all Anglos because of what happened in Charleston,” he said, referring to the white shooter who killed nine people at a historically black church in South Carolina.

“This is where we cannot be guided by our anger,” Bishop Guillory added.

Young and Peterson write for the Florida Catholic, newspaper of the Diocese of Orlando. Contributing to this report was Carol Zimmermann in Washington.

PREVIOUS: Prelate hopes Republican plan will be start of new conversation on poverty