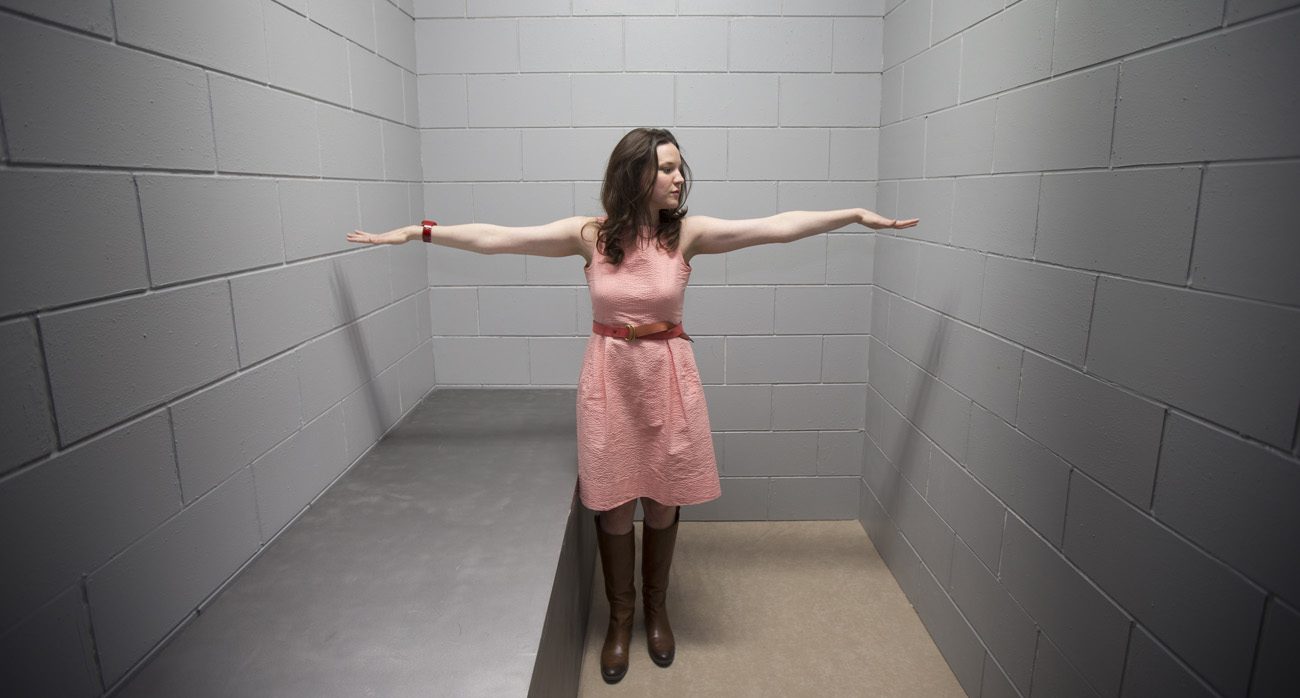 The Rev. Laura Markle Downton, director of the U.S. Prisons Policy and Program at the National Religious Campaign Against Torture, is pictured in a replica solitary confinement cell during the Ecumenical Advocacy Days event in 2015. (CNS photo/Erin Schaff, courtesy Perisphere Media)

WASHINGTON (CNS) — The “SHU” is not much larger than a good-size bathroom.

The SHU, or special housing unit, was where Johnny Perez spent a total of three years — the longest period being 10 months — in solitary confinement during the 13 years he was in New York prisons for armed robbery.

The tiny cells where inmates are sent for breaking prison rules or misbehavior are also known by nicknames such as the box, the bing, punk city, the hole, the pound and lockdown.

Perez was sent to solitary for fighting, testing positive for marijuana and having a frying pan in his cell.

In solitary he was alone with his thoughts 23 hours a day, with an hour outdoors in a small caged area for exercise. Corrections officers who brought meals and conducted security checks offered his only human contact.

“If they’re not sociable then you won’t be having a conversation with them,” Perez said of the guards. “One didn’t even look me in the face. It’s hard that the only person you come in contact with doesn’t validate you as a human being.

Perez, 37, made it through isolation with no debilitating psychological effects, unlike some others. He received “tons of magazine subscriptions” and two books a week — the maximum allowed — from his family and their church. He had writing materials so he could journal and also thought a lot about being elsewhere, far from the around-the-clock fluorescent-lit cell. He kept reminding himself, “I have to leave here the same as I came, that I don’t succumb to my environment.”

It was an environment where the men in neighboring cells screamed, acted out their frustration in anger and cut themselves. And there was suicide.

About halfway through his sentence Perez began to realize “my mother didn’t give birth to me to sit in a jail cell.” He had a daughter who was born two days before he was arrested and he had barely seen her.

Perez enrolled in college classes while incarcerated, studying criminal justice and is set to graduate from St. Francis College next year. His studies and change of heart helped prepare him for his first job when he was released from prison two and a half years ago. Today, he is a safe re-entry advocate with the Urban Justice Center Mental Health Project in New York City helping the newly released adjust to life outside of prison.

He also is a vocal advocate for solitary confinement reform.

Perez’s stay in solitary was relatively short. Some incarcerated people have spent 30 years or more in isolation.

Advocates like Perez have joined their voices in a growing campaign to call attention to the wide use of solitary confinement nationwide. An estimated 80,000 to 100,000 people were held in isolation in 2014, said a report from the Arthur Liman Public Interest Program at Yale Law School and the Association of State Correctional Administrators.

The U.S. Conference of Catholic Bishops called attention to the importance of the criminal justice system to rehabilitate people convicted of crimes and that imprisonment “should be about more than punishment” in its 2000 statement “Responsibility, Rehabilitation and Restoration: A Catholic Perspective on Crime and Criminal Justice.”

While the bishops did not address solitary confinement directly, they expressed a belief that prisons are places where human dignity must be respected.

Advocates for reform as well as psychologists say solitary confinement often destroys people rather than rehabilitates them.

The Washington-based National Religious Campaign Against Torture, of which the USCCB is a supporter, is one of numerous organizations calling for the end of solitary confinement.

“For us as people of faith, we really see this effort as a profoundly moral effort, that we would deny any person access to community, access to restorative justice, to, what I would say as a Methodist minister, access to redemption and a belief in God’s ability give us all a second and third and 23rd chance,” Rev. Downton told Catholic News Service.

“There’s been a real acceptance that once someone is labeled a criminal that the standard of humanity and dignity would be removed from them,” she said. “The inherent God-given human dignity of the person doesn’t end at the prison doors.”

The National Religious Campaign Against Torture has produced a documentary on solitary confinement titled “Breaking Down the Box.” The organization also has built a replica 6-foot-by-9-foot cell that it displays at programs. Its next appearance is set for June 8-10 at Hofstra University in Hempstead, New York.

In 2011, Juan E. Mendez, U.N. special rapporteur on torture with the Human Rights Council, called for a ban on solitary confinement except in exceptional circumstances and for no longer than 15 days. Mendez also said that in no case should the practice be used for juveniles and people with mental disabilities.

In January, President Barack Obama announced a ban on solitary confinement for juvenile offenders in federal prisons. He said the practice is overused and can “worsen existing mental illnesses and even trigger new ones.”

Craig Haney, a psychologist at the University of California, Santa Cruz, has researched the psychological effects of incarceration. He has found that segregated prisoners deprived of normal human interaction reportedly suffer from mental illnesses including anxiety, panic, insomnia, paranoia, aggression and depression.

The Association of State Correctional Administrators did not respond to requests for comment.

Bills to limit solitary confinement have been introduced in several states in response to concerns raised by once incarcerated people and psychologists. They have met with mixed results.

In New York, the bishops in 2000 called upon state officials to “avoid extreme forms of confinement and abusive punishment” in its statement “Restoring All the Fullness of Life: A Pastoral Statement on Criminal Justice.” In April, Bishop Edward B. Scharfenberger of Albany addressed the need for reform of solitary confinement in a column in the Times Union.

The New York Catholic conference also backs the Humane Alternatives to Long-Term (HALT) Solitary Confinement Act. The bill would limit the time anyone can spend in segregation, end solitary confinement of vulnerable people, restrict the criteria that can result in isolation and create more humane and effective alternatives for inmates.

Retired Bishop Howard J. Hubbard of Albany told CNS that the state’s bishops have worked on restorative justice issues for more than a decade. He said their concern always has been for the dignity of the inmates.

He also welcomed a settlement agreement reached in December in a lawsuit over incarceration practices in New York prisons. The agreement calls for a step-down unit to help inmates reintegrate into the general prison population, a substance abuse treatment program, a community re-entry program for people being released, incentivizing good behavior, ending the use of a restrictive diet as punishment, and disciplinary guidelines to end the use of arbitrary sanctions.

Cross country, the California Catholic Conference has pursued avenues to reform the state’s use of solitary confinement. From meeting with Gov. Jerry Brown to backing legislation placing limits on inmate isolation, the conference has staked out a consistent position that, a staff member told CNS, the bishops view as a human rights issue.

“They just felt like this is wrong. That we need to find different ways to address this. There’s different ways than keeping people in isolation for so long,” said Debbie McDermott, associate director for restorative justice at the California Catholic Conference.

Bishop Richard J. Garcia of Monterey, California, who chairs the conference’s Restorative Justice Committee, said he was troubled to see during visits to different isolation units that some inmates were held in cages. He said the men told him they feel lonely and neglected.

“It’s disconcerting that a lot of the people are left alone. Many threaten suicide. They can’t see their families for long, long times. So we have to reach out to them (state corrections officials) to say, ‘This isn’t the way to go. They’re not animals,'” the bishop said.

“When the men were not eating at Pelican Bay, certainly we advocated for them and against what was happening to them there,” Bishop Garcia said.

“I think the SHU is improved, especially at Pelican Bay, from what I’ve been hearing,” he added.

Perez is pleased that reform campaigns are gaining attention. The reform efforts are not meant to prevent prison officials from doing their job, he explained, but to ensure that administrators remember that incarcerated people must make amends for their wrong-doing and not to be further punished in isolation for even minimal rules violations.

“We’re not saying you can’t not hold people accountable,” Perez said. “But you don’t have to treat them inhumanely.”