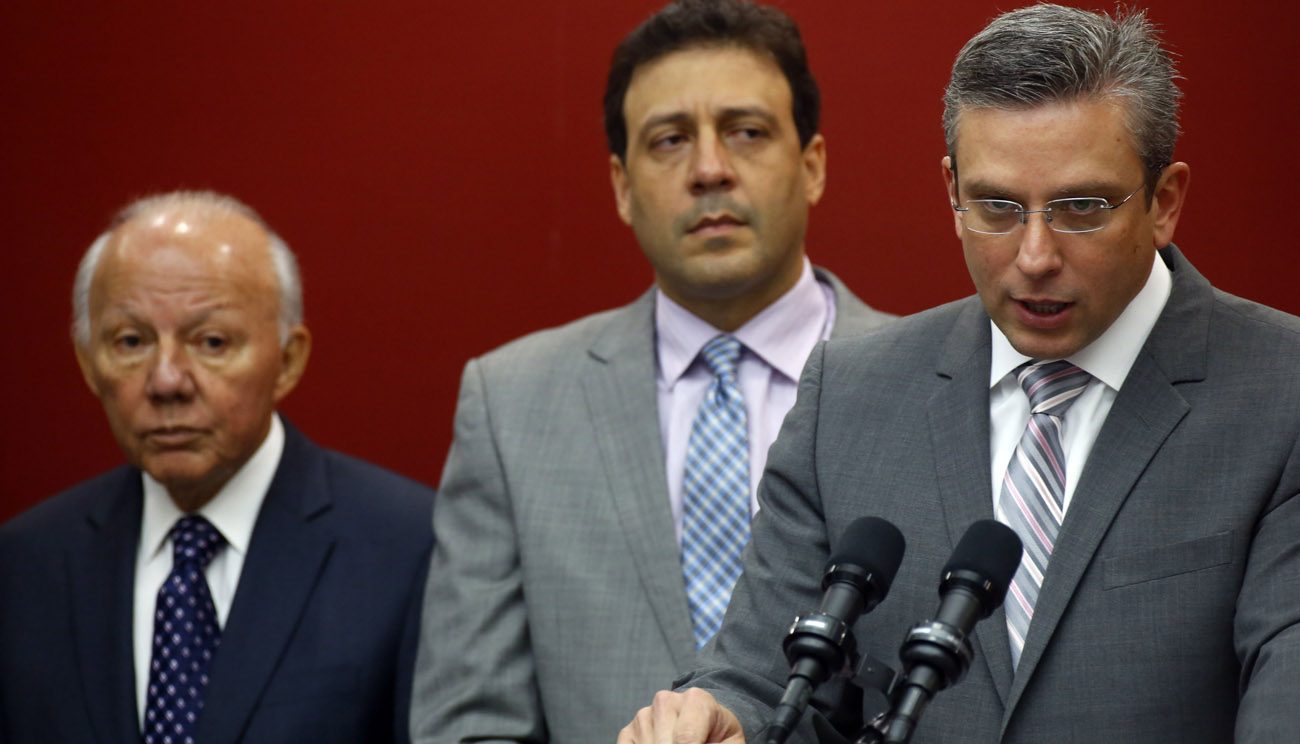 Puerto Rican Gov. Alejandro Garcia Padilla delivers a statement May 2 on the economy in San Juan. A group of religious leaders came together on Capitol Hill June 16 to pray for the people of Puerto Rico, who are facing extreme economic hardship, high unemployment and difficult access to health care. (CNS photo/Thais Llorca, EPA)

WASHINGTON (CNS) — A group of religious leaders came together on Capitol Hill June 16 to pray for the people of Puerto Rico, who are facing extreme economic hardship, high unemployment and difficult access to health care.

Sponsored by Jubilee USA at the Senate Dirksen Office Building, the service included lunch and a briefing about the Puerto Rico debt and humanitarian crises. The Rev. Stacy Martin, chief philanthropy officer for Lutheran Services of Florida, began the prayer service with a quote from Jeremiah. The Rev. Priscilla Austin, pastor of the Immanuel Lutheran Church in Seattle, followed her, with an emotional description of how the Puerto Rico debt crisis has affected her family.

“They don’t want to leave the island,” said Rev. Austin, “they have to.”

Father Camacho described his work with the poor, providing food, aid, shelter, emergency relief and help for the sick and elderly left behind by young people fleeing high income taxes.

“Five times more people need help now than they did in 2011,” he said, citing a 12 percent unemployment rate and a 56 percent poverty rate for children. “Even professionals are in personal bankruptcy … are coming to my office asking for help.”

Father Camacho discussed families divided by the migration of young people to the mainland United States.

“We have a lot of elderly people living alone because their sons live in the U.S.,” he said. He described a common situation for many on the island: a grandmother who fell and waited in the hospital from 2 p.m. to 6 a.m. before getting help from the only doctor.

“We are sad,” Father Camacho concluded, “because we don’t see a solution.”

In 2014, Puerto Rico tried to enact legislation that would allow them to restructure their $72 billion debt that has been keeping them out of the market for prospective investors. The Supreme Court ruled this legislation, called the Puerto Rico Public Corporation Debt Enforcement and Recovery Act, unconstitutional on the basis that because Puerto Rico is not a state, it is exempt from Chapter 9 of the federal Bankruptcy Code, which authorizes states to restructure their debt.

U.S. Rep. Pedro Pierluisi, a Democrat who is Puerto Rico’s sole member of Congress, also known as the “Resident Commissioner of Puerto Rico,” tried in 2015 to introduce a bill that would allow Puerto Rico to file for Chapter 9 bankruptcy, but the bill failed to pass the House of Representatives.

Now, in 2016, U.S. Rep. Sean Duffy, R-Wisconsin, has introduced a new bill titled commonly called PROMESA, Puerto Rico Oversight, Management and Economic Stability Act, will set up a seven-member advisory board to oversee Puerto Rico’s budgets and financial plans for at least four consecutive fiscal years, or whenever criteria outlined by the measure are fulfilled. In addition, PROMESA allows employers to reduce their workers’ salaries to below the national minimum wage. The bill also will also authorize Puerto Rico to use some debt relief to revitalize their public utilities to help their citizens who are without food, water, and power.

Overall, PROMESA seeks to establish a process for the gradual and constitutional restructuring of Puerto Rico’s debt while providing the island with the necessary funds to continue running. The bill has passed the House, and must pass the Senate before July 1 to become effective in time to help Puerto Rico.

Pierluisi came to the briefing to explain the bill he’d proposed. He described the havoc that local mismanagement and unequal treatment by the mainland government have wreaked on the citizens of Puerto Rico and offered hope for the new legislation.

Pierluisi then called on Congress to “resolve disparities between Puerto Rico and the mainland,” and “look at further solutions,” while this legislation goes through the process of congressional approval.

After Pierluisi’s briefing, Lucas Swanepoel, senior director of government affairs for Catholic Charities USA, praised Jubilee USA for its efforts in pushing the bill through the House of Representatives.

“Money aspects are usually the focus,” said Swanepoel, “but this is a human problem.”

Swanepoel explained that as the bill moves through the Senate, religious leaders would educate the senators about the legislation and help to move it forward.

“That’s the greatest jubilee,” said Swanepoel, “that Lutherans, Methodists, Protestants, Catholics…can come together to help the most vulnerable among us.”

The briefing ended with a reading by Rev. Austin in Spanish and in English of Psalm 23.

“The Lord is my shepherd,” Rev. Austin said as those in attendance nodded. “There is nothing I shall want.”

PREVIOUS: Bishops seek assault weapons ban, say civilians have no need for them

NEXT: Survey shows views on immigration differ among Catholics