Bishops seek assault weapons ban, say civilians have no need for them 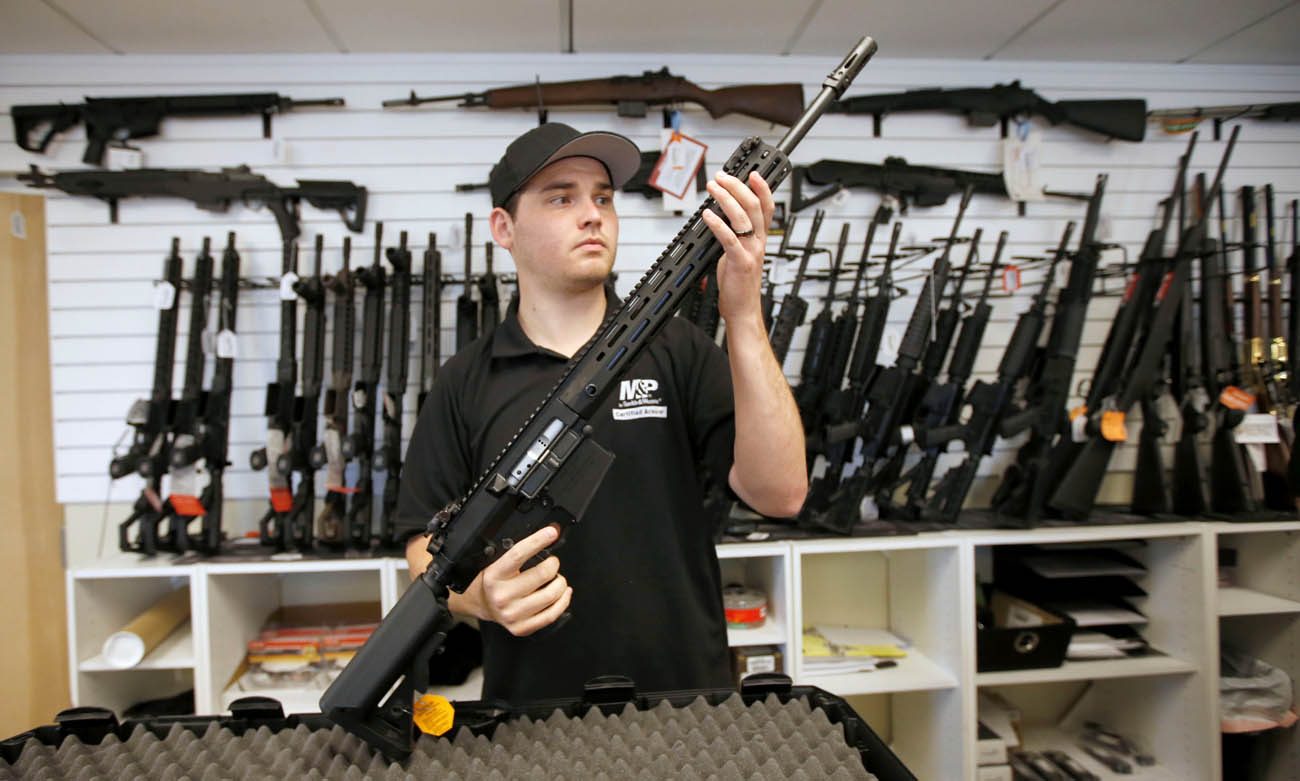 Salesman Ryan Martinez inspects a new AR-10 at the Ready Gunner gun store in Provo, Utah. Two U.S. Catholic prelates called for a ban on the sale of military-style assault weapons, saying they have no place in the hands of civilians. (CNS photo/George Frey, Reuters)

WASHINGTON (CNS) — Two U.S. church leaders called for a ban on the sale of military-style assault weapons, saying they have no place in the hands of civilians.

Archbishop Blase J. Cupich of Chicago and Bishop Kevin J. Farrell of Dallas issued their appeals in response to recent incidents in which people have been killed by attackers armed with semi-automatic rifles.

“There’s no reason in the world why these guns are available. There’s no logic,” Bishop Farrell told Catholic News Service June 22.

The bishops’ stance puts them in opposition to gun rights advocates, who say that any effort to limit the sale and acquisition of firearms would violate the Second Amendment of the Constitution.

The U.S. Conference of Catholic Bishops was weighing a statement June 23 as the national debate on the need for action on gun control rose in intensity. Since the mid-1990s, the bishops have called for “sensible regulation” and “reasonable restrictions” on firearms.

Bishop Farrell’s appeal came in a June 13 blog, a day after a gunman killed 49 revelers in an Orlando, Florida, nightclub.

In a separate statement, Archbishop Cupich responded to a string of violence in Chicago the weekend of June 18-19 in which 13 people were killed and more than 40 others were injured in shootings. One victim, Salvador Suarez, 21, was killed by an assailant with an assault rifle outside of a Catholic Church as worshippers attended Mass.

Bishop Farrell specifically pointed to the rising use of semi-automatic rifles in attacks as cause for concern and said he decided to express his moral outrage over inaction by Congress in the blog on the diocesan website. Readers overwhelmingly opposed his views in comments on the blog.

“I ask myself, ‘What’s the common denominator in all this?’ The latest incident in Orlando, a person who should not have been able to get his hands on a military-style weapon that’s destined and designed to kill did. This is not a gun that is used for self-defense. This is a gun that’s an attack gun,” the bishop told CNS.

“I respect the Second Amendment,” he added. “If (people) want to have a handgun, that’s their business. The argument that the politicians give is that if we give them (gun control advocates) an inch, they’ll take a mile. On what basis do they make that statement?”

The blog marked the second time Bishop Farrell addressed the topic of guns in a blog this year. In January, he raised moral questions about Texas’ open carry law that took effect Jan. 1, saying it was unfortunate that the state became the 45th to “embrace the cowboy mentality that permits the open carrying of guns.”

The Texas law allows firearms to be banned from church property as long as appropriate signage is posted. Bishop Farrell’s decision to not allow weapons in churches met with a mixed response, with some readers supporting his stand while others were critical of it in the comments section of the blog.

Quoting spiritual writer Father Henri Nouwen, Archbishop Cupich said June 20 that the city’s “terrible violence is destroying not only those killed and wounded, but all of us.”

“If we want to survive as a community that treasures life, liberty and the pursuit of happiness, we must act now to put an end to this carnage,” the archbishop said. “No doubt there are many causes, but we can start by getting these combat weapons off our streets.”

Archbishop Cupich urged the entire city to step up to end the violence. “Doing nothing is no longer an option,” he said.

Action on any gun control measure has been repeatedly blocked by gun rights backers in Congress. In protest, House Democrats held what they called a “sit-in” that began June 22 and extended overnight to protest Republican leaders’ inaction on guns following the Orlando massacre.

House Speaker Paul Ryan, R-Wisconsin, called the action a “nothing more than a publicity stunt” and adjourned the House session until July 5. Democrats pledged to continue to occupy the House floor throughout the 12-day recess.

In the Senate, two Republican and two Democratic gun-related measures failed to gain the necessary 60 votes for passage June 20. The measures, which observers said had little chance of passage, would have tightened background checks for firearms buyers at gun shows and on the internet; prevented anyone on the federal terrorism watch list from buying firearms or explosives; and addressed the need for improved mental health service to identify potential attackers.

After the votes, Sen. Susan Collins, R-Maine, introduced a so-called “no fly, no buy” bill to prevent individuals on the federal watch lists from obtaining firearms. Collins was flanked by Republican and Democratic senators when she discussed the bill during a June 21 news conference.

About 81,000 people, including about 1,000 American citizens, are on the FBI’s no fly list. Another 28,000 are on a “selectee” list and are subject to unusually intensive screening before flying.

She said Sen. Mitch McConnell, R-Kentucky, pledged to allow a vote on the bill at an specified future date.

Collins’ legislation also would allow anyone denied a gun to appeal through the federal courts and to recover legal costs in pursuing their case. It protects FBI counter-terrorism investigations and includes a “look back” provision to promptly notify the agency if a person who has been in the screening database within the last five years if they have purchased a firearm.

The National Rifle Association opposes Collins’ measure, calling instead for a stronger effort to fight the Islamic State group and reduce its influence in radicalizing people to strike public venues.

The NRA and other gun rights groups have long opposed any limits on guns including reinstitution of an assault weapons ban, expanded background checks and waiting periods to complete gun sales. Instead, they have sought expanded access to firearms, saying that responsible gun owners could have slowed or stopped attacks before a large amount of deaths and injuries resulted.

A report by the Congressional Research Service in 2012 estimated that 310 million firearms were in civilian hands, including 114 million handguns, 110 million rifles and 86 million shotguns, roughly one weapon for every person in the U.S.