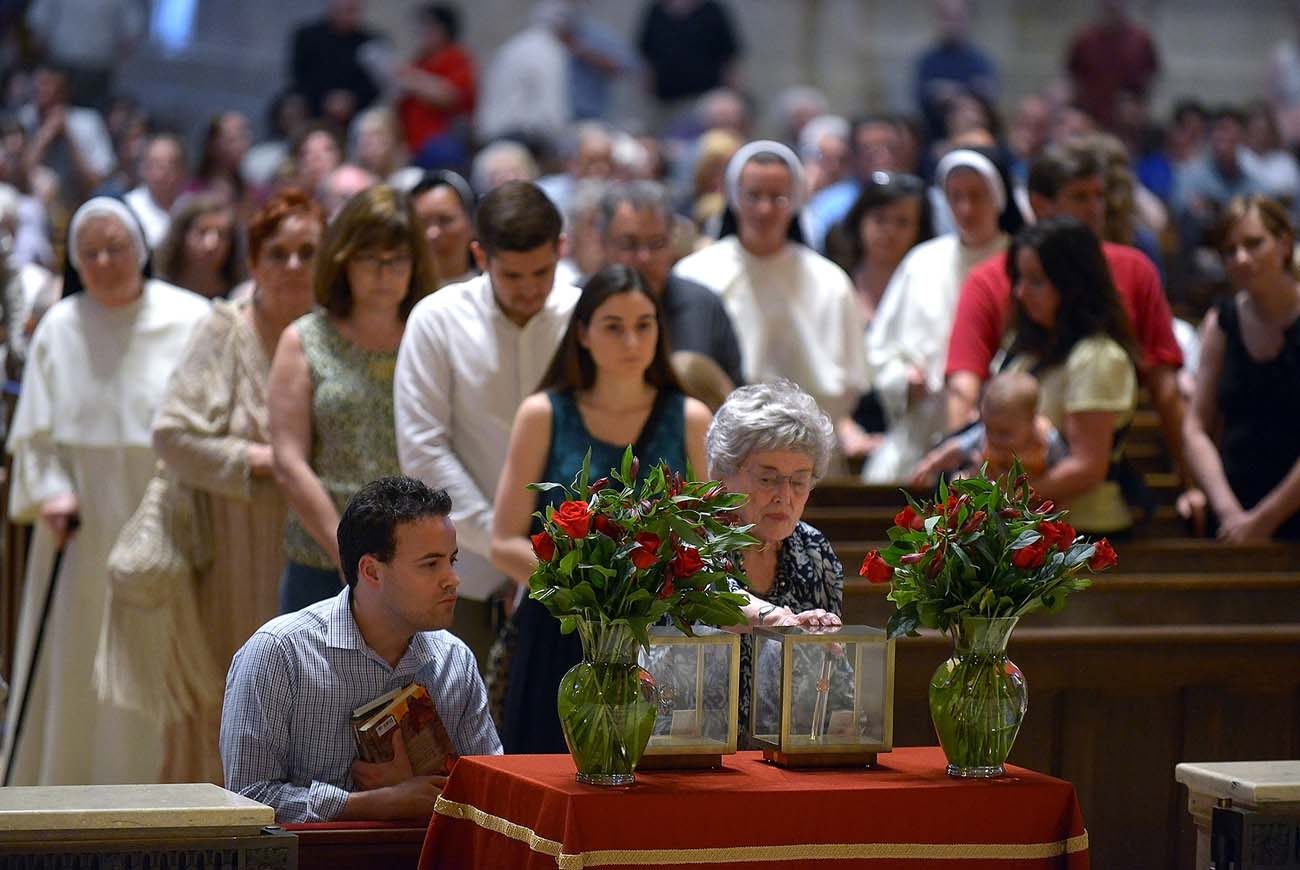 Visitors venerate the relics of St. Thomas More and St. John Fisher June 26 at the Cathedral of St. Paul in Minnesota. The relics of the two saints are on a national tour. (CNS photo/Jim Bovin, Catholic Spirit)

ST. PAUL, Minn. (CNS) — Hundreds of Catholics crowded into the Cathedral of St. Paul to venerate the relics of two English saints who are known as icons of religious liberty because of the circumstances of their martyrdom.

Relics of St. Thomas More and St. John Fisher, whose lives spanned the 15th and 16th centuries, were viewed at the cathedral June 26 as part of a national tour coinciding with the Fortnight for Freedom.

A prayer service was part of the event and included eucharistic adoration, a Gospel reading and presentations on the martyrs from John Boyle, professor of theology and Catholic studies at the University of St. Thomas in St. Paul, and Jan Graffius, curator at Stonyhurst College in England, which holds the relics.

The faithful waited up to an hour to process up the cathedral’s center aisle to the Communion rail, where the relics were displayed in two simple glass boxes. People briefly kneeled and prayed before the relics; many touched the reliquaries or pressed rosaries, medals or other holy objects against them.

Boyle’s presentation did not focus on the saints’ stance on religious freedom as much as “how they did it” — how their daily practices fostered a life of deep faith and the formation, confidence and courage they needed to face martyrdom.

“They did not set out to be martyrs, but when the time came, they were ready,” he said.

Generally better known today than his contemporary St. John Fisher, St. Thomas More daily spent early morning hours in a library and chapel in prayer and study — time he prioritized despite his responsibilities as a husband, father, lawyer and the first layman to serve as chancellor of England. He also regularly attended Mass and confessed his sins.

St. John Fisher also was known for a deep love of the Catholic Church, despite the failings of its clergy that played a role in the Protestant Reformation, which was underway during his life.

Both men began serving King Henry VIII early in their vocations. St. John Fisher taught the young Henry as a boy; St. Thomas More was adviser and friend to the king and his first wife, Catherine of Aragon. Contemporaries described both men as good, virtuous and holy. 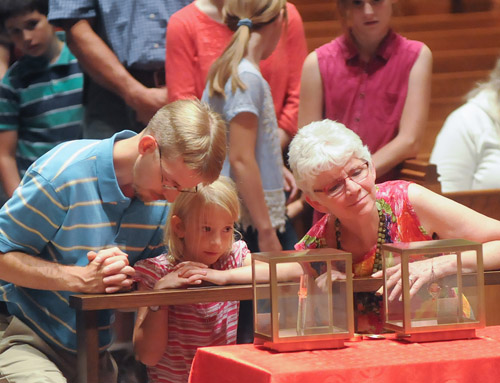 Nole German prays as his daughter Ella, 9, and Peggy Imholte, view the relics of St. Thomas More and St. John Fisher June 27 at the St. Mary’s Cathedral in St. Cloud, Minn. The relics of the two saints are on a national tour. (CNS photo/Dianne Towalski, The Visitor) See RELICS-SAINTS-CROWDS June 29, 2016.

“Goodness, virtue and holiness: This is the secret to the lives and martyrdom of these two saints,” Boyle said. “They worked hard at knowing and loving their sweet savior, Jesus Christ.”

Prayer, study and discipline helped them discern what was right, and how to act rightly, he said.

After the king divorced Catherine to marry Anne Boleyn in 1533 without an annulment from the pope, he severed ties with the Catholic Church and established the Church of England. He demanded England’s bishops sign a document acknowledging him as head of the church. Only one — Bishop John Fisher — did not.

Later, King Henry required all men who held office in England to recognize his marriage to Boleyn by signing the Act of Succession, which confirmed that his children with Boleyn were legitimate heirs to the throne. Again Bishop Fisher abstained, as did Thomas More, who had since resigned his position as chancellor.

Both men studied the king’s divorce with great care, Boyle said, and deliberated over their responses.

“They understood with remarkable clarity what was at stake at that time, which was an attack on the church,” he said.

St. Thomas More and St. John Fisher were imprisoned for treason in the Tower of London for months. They were beheaded 14 days apart in 1535; Bishop Fisher was 65, Thomas More was 57.

The relics on tour are a personal ring with a cameo of the philosopher Aristotle that St. John Fisher wore throughout his life, and a tooth and jawbone of St. Thomas More that his daughter, Margaret, saved from his severed head, which she received after it had been exposed on London Bridge.

The relics were passed down in the More family before being received into the care of Stonyhurst College’s relic collection, England’s largest. The Jesuit school in Lancashire formed in 1593 and, from its founding, aimed to preserve Catholic manuscripts, relics and other holy objects at risk of loss or destruction during the English Reformation.

Catherine Hartman, 79, and Helen Quast, 86, who are both parishioners of St. Bonaventure Church in Bloomington, said they learned of St. Thomas More as Catholic school students and welcomed the opportunity to venerate his relics.

“It’s nice to come to any kind of veneration,” Quast told The Catholic Spirit, newspaper of the Archdiocese of St. Paul and Minneapolis.

“It was wonderful,” Hartman added. “It just gives you a feeling of awe.”

Sarah Kunkel, 38, a self-described history buff, brought her son, Thomas, 9, to venerate the relics. St. Thomas More was one of the saints for whom her son is named, she said.

“I wanted him to see this,” said Kunkel, a parishioner of St. John the Baptist Church in New Brighton. “It’s such a strong character, a strong intellectual standing up to King Henry VIII at that time. I’ve always been inspired by that.”

George Younes, 38, a parishioner of St. Maron Church in Minneapolis, brought three of his four young children to venerate the relics. He said religious liberty issues — such as the Little Sisters of the Poor’s lawsuit against the U.S. Department of Health and Human Services mandating contraceptive coverage as part of the Affordable Care Act and political attacks on marriage and family — have piqued his recent interest in St. Thomas More.

The martyrs’ examples challenged him “to look at all controversial issues in the light of Christ’s church and be prepared to accept the consequences to our own lives by following the decrees of his church,” he said, “whether that means we are ostracized, we are criticized or even if we lose our own life; it is better than losing our soul.”

In St. Cloud June 27, Jean and Joe Schmitz were among hundreds who gathered at St. Mary’s Cathedral to venerate the two saints’ relics.

“These English martyrs are reminders for us to really be thankful for our religious freedom. It’s not to be taken lightly,” Jean Schmitz told The Visitor, the diocesan newspaper. “These two saints also stand for those Christians right now who are being martyred around the world.”

She said she is a longtime fan of Sts. Thomas More and John Fisher.

Prior to the veneration, over 100 people attended a showing of the 1966 classic film about St. Thomas More, “A Man for All Seasons.” Hundreds more attended the Holy Hour with eucharistic adoration led by St. Cloud Bishop Donald J. Kettler, evening prayer with Scripture and song and a brief presentation on the relics by Graffius, the curator.

“These relics remind us that faith is a gift,” Graffius said. “It is a gift that comes with a price tag, and we will all at some point in our life be asked to pay for our faith. It may be through persecution. It may be through ridicule. It may be through emotional or financial penalty. You may be asked, as Thomas and John were, to pay the final and ultimate sacrifice of defending your faith.”

In his remarks, Bishop Kettler said that, as Catholics and Americans, faith and liberty are gifts and “to be Catholic and American should mean not having to choose one over the other.”

“Our Catholic faith calls us to work together for the common good of all, all who live in this land. We are stewards of the gifts of faith and liberty. These gifts are not just for ourselves but for all people and in fact, for all nations,” he said.

He added that religious liberty is not only about the freedom to go to Mass on Sunday.

“It is about whether we can make freely a contribution to the common good of all, to immigrants and refugees, to protect those yet to be born and for those approaching the end of life, to help to provide for all family unity, education, health care, food and housing,” he said.

Following the six stops in Minnesota, the relics were in Denver and Phoenix, to be followed by Los Angeles and Washington. The relic tour already stopped in Miami, Baltimore, Pittsburgh and Philadelphia.

The “Strength of the Saints” tour is sponsored by the U.S. Conference of Catholic Bishops as part of the Fortnight for Freedom, two weeks of prayer, education and advocacy for the cause of religious freedom in the United States June 21-July 4. The Knights of Columbus is a co-sponsor.

PREVIOUS: Sainthood cause of Kansas priest who was chaplain takes a step forward