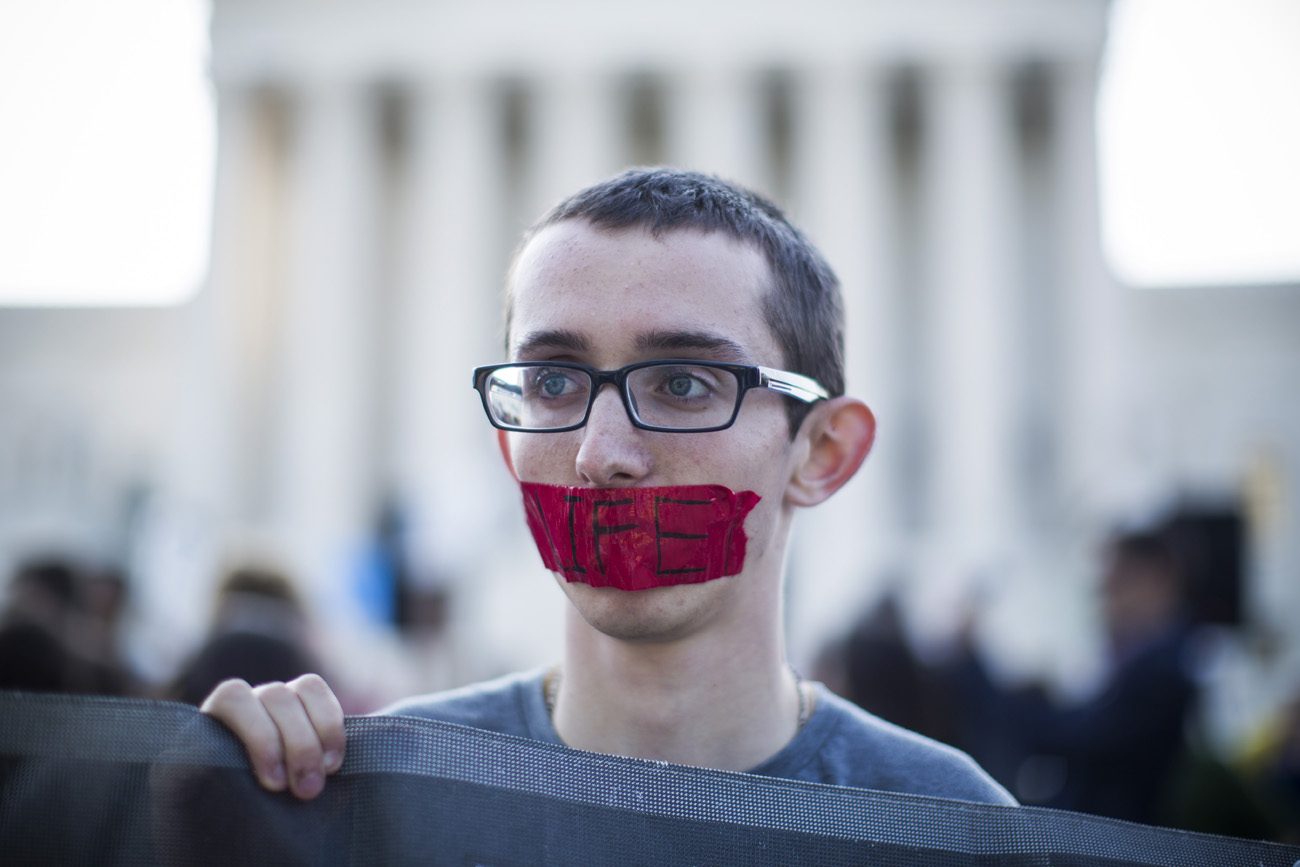 WASHINGTON (CNS) -– In a 5-3 vote June 27, the U.S. Supreme Court struck down restrictions on Texas abortion clinics that required them to comply with standards of ambulatory surgical centers and required their doctors to have admitting privileges at local hospitals.

The U.S. Conference of Catholic Bishops and other religious groups submitted a joint friend of the court brief in the case supporting the Texas law, which was similar to other state laws regulating abortion clinics across the country.

Justice Stephen Breyer, who wrote the opinion, said the restrictions on the clinics “provide few if any health benefits for women, pose a substantial obstacle to women seeking abortions and constitute an ‘undue burden’ on their constitutional right to do so.”

Reaction to the court’s ruling was immediate. Those in favor of the regulations said the court’s opinion put women at risk and those opposed to the state law called it a major victory.

“The court has rejected a common-sense law protecting women from abortion facilities that put profits above patient safety,” said Deirdre McQuade, assistant director for pro-life communications at the USCCB’s Secretariat of Pro-Life Activities.

She said the Texas law “simply required abortion facilities to meet the same health and safety standards as other ambulatory surgical centers.”

McQuade, in a statement issued after the ruling, also said: “Abortion claims the lives of unborn children, and too often endangers their mothers as well. This ruling contradicts the consensus among medical groups that such measures protect women’s lives.”

Dissenting votes in the case were from Chief Justice John Roberts and Justices Clarence Thomas and Samuel Alito Jr.

Justice Clarence Thomas wrote that the court’s decision “simultaneously transformed judicially created rights like the right to abortion into preferred constitutional rights, while disfavoring many of the rights actually enumerated in the Constitution.”

The U.S. Supreme Court’s use of the words “undue burden” echoes its 1992 ruling in Planned Parenthood vs. Casey, in which it upheld provisions in Pennsylvania law requiring parental consent for minors, a 24-hour waiting period before an abortion, filing of detailed reports about each abortion and distribution of information about alternatives to abortion. It struck down a requirement that married women need to notify their husbands before having an abortion.

In essence, the court said a state may enact abortion regulations that do not pose an “undue burden” on pregnant women.

In the March 2 oral arguments in the Texas abortion clinics case the phrase was used to promote women’s access to available clinics. Opponents of the state regulations said the restrictions were aimed at stopping abortions, because they forced clinics to close, which in turn, they said, would put an undue burden on women seeking abortions who would have to travel farther to find an available clinic.

In the years since the 1973 Roe vs. Wade decision legalizing abortion, the court has shown “extreme hostility to regulation of abortion as a medical procedure,” said Carol Tobias, president of the National Right to Life committee, which submitted friend of the court brief in the Texas case. She said court turned a corner its 1992 Casey decision by rejecting the idea of being “the country’s ex officio medical board” but it “reversed course” with the Texas decision by deciding it knew “better than representatives duly elected by the people of the United States.”

Jocelyn Floyd, an attorney with the Thomas More Society, a national public interest law firm based in Chicago that also filed a friend of the court brief in this case, disagreed with the court’s view that the clinic regulations were “unnecessary.”

Here in Illinois, she said: “We’ve seen all too well what disastrous consequences come from holding abortion providers to lower standards than other medical providers — contamination, dirty facilities, patient injury, and even death.”

He said abortion providers “should not get a free pass on commonsense safety standards.”

The Texas law requiring compliance by clinics and abortion providers had forced many of the state’s abortion clinics to close leaving seven clinics opened, primarily in major cities. After the June 27 ruling many of them are expected to reopen.

“The court’s decision failed to uphold a higher standard of care for women terminating a pregnancy,” said Ingrid Delgado, the Florida Conference of Catholic Bishops’ associate for respect life/social concerns.

She called the ruling “deeply disappointing” but also noted that Florida has a similar law but its provisions are “distinct in key ways.”

Some provisions of the Florida law are being challenged in federal court, but not the requirement on admitting privileges, she said. Those being challenged pertain to public funding of abortion providers, definitions of trimesters and records review threshold, she said.

American Life League president Judie Brown said: “This Supreme Court decision serves as a blaring wake-up call to the ‘mainstream’ pro-life movement that dinking and dithering over regulating the killing can never serve as a replacement for the fundamental battle that is not being fought — the battle for the recognition that every innocent pre-born human being is a unique person from the moment of his biological beginning.

“This case was about sensible laws designed to protect women in the wake of the Gosnell horrors; it should have been common ground for both sides of the issue,” said Maureen Ferguson, senior policy adviser for the Catholic Association

Dr. Kermit Gosnell in May 2013 was found guilty of murder in the deaths of three babies born alive during abortions in his Philadelphia clinic.

“This ruling won’t stop us from continuing to work to protect all American lives, and we won’t stop until we’ve won,” Ferguson said.

According to the Guttmacher Institute, a research group that supports legal abortion, 25 states have laws or policies that regulate abortion providers and clinics that perform surgical abortions that it claims “go beyond what is necessary to ensure patients’ safety.”

In 2015, Arkansas adopted a new restriction that requires only providers of medication-induced abortions to have an agreement with a physician who has admitting privileges at a hospital; the law does not include a similar requirement for providers whose doctors do surgical abortions.

The state of Wisconsin, where federal judges have struck down hospital admitting privileges for abortion clinic doctors, is filing an appeal with the Supreme Court.

NEXT: Father Reese to chair Commission on International Religious Freedom