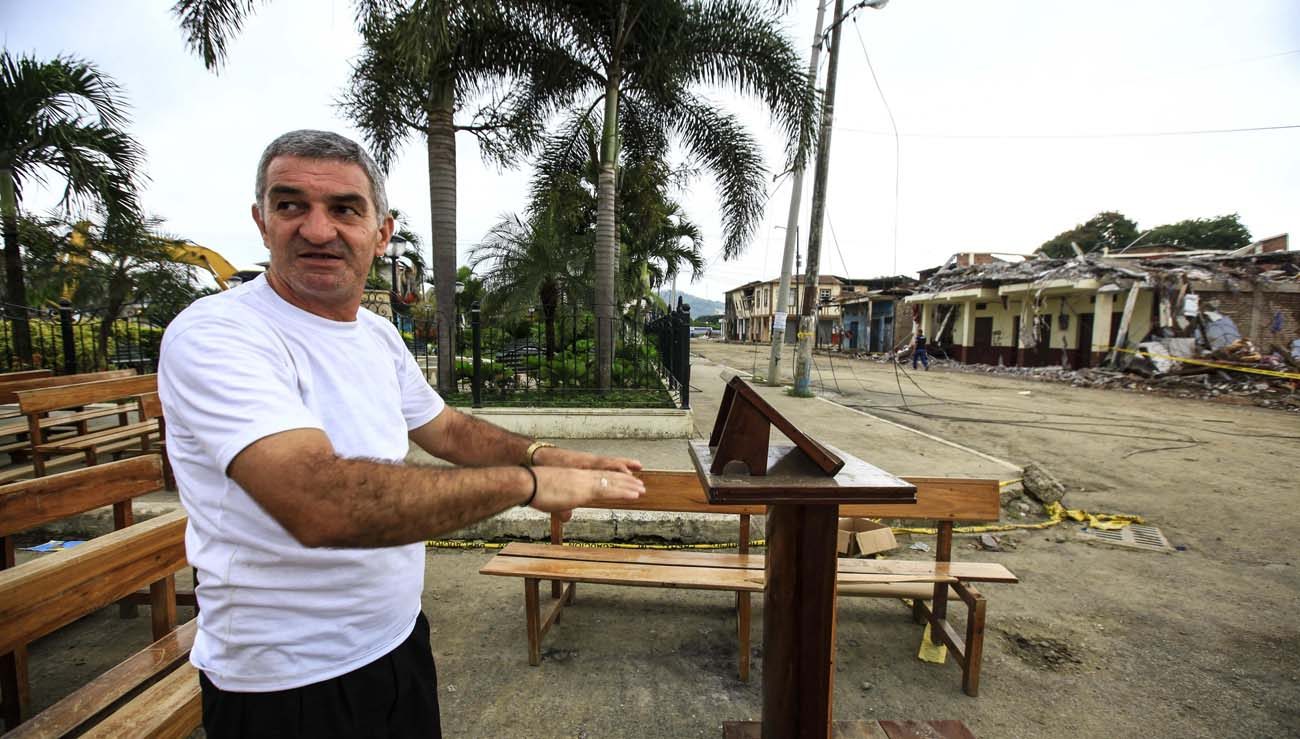 Father Leonel Zapata is seen in late April outside his church destroyed by a magnitude 7.8 earthquake in Jama, Ecuador. (CNS photo/Jose Jacome, EPA)

WASHINGTON (CNS) — Grants totaling nearly $390,000 from the U.S. bishops’ Office for the Church in Latin America will enable two Ecuadoran dioceses to reconstruct facilities damaged or destroyed in an April earthquake.

The Archdiocese of Portoviejo received $375,000 to rebuild Mary Our Lady of Help of Quiroga Church and St. Joseph Church. Funds also were provided to establish a team of engineers to plan for work on more than 25 church structures destroyed in the disaster.

Another $14,300 was sent to the Diocese of Babahojo for four smaller repair projects, including reconstructing a chapel in Beldao. The diocese is located on the edge of the earthquake zone.

Trinitarian Father Juan Molina, director of the Office for the Church in Latin America, said Auxiliary Bishop Octavio Cisneros of Brooklyn, New York, was to travel to Ecuador in late June to help assess the needs of the dioceses affected by the earthquake.

Additional funds are expected to be sent to the Ecuador church in the coming months, Father Molina said. The money was collected through the annual collection in parishes for Latin American churches.

Adveniat, the German bishops’ agency for solidarity with Latin America, and Aid to the Church in Need also are providing funds to the archdiocese.

Meanwhile, reconstruction continues in Haiti, more than five years after a strong earthquake destroyed large sections of the country around Port-au-Prince, the capital. The committee overseeing the disbursement of funds for the Latin America office approved expenditures of more than $1 million for reconstruction and administration.

The committee approved $768,000 to rebuild St. Gerard Church in Port-au-Prince, $35,000 to begin work on the Inter-Institute Center for Religious Formation in Croix-des-Bouquets and $225,000 for administration of the Partnership for the Reconstruction of the Church in Haiti, or PROCHE, a cooperative venture between the Haitian bishops’ conference, U.S. Conference of Catholic Bishops, Catholic Relief Services and Adveniat overseeing church reconstruction.

The funding comes from the $33 million that U.S. parishioners contributed after the 2010 disaster.

Editor’s Note: Donations for reconstruction in Ecuador can be sent to the bishops’ Office for the Church in Latin America, U.S. Conference of Catholic Bishops, 3211 4th St., NE, Washington, D.C. 20017.