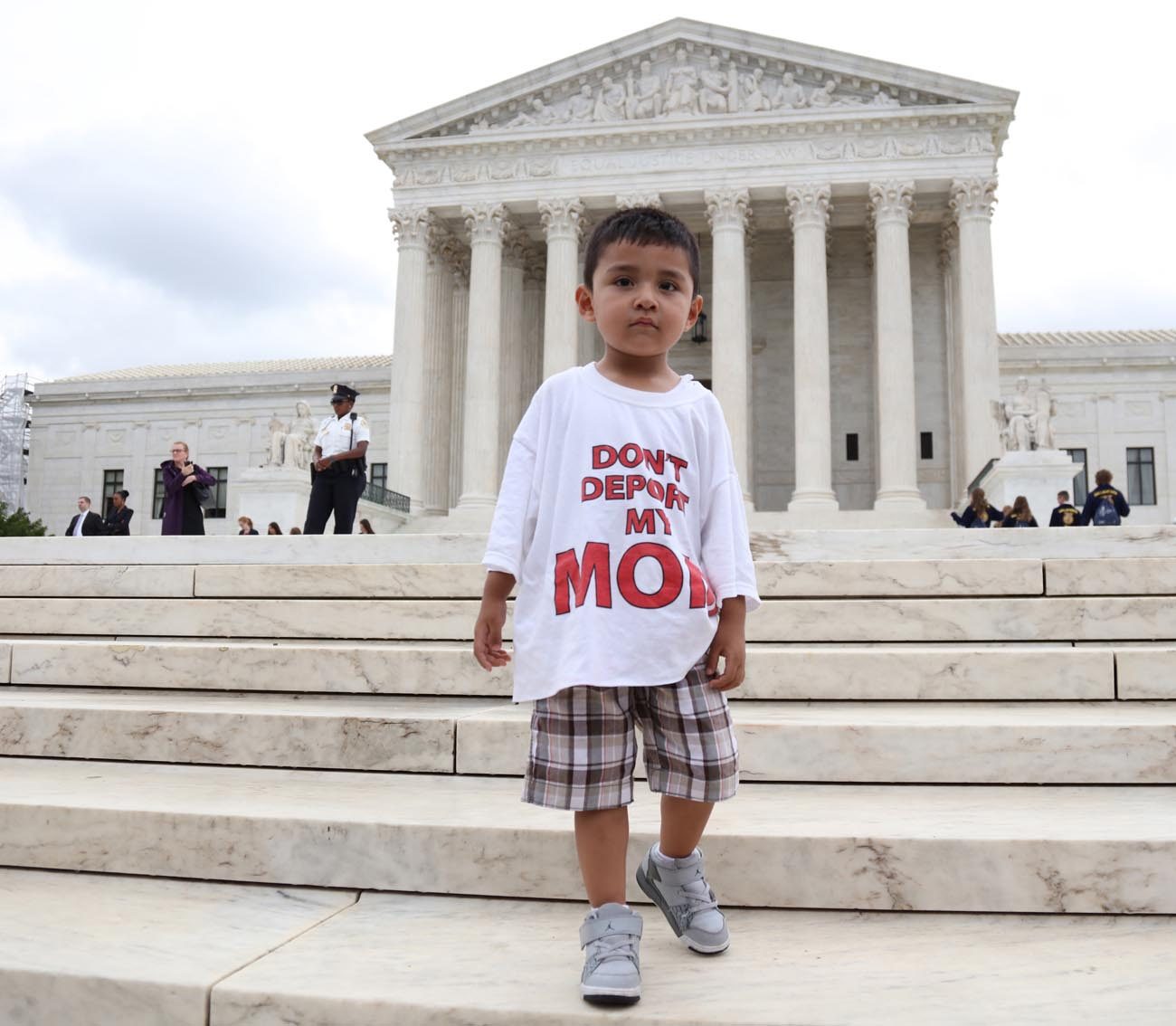 The court’s 4-4 vote leaves in place a lower court injunction blocking the administration’s immigration policy with the one-page opinion stating: “The judgment is affirmed by an equally divided court.”

Legal experts have called it an ambiguous and confusing political and legal decision that leaves many in a state of limbo. It also puts a lot of attention on the vacant Supreme Court seat that may determine how the case is decided in an appeal.

Religious leaders were quick to denounce the court’s action as a setback for immigrant families and stressed the urgency of comprehensive immigration reform.

Bishop Oscar Cantu of Las Cruces, New Mexico, called the court’s decision “a sad ruling” and said the president’s immigration plan had been “the result of years of painstaking work and committed efforts by migrant advocates, grass-roots organizations, some legislators and the faith community.”

The bishop was joined in the statement by Bishop Mark J. Seitz of El Paso, Texas, and the Hope Border Institute, a community organization on the U.S.-Mexico border. The statement also said the court’s decision exposes how the current immigration policy in the U.S. “criminalizes and scapegoats immigrants who fight for a better life for their children and families that contribute every day to our economy and communities.”

In a news briefing, President Barack Obama said the country’s immigration system is broken and the Supreme Court’s inability to reach a decision set it back even further.

House Speaker Paul Ryan of Wisconsin praised the court’s decision for making clear that “the president is not permitted to write laws — only Congress is,” which he said was a “major victory in our fight to restore the separation of powers.”

At issue in the United States v. Texas case are Obama’s executive actions on immigration policy that were challenged by 26 states.

“I am deeply disappointed by the Supreme Court’s decision … putting millions of families at risk of being ripped apart,” said Dominican Sister Bernardine Karge of Chicago, speaking for the Washington-based group Faith in Public Life.

“The stories of immigrant families are intimately woven into the tapestry of this great country, and today’s decision threatens our nation’s commitment to justice and compassion,” she said, adding that she hoped the presumptive presidential nominees and Congress makes comprehensive immigration reform a priority.

Jeanne Atkinson, executive director of Catholic Legal Immigration Network, Inc. or CLINIC, similarly expressed disappointment in the court’s decision and said the responsibility is more than ever on Congress to come up with comprehensive immigration reform.

She said the court’s decision will put “millions of long-term U.S. residents in fear of law enforcement and at risk of mistreatment in the workplace, by landlords and from abusers due to threats of deportation.”

The programs had been put on hold last November by the 5th U.S. Circuit Court of Appeals in New Orleans, upholding a Texas-based federal judge’s injunction against the executive actions. The original DACA program is not affected by the injunction.

The states suing the federal government claimed the president went too far and was not just putting a temporary block on deportations, but giving immigrants in the country without legal permission a “lawful presence” that enabled them to qualify for Social Security and Medicare benefits.

U.S. Solicitor General Donald B. Verrilli Jr., who defended the government, said the “pressing human concern” was to avoid breaking up families of U.S. citizen children, something echoed by the U.S. Conference of Catholic Bishops, CLINIC, and at least three Catholic colleges, which joined in a brief with more than 75 education and children’s advocacy organizations.

When the case was argued before the high court in mid-April, Justice Sonia Sotomayor stressed that the 4 million immigrants who might be given a temporary reprieve from deportation “are living in the shadows” and “are here whether we want them or not,” adding that the government had limited resources available for deportations.

Thomas Saenz, a lawyer representing three mothers in in the country without documentation who have U.S. citizen children, told the court his clients live in “daily fear that they will be separated from their families and detained or removed from their homes.”

On the day the Supreme Court heard arguments in the case, the plight of families was visible with many gathered in front of the court hours before the arguments began carrying placards saying: “Fight for families,” and “Love your neighbor” while a mariachi band played alongside them.

Two months later when the court issued its opinion, a small crowd stood on the steps with placards saying: “The fight continues” and “Keep families together.” One speaker emphasized that supporters of the president’s plan should not go home sad but should be prepared to vote on the issue in November.