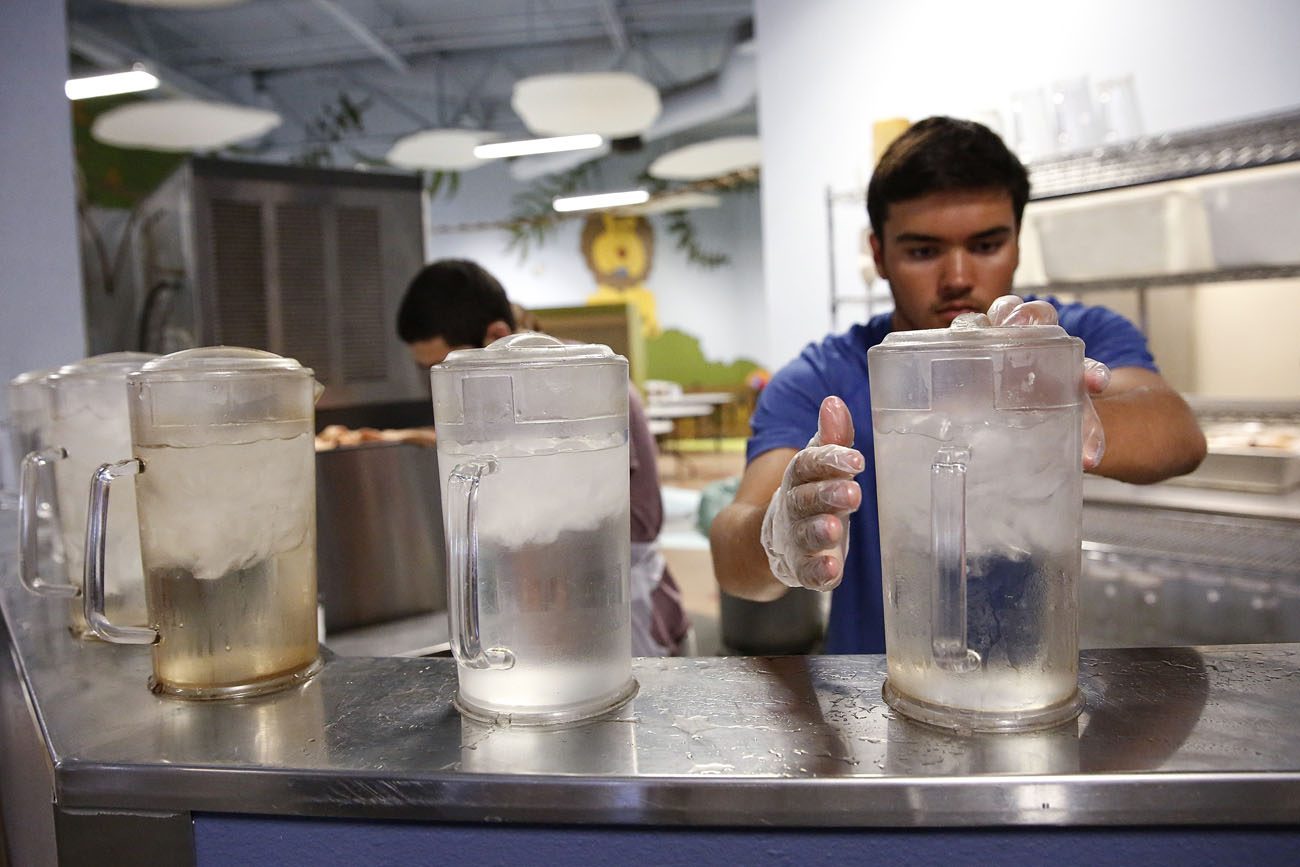 Pitchers of ice water are served up nonstop during lunch in the main dining hall of the Society of St. Vincent de Paul in downtown Phoenix June 15. Summer can be a challenge for the charity, which must step up services to provide heat relief and other aid to already struggling families and individuals. (CNS photo/Nancy Wiechec)

“This is our winter,” said Shannon Clancy, chief philanthropy officer for the Society of St. Vincent de Paul in Phoenix. “Out West when the heat turns up, the need actually increases.”

So far in June, the Catholic society has opened its dining centers for heat relief and emergency overnight shelter. The homeless and those without proper home cooling can rest and get water and snacks.

Emergency rooms see some 2,000 people with heat-related illnesses in the state each year, according to the Arizona Department of Health Services.

The most vulnerable people are those age 65 and older, people who work or exercise outdoors, infants and children, the homeless, low-income families and those with chronic medical conditions.

At least five people have died in Arizona because of the heat. Four of them were hiking June 19.

On a Saturday in early June, Charone and Lisa Williams took cover in St. Vincent de Paul’s expansive downtown dining room. An excessive heat warning was issued and the temperature rose to a record 115 degrees that day, June 4.

Charone takes medication that can make him nauseated and dizzy if he’s out in the sun.

“We’re lucky to find a place like this,” he said.

The couple has been homeless since March, bouncing between a friend’s home and shelters. They have a Section 8 housing voucher but can’t find an available apartment. They said they felt “stuck” and weren’t sure what they would do next.

“As long as (water) keeps coming in, we’ll be handing it out,” she said.

“I used to stay out here on the street,” Jones told Catholic News Service. “At the time, they didn’t have heat relief for the homeless. We had to stay outside in the heat and hope somebody would come by with water and food and ask if we were all right.”

Jones is no longer homeless, but she recalls trying to sleep in the brutal heat.

“You don’t want to even move. You’re baking, you feel like your whole body will melt. I use to put cardboard down just to separate myself from the hot gravel. It helped very little.”

Clancy said charities serving the homeless had a sort of awakening in 2005 when some 30 people died of heat-related illnesses during a particularly bad Phoenix summer.

Now, the society and its network of parishes and donors mobilize water and volunteer drives and help raise awareness of the community’s summertime needs.

“If you’re out in the elements in heat like this, it’s very dangerous,” Clancy said. “Your body temperature continues to rise and you may not be able to cool off. Our heat relief efforts bring people inside and give them a chance to do that.”

The society also dispatches mobile heat relief each weekday. A van filled with water, food, clothing, sunscreen and other resources targets areas where people live in the open. 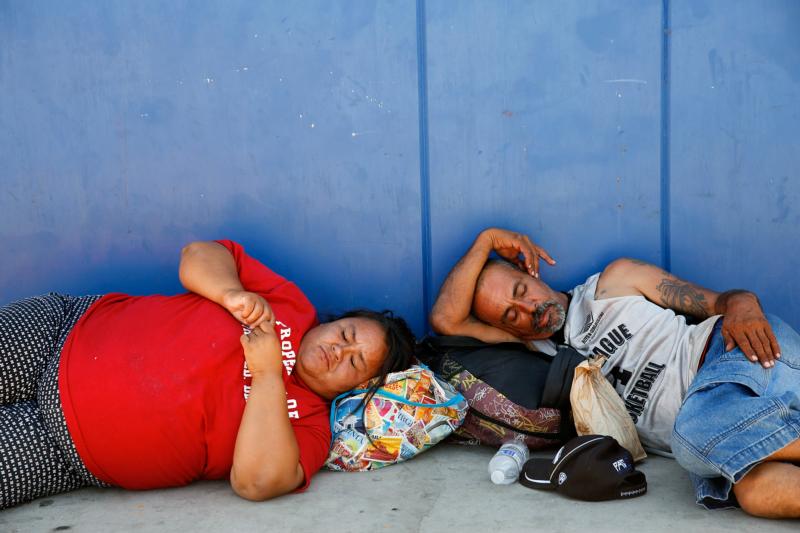 Corina Cristan, left, naps alongside an unidentified man in a strip of shade outside the main dining hall of the Society of St. Vincent de Paul in Phoenix June 14. Phoenix temperatures are expected to reach all-time highs this summer putting the homeless and others at greater risk for heat-related illness. (CNS photo/Nancy Wiechec)

The homeless are not the only concern of the society. Families already struggling to meet expenses also are hit hard in hotter months.

“We have high utility bills because of the air-conditioning that’s running all summer. We have families with kids out of school, so they may not have access to school food programs, so their food costs go up,” Clancy said. It’s at this time of year that it gets really stressful for families and they just have a hard time making it through the month with their income.”

Cheryl Cameron is a single mother of two who works at a food warehouse as a product verifier making about $10 an hour. Cameron and her children eat dinner at St. Vincent’s family dining room most evenings.

“With what I make, it’s difficult,” she said. “And summer is a lot harder. We come here for dinner because it helps with our food costs.”

Cameron said utility bills for the house she lives in with her sister and children can reach as high as $500 a month in the summer.

The Society of St. Vincent de Paul assists families in several ways: With daily meals — more than 4,000 are served each day — with food boxes, with vouchers for utility payments and with other housing assistance.

Last year in Phoenix, the society delivered $3.5 million in direct aid for utilities and shelter.

As people leave town for vacations and to escape the heat, summer can create a lull in donations and volunteers, who do the majority of the work for many aid organizations.

“Most of us are looking for volunteers to help out and help support us,” Clancy said.

St. Vincent de Paul and a local TV station teamed up to launch the “Be a Summer Action Hero” campaign encouraging people to hold food and water drives and volunteer or give to the society’s summer relief efforts. It also educates about the hot weather and what it means for vulnerable families and individuals.

Clancy said Pope Francis’ focus on mercy and his call to engage in the Year of Mercy is the perfect opportunity for people to help others.

“As Catholics we are always looking for ways that we can engage with people,” Clancy said. “It’s not so much just handing people food or delivering a food box. It’s really offering in that one-to-one service the opportunity for both people to be transformed.”

Joseph Yanez, who works the mobile outreach unit for the Society of St. Vincent de Paul, takes to the streets daily with other outreach specialists from the society looking for people who are in danger and in need of water.

He said that when they spot anyone walking the streets without water or another beverage in hand, they stop and offer water. They hand out a pallet of bottled water each day.