‘Witnesses to Freedom’ theme of church’s focus on religious liberty 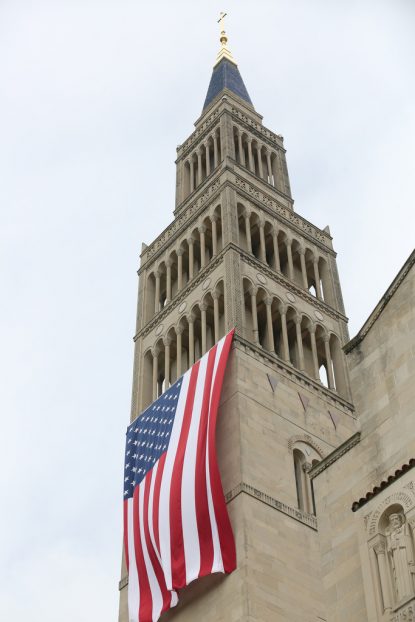 A large American flag is seen hanging from the bell tower of the Basilica of the National Shrine of the Immaculate Conception in Washington July 4, 2015. The U.S. bishops’ fifth annual Fortnight for Freedom opens June 21. (CNS photo/Bob Roller)

WASHINGTON (CNS) — “Witnesses to Freedom” is the theme of the U.S. bishops’ fifth annual Fortnight for Freedom, which opens June 21, the vigil of the feast of SS. Thomas More and John Fisher, and closes on Independence Day, July 4.

The opening Mass will be celebrated at 7 p.m. in Baltimore at the Basilica of the Assumption of the Blessed Virgin Mary, with Baltimore Archbishop William E. Lori as the principal celebrant and the homilist. Archbishop Lori is chairman of the U.S. Conference of Catholic Bishops’ Ad Hoc Committee for Religious Liberty.

The closing Mass will be celebrated at noon in the Basilica of the National Shrine of the Immaculate Conception in Washington. Cardinal Donald W. Wuerl of Washington will be the principal celebrant, and Pittsburgh Bishop David A. Zubik will be the homilist.

“Zubik” is the name given to the court case brought by many Catholic and other religious entities, including the Pittsburgh Diocese, to challenge the federal requirement that all employers, including most religious employers, provide employee health coverage of contraceptives and abortifacients even if they are morally opposed to such coverage.

The legal challenge, which the U.S. Supreme Court sent back to the lower courts May 16, has been a flashpoint in the U.S. church’s fight on religious liberty issues.

The Fortnight for Freedom is “based on love of country and of liberty,” according to the USCCB. The aim is to “encourage Catholics, other Christians and all people of goodwill to set aside two weeks to reflect on religious freedom,” it said.

The annual observance also gets to the heart of what Pope Francis said during his visit last September to the United States, the USCCB said, noting the pope “encouraged us to nurture, promote and defend the precious gift of religious freedom.”

This year the USCCB — along with Jesuit-run Stonyhurst College in the Diocese of Lancashire, England — is coordinating a U.S. tour of relics of Saints Thomas More and John Fisher to promote respect for religious liberty. Both were executed in 1535 by King Henry VIII for their Catholic beliefs.

In addition, the USCCB is highlighting the Christian witness of 14 women and men — one each day of the fortnight observance, including:

— The Little Sisters of the Poor, the order at the forefront of the court fight against the contraceptive mandate.

— The Martyrs of Compiegne, France. The 16 Carmelites were guillotined during the French Revolution for defying the government’s suppression of their monastery.

— The Coptic Christians who were killed by Islamic State militants last year.

“Reflecting on the lives of these great men and women can show us how we might serve as witnesses to freedom today,” said the USCCB statement on the 2016 Fortnight for Freedom.

“It is remarkable to see the witness of so many martyrs throughout the history of the church who love the land and people of their birth, even as they are being persecuted,” it said. “We can emulate this in our work today to promote religious freedom in the U.S., as it is of a piece with our efforts to contribute to the good of all Americans.”