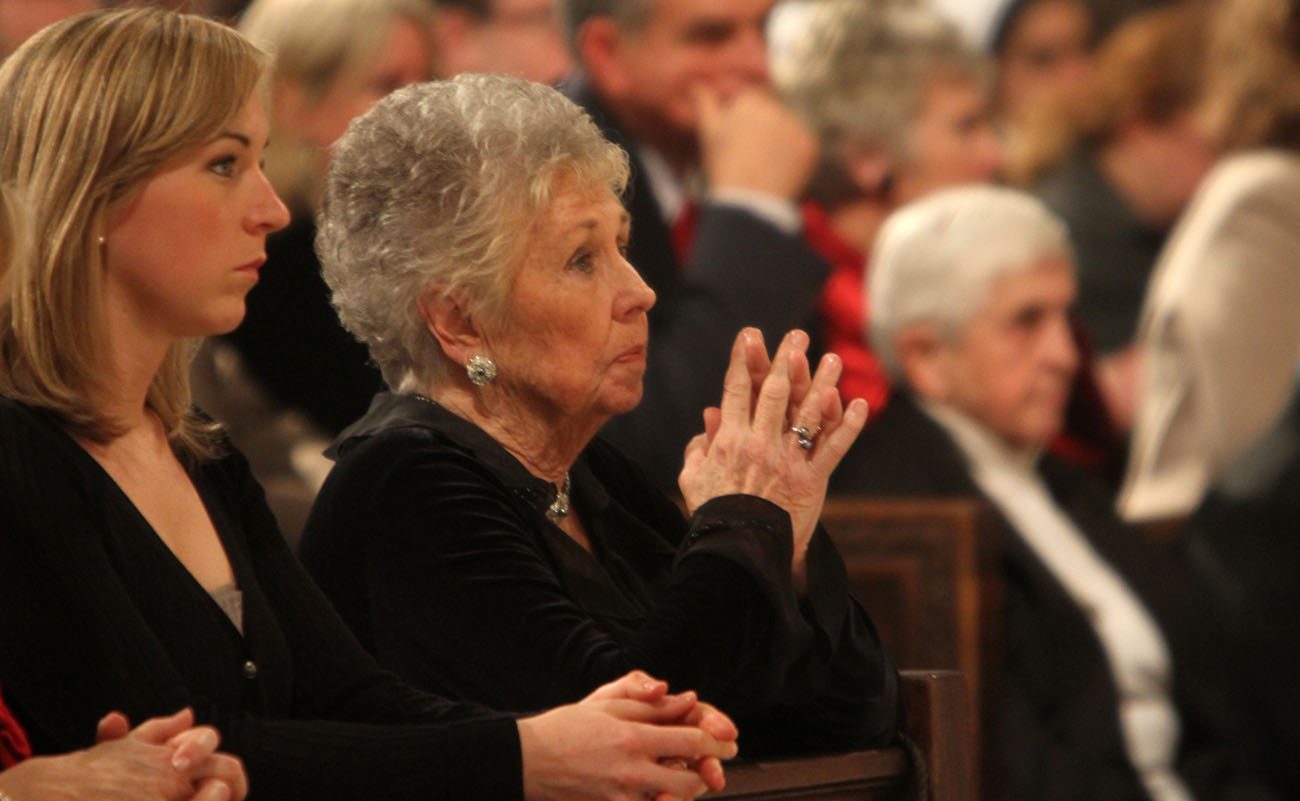 Joan Sheen Cunningham, niece of the late Archbishop Fulton J. Sheen, prays with her family during a 2009 memorial Mass for her uncle at St. Patrick's Cathedral in New York. (CNS photo/Gregory A. Shemitz)

PEORIA, Ill. (CNS) — The family of the late Archbishop Fulton J. Sheen has petitioned the Supreme Court of the State of New York to allow the transfer of the sainthood candidate’s remains to Peoria.

Joan Sheen Cunningham, 88, Archbishop Sheen’s niece and his oldest living relative, filed a petition June 13 asking that the trustees of St. Patrick’s Cathedral in New York City — where Archbishop Sheen has been entombed in a crypt following his death on Dec. 9, 1979 — and the Archdiocese of New York allow his remains to be disinterred and transferred to Peoria for interment in a crypt at St. Mary’s Cathedral.

Peoria Bishop Daniel R. Jenky is “immensely grateful” for the family’s action and looks forward to the resumption of Archbishop Sheen’s beatification and canonization cause, which has been suspended for nearly two years since the Archdiocese of New York denied the bishop’s request to move the body to Peoria.

The Diocese of Peoria similarly greeted the news with “great joy” and said with the progress already made in the cause, a beatification could be celebrated shortly after the arrival of the remains in Peoria and with the approval of Pope Francis. The diocese has been a promoter of Archbishop Sheen’s canonization cause for 14 years. The Congregation of the Causes of the Saints at the Vatican reportedly has no objection to the transfer of the body.

The petition signed by Cunningham notes that she was “extremely close” with her uncle and helped care for him up until his death. Cardinal Terence Cooke of New York asked Cunningham for permission to bury Archbishop Sheen in the St. Patrick’s Cathedral crypt.

The reasons for the family’s decision to seek the transfer of his remains to Peoria include the long efforts of the Diocese of Peoria and the Archbishop Fulton John Sheen Foundation to pursue the cause for canonization.

The petition notes he was raised in the cathedral parish, it is where he was ordained a priest of the diocese in 1919, and it is close to where his parents are buried.

The Diocese of Peoria said the transfer could take place as soon as the court grants approval.

The future archbishop was born May 8, 1885, in El Paso to Delia and Newt Sheen. The family moved to Peoria so that Fulton and his brothers could attend St. Mary Cathedral Grade School and Spalding Institute. Fulton made his first Communion at the cathedral and was a regular altar server in the sanctuary.

At his ordination, Archbishop Sheen consecrated his priesthood to the Blessed Virgin Mary before a statue of Our Lady that is still revered in the cathedral.

After completing his advanced studies in Europe, he returned to priestly ministry in Peoria until his bishop released him to teach at The Catholic University of America in Washington where he remained on the faculty for nearly 30 years.

Archbishop Sheen became a pioneer in radio and television, winning the 1951 Emmy for outstanding television personality for his show “Life is Worth Living.” Throughout the 1950s and 1960s, he was an advocate for the church’s missionary work through his leadership of the Propagation of the Faith in the U.S. He served as bishop of Rochester from 1966 to 1969 and spent his final years preaching retreats and missions.

Archbishop Sheen is the author of dozens of books, including his autobiography: “Treasure in Clay.”

In 2000, the Archbishop Sheen Foundation was officially organized and two years later, Bishop Jenky petitioned the Vatican to open the canonization process.

In 2011, the diocese submitted the case of a child, born without heartbeat or respiration, who revived after 61 minutes through the intercession of Archbishop Sheen. The following year, Pope Benedict XVI recognized Archbishop Sheen’s heroic virtue and life of sanctity, granting him the title venerable.

Officials in the Peoria Diocese have said that once Pope Francis approves beatification, it would take place in Peoria.

NEXT: ‘Witnesses to Freedom’ theme of church’s focus on religious liberty