Cardinal visits Ukraine to show solidarity with those suffering from war 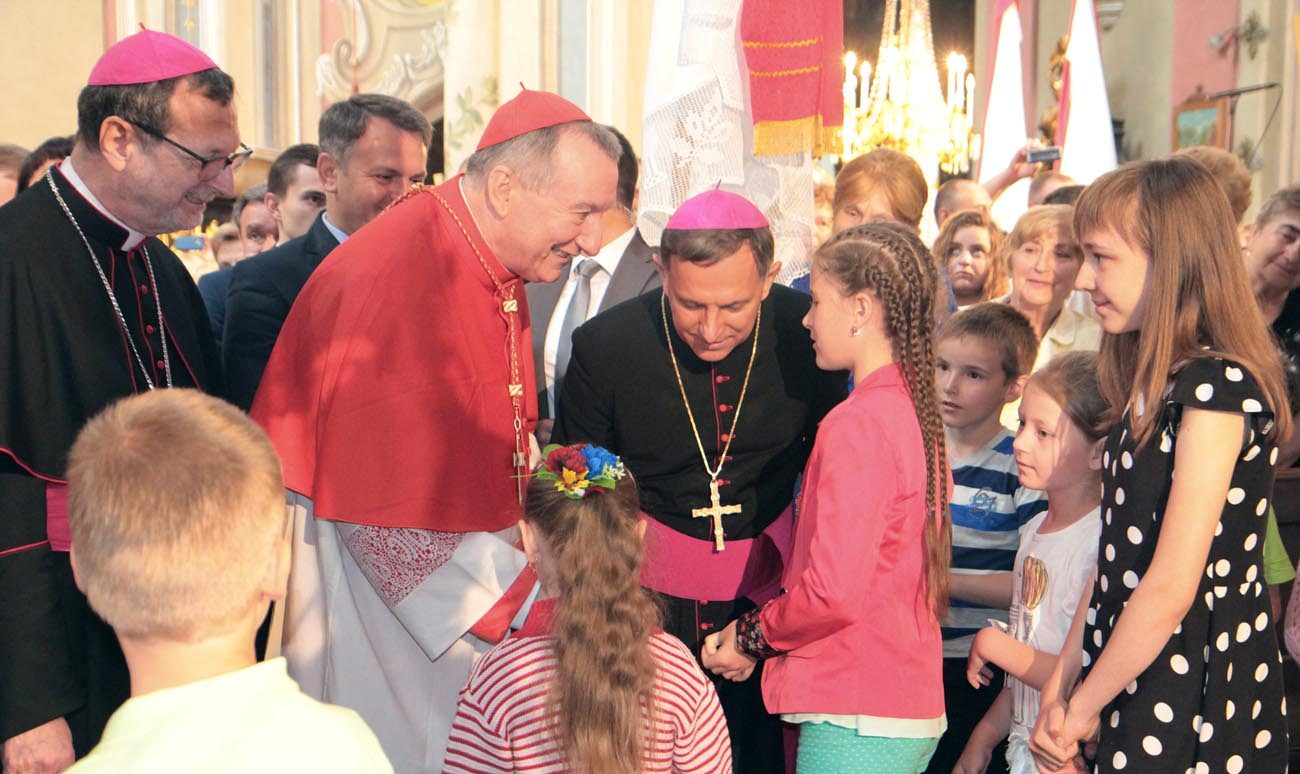 Cardinal Pietro Parolin, Vatican secretary of state, in red vestments, greets young people during a June 18 visit to Lviv, Ukraine. Although his visit included meetings with the state officials, church leaders and religious communities, Cardinal Parolin said the main purpose was to express the solidarity with people suffering from the war in the east. (CNS photo/courtesy Olena Kulygina)

LVIV, Ukraine (CNS) — Liza, 15, left Donetsk in June 2014. Her father was a pro-Ukrainian activist, and it became too dangerous for her and her mother to remain in Donetsk, which pro-Russian militants later made the headquarters of their self-proclaimed republic.

“When I left Donetsk, we thought that’s just for two-three weeks,” said Liza, who asked to identified only by her first name. She has lived in Lviv for two years, most recently in a house run by Jesuits. Her grandmother stayed in Donetsk — elderly people often stay in occupied territories to protect the property from looting.

Volodymyr Shynkarenko with his mother worked in the Donetsk opera house. They were members of the Ukrainian Catholic community and sang in the church choir.

“Mother was a co-founder of our parish and conductress of the choir,” he said of his mother, who died of cancer earlier this year.

The Shynkarenkos also left Donetsk in June 2014 because their apartment was close to the city airport, and the house was under the constant shelling. First they lived with relatives and, after they knew that the mother was ill, they moved to the Jesuit house for displaced in Lviv.

Both families are among 1.7 million internally displaced Ukrainians who moved from the occupied Donetsk and Luhansk regions. Some have returned since the hostilities ended. Hundreds of thousands live in so called grey zone, close to the conflict line.

From June 15 to 20, Cardinal Pietro Parolin, Vatican secretary of state, visited Ukraine. In the eastern city of Zaporizhzhya, he symbolically launched Pope Francis’ humanitarian plan to help Ukrainians affected by the war. Although his visit included meetings with the state officials, church leaders and religious communities, on several occasions Cardinal Parolin declared the trip’s main purpose — to express the solidarity with people suffering from the war in the east. In Zaporizhzhya and Kiev, the cardinal met with internally displaced people.

A week earlier, Pope Francis appointed Auxiliary Bishop Jan Sobilo of the Latin-rite Diocese of Kharkiv-Zaporizhzhya as president of the five-member committee to help distribute the aid.

Food, medicine and shelter are among priorities for the funds, collected April 24 in the European Catholic parishes. The amount of money raised has not been disclosed, but Pope Francis offered a personal contribution.

Cardinal Parolin said the money would be distributed to people of different religions, political views and nationalities.

“The only condition is that it is intended to people who are in a situation of real need,” said Cardinal Parolin.

Bishop Sobilo added that the committee will look for “the poorest among the poor.”

Ukrainian Archbishop Sviatoslav Shevchuk, major archbishop of the Ukrainian Catholic Church, was among the delegation accompanying the cardinal. At a news conference in Kiev, Archbishop Shevchuk said Cardinal Parolin’s visit was a call the stop the war.

“From the very beginning, we wanted to hear a clear position of the Apostolic See about the conflict in Ukraine. During his speech in Zaporizhzhya, Cardinal Parolin emphasized the sanctity and inviolability of Ukrainian borders, therefore, the aggressor has to leave the Ukrainian territory,” the archbishop said.

“The pope is with us, he and his spokesman are the voice of the Ukrainian people … the visit of the secretary is a call for us to stop the war. The pope’s humanitarian action will be a success when the weapons stops talking and diplomacy speaks out,” the archbishop said.

NEXT: Unity, honor and hope on pope’s agenda for Armenia