Duterte sworn in as Philippine president, vows to listen to the people 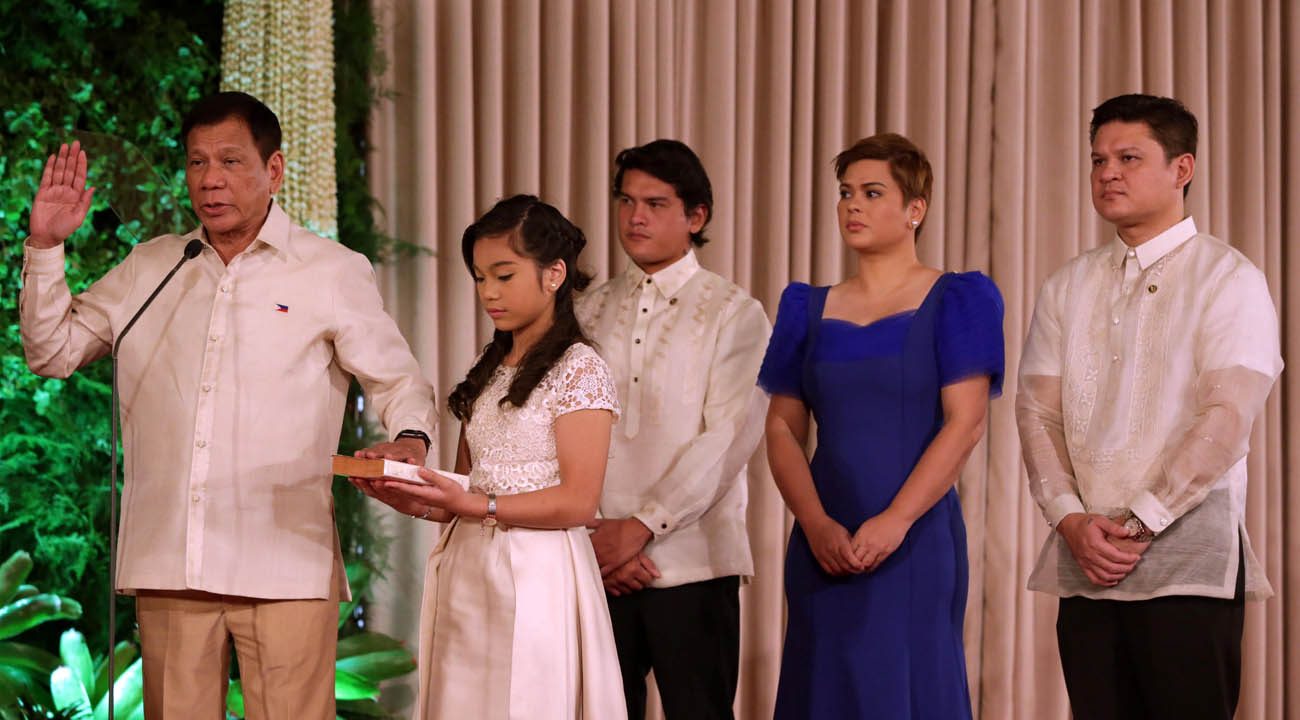 President Rodrigo Duterte takes the oath as his daughter Veronica holds the Bible during his presidential inauguration at the Malacanang Palace in Manila, Philippines. Duterte was sworn in as the 16th president of the Philippines. (CNS photo/Presidential Palace Handout via Reuters)

MANILA, Philippines (CNS) — Rodrigo Duterte, a controversial town mayor dubbed “Dirty Harry” and “The Punisher” for his tough stance on crime, was sworn in as the 16th president of the Philippines June 30.

Duterte, who won by a landslide in the May elections with 16.6 million votes, promised to “listen to the murmurings of the people” as he vowed to relentlessly fight the “problems that bedevil our country,” reported ucanews.com.

“No leader, however strong, can succeed at anything of national importance or significance unless he has the support and cooperation of the people,” Duterte said in his inaugural speech.

The new president said his administration would address corruption in government, criminality, proliferation of illegal drugs, and the breakdown of law and order.

“I see these ills as mere symptoms of a virulent social disease that creeps and cuts into the moral fiber of Philippine society,” said Duterte.

He said the real problem is the “erosion of faith and trust in government.”

The new president said he is aware that many do not approve of his methods in fighting crime, which have been described by critics as unorthodox and verging on the illegal.

Duterte, however, said he knows the limits of his power and authority and said his adherence to due process and the rule of law is “uncompromising.”

Ucanews.com reported that in a toast during Duterte’s inauguration, Archbishop Guiseppe Pinto, papal nuncio to the Philippines, reminded the new president that the “first word of a book is always the most important.”

“The initial page of the first chapter of this book, Mr. President, is dated June 30, 2016, and bears your name,” the archbishop said. “Starting today, all the women and men of this country are called to write on the blank pages of this book, engrave their aspirations and dreams, their convictions and ideas.”

In the central Philippine city of Tacloban, which was devastated by Typhoon Haiyan in 2013, disaster victims were optimistic.

“He has this freshness and unorthodox leadership and way of dealing with people and his constituency,” said Dean Lacandazo, leader of a local activist group.

“I hope he will lead a pro-people rehabilitation and reconstruction project in Haiyan-stricken areas,” Lacandazo told ucanews.com.

“I am praying for his success. He has the passion to serve, he has a heart for the common people,” said Grace Villanueva, an education official in the province of Leyte.

He also warned against the “changing and bending the rules” of government contracts and projects already approved and awaiting implementation.

“I abhor secrecy and instead advocate transparency in all government contracts, projects and business transactions,” the new president said.

Duterte is the country’s first president from the southern region of Mindanao.

NEXT: Where silence should reign: Pope will pray, not speak, at Auschwitz