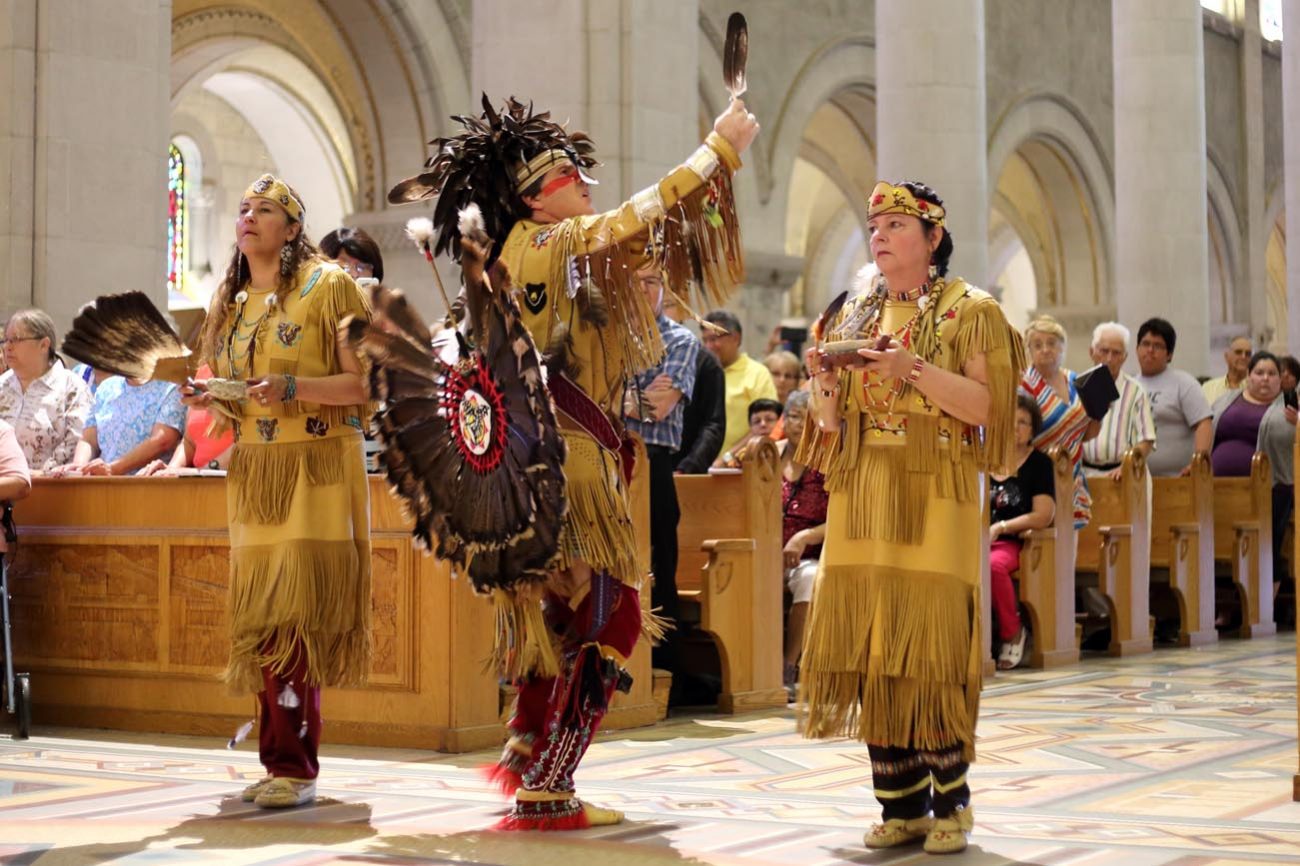 Members of the Huron-Wendat Nation perform a purification ritual at the Basilica of Sainte Anne-de-Beaupre in Quebec June 26. (CNS photo/Philippe Vaillancourt, Presence)

QUEBEC CITY (CNS) — Faith and tradition were the highlights of this year’s First Nations Sunday at the Basilica of Sainte Anne-de-Beaupre.

In a year marked by political and ethical debates regarding Canada’s First Nations, organizers decided to focus on the Christian message and the native peoples’ long-standing devotion to St. Anne.

The 1,400-seat basilica was full for the Mass attended by 1,000 people from First Nations, mostly from the Canadian provinces of Nova Scotia, New Brunswick and Quebec.

Dressed in a red shirt, John Cremo from the We’koqma’q First Nation on Nova Scotia’s Cape Breton Island chatted cheerfully with others inside the basilica. Cremo, a captain on the Mi’kmaq Grand Council, knows the place well.

“I’ve been coming for 50 years to honor St. Anne, our patron saint. She’s the saint we pray (to) for healings,” he said.

The Basilica of Sainte Anne-de-Beaupre is North America’s oldest Catholic shrine, and the First Nations have been a part of it since the 17th century.

Many take advantage of this special day to wear traditional vestments. Many natives peoples were smiling while taking pictures with tourists. Such was the case of Blair Paul and his daughter, Jada, of the Membertou First Nation in Nova Scotia.

“This is a peaceful place, very spiritual,” he said between two photos. “It’s only the second time I come. But before me, my father came for 40 years. So I came to pray.”

This year’s celebration was led by Bishop Dorylas Moreau of Rouyn-Noranda, Quebec. His diocese has three native territories, and he visits them a few times every year.

A few minutes before the Mass, Bishop Moreau acknowledged some of the First Nations’ hardships, including the sometimes difficult relationship with white police officers. He said he hopes the situation will improve, especially after the final report of the Truth and Reconciliation Commission of Canada that widely recognized the abuses suffered by First Nation peoples over many decades.

The bishop said the church still has much to learn from the First Nations.

“They’re very strong on popular devotion. We have to regain that. Popular devotion mostly has more to do with the heart instead of reason. It’s to touch and be touched. Faith means entering God’s mystery and abandoning yourself to him. The natives teach us to live our relationship with God through the heart,” Bishop Moreau said.

On the other end of the vast sacristy, the provincial superior of the Redemptorists of Ste. Anne de Beaupre was brushing up his homily. “I don’t want to mention these last year’s events, I don’t want to deliver a political message,” said Father Charles Duval. “I want us to be called by Jesus.”

He said the basilica has always been a place “where we can celebrate together. I appreciate this day because we come together as one family, while many things might divide us in our daily lives.”

Members of different Nations carried their banners in the procession. At the beginning of the Mass, the Sandokwa dance troupe from the Huron-Wendat Nation performed a purification ritual with smoke.

In his homily, Father Duval pointed out that “God is inviting us to be one nation.”

“To be able to celebrate one God together is a great testimony,” he added.

During the offertory, the Mi’kmaq Nation gave the shrine a banner depicting Our Lady of Guadalupe. Duce Sylliboy, daughter of Grand Chief Ben Sylliboy of the Mi’kmaq Nation, presented the banner. Shaken by the miscarriage of one of her daughters, she committed herself to making sure every Mi’kmaq church in Canada had a picture of the Virgin of Guadalupe.

“I know she was the patron saint of the unborn. Everything happens for a reason. … She gives us peace and comfort,” she said.

At the end of the celebration, people gathered in front of the basilica, talking and taking pictures. On the front steps, many generations posed together: From elders who have been coming for decades to children who were discovering this tradition, they were all promising each other to meet again at the basilica next year.