Laypeople push a church ‘on the move’ to peripheries, pope says 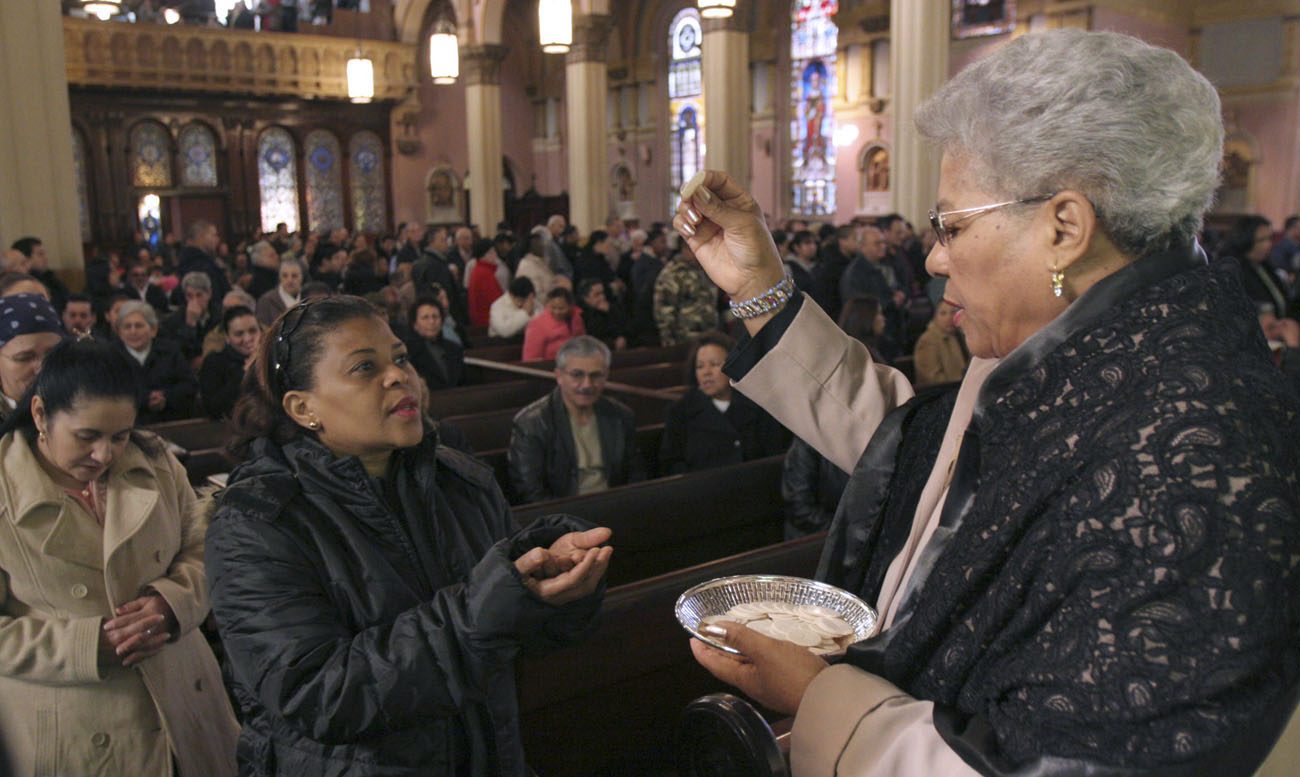 A eucharistic minister distributes Communion during a 2008 Mass at Transfiguration Church in the Williamsburg section of Brooklyn, N.Y. (CNS photo/Gregory A. Shemitz)

VATICAN CITY (CNS) — The Catholic Church needs laypeople who look to the future, take risks and aren’t afraid to get their hands dirty, Pope Francis said.

While laypeople must be “well-formed, animated by a straightforward and clear faith” and have lives truly touched by Christ’s merciful love, they also need to be able to go out and play a major role in the life and mission of the church, he said.

The pope met June 17 with members, consultors and employees and their family members of the Pontifical Council for the Laity, which was holding its last plenary assembly June 16-18.

Established by Blessed Paul VI after the Second Vatican Council, the office was meant to encourage and support laypeople’s involvement in the life and mission of the church, Pope Francis said, underlining the Italian word “incitare,” meaning to spur, urge or encourage.

“The mandate you received from the council was exactly that of ‘pushing’ the lay faithful to get ever more and better involved in the evangelizing mission of the church,” he said.

Lay involvement was in no way meant to be a “proxy” of the hierarchy, he said, but to participate in the saving mission of the church as baptized members.

Through baptism, every Christian becomes “a missionary disciple of the Lord, salt of the earth, light of the world, leaven that transforms reality from within.”

Thanking the pontifical council for all that it accomplished over the decades, Pope Francis said it was time to look to the future with hope and “to plan a renewed presence at the service of the laity,” which is always “in ferment” and marked by new problems.

The council for the laity will be merged with two other dicasteries — creating a new Vatican office for laity, family and life, which will begin functioning Sept. 1.

Much more needs to be done, he said, to open up new horizons and tackle new challenges.

“From this stems the project of reform of the Curia,” he said. The creation of a new office for laity, family and life, he said, is a sign of how much their work is valued and esteemed, and of renewed faith in the role of laypeople in the life of the church.

The pope asked the outgoing council members and staff to keep as their point of reference the image of a church and a laity “on the move” and reaching for the peripheries.

“Lift up your gaze and look ‘outside,’ look toward the many people who are ‘far’ from our world, to the many families in difficulty and needing mercy,” he said.

Many laypeople, the pope said, would generously and gladly dedicate their effort, talents and time to serving the Gospel “if they were included, valued and accompanied with affection and dedication” by priests and church institutions.

After underlining the importance of well-formed laypeople, the pope spoke off-the-cuff, saying, “We need laypeople who take risks, who get their hands dirty, who are not afraid of making mistakes, who go forward. We need laypeople with a vision of the future, not closed up in the trivial things in life.”

Young people need lay adults, especially the elderly, who can offer them their experience, wisdom and dreams, he said. The young “need the dreams of the elderly,” who — instead of being disposed of — should be “pushed” and encouraged to revitalize their dreams and “give us the power of new apostolic points of view,” he said.