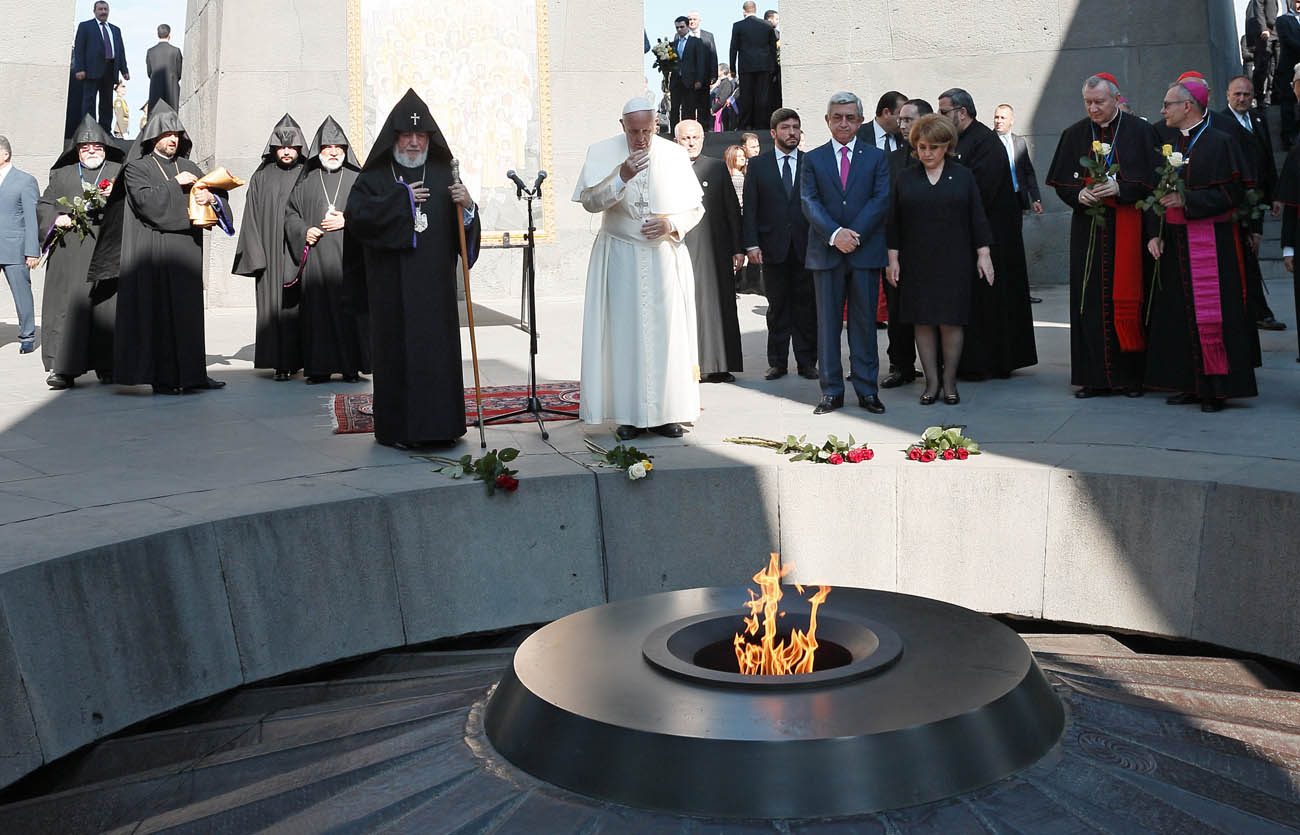 YEREVAN, Armenia (CNS) — In silence and in prayer while a mournful hymn was sung, Pope Francis formally paid tribute to the estimated 1.5 million Armenians killed by Ottoman Turks in 1915-18.

Visiting the Tsitsernakaberd Memorial, a monument to the martyrs, Pope Francis wrote in the guestbook, “May God preserve the memory of the Armenian people. Memories should not be watered down or forgotten; memory is a source of peace and of the future.”

The words were in addition to those the pope had planned to write June 25, praying that humanity would never again know the large-scale massacre of a people and that by remembering such tragedies of the past, people would learn to vanquish evil with good.

Accompanied by the Armenian Orthodox patriarch, Catholicos Karekin II, and by bishops and clergy from both the Catholic and Armenian Apostolic churches, Pope Francis blessed a wreath of yellow and white flowers placed before the towering stone shards that protect the eternal flame at Tsitsernakaberd.

He and the catholicos descended a few steps to the flame’s basin and laid roses at its edge before praying several minutes in silence.

There were no speeches at the memorial, only Scripture readings, prayers and hymns, including one that described the dead as “images of the Lamb of God” led to the slaughter “without opening their mouths to deny the Lord or the homeland.”

A choir of women in teal dresses with white veils sang the refrain: “Holy and true Lord, how long before you judge and require justice for our blood?”

A long, basalt memorial wall outside is engraved with the names of the cities of the victims. The opposite side of the wall is decorated with plagues honoring those who denounced the massacre and came to the rescue of the victims. The name of Pope Benedict XV is prominent.  The pope welcomed an estimated 400 Armenian orphans, who fled to Italy and were given refuge in Castel Gandolfo, the papal summer residence. A dozen descents of those orphans were present at the memorial for Pope Francis’ visit.

Before leaving the memorial, Pope Francis — like St. John Paul II did in 2001 — symbolically planted a pine tree, shoveling a little bit of dirt beneath the hardy sapling and dousing it generously with water.