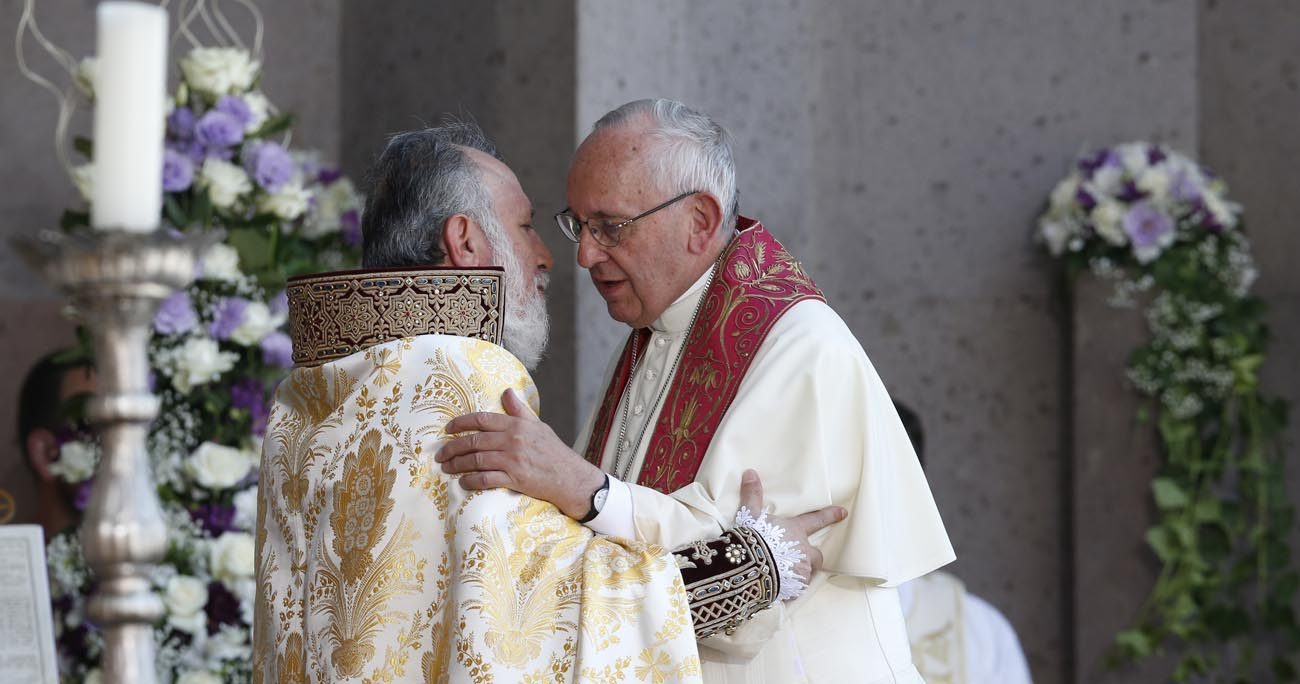 VAGHARSHAPAT, Armenia (CNS) — Recognizing that the church of Christ is one and that Christian divisions are a “scandal” to the world, Pope Francis and Armenian Apostolic Catholicos Karekin II offered their faithful the example of praying and working together.

Approaching the end of his three-day trip to Armenia, Pope Francis attended the Divine Liturgy celebrated June 26 by the patriarch at Etchmiadzin, the seat of the Armenian Apostolic Church. To accommodate the crowd, the liturgy was held outdoors at a towering stone sanctuary used for major celebrations.

Under a gold-trimmed red canopy, the patriarch and pope processed to the sanctuary together before the pope bowed to the patriarch and moved to the side. He used a small booklet to follow the liturgy, which is celebrated in “grabar,” as ancient liturgical Armenian is called.

In his homily, Catholicos Karekin told his faithful and his guests, “During these days together with our spiritual brother, Pope Francis, with joint visits and prayers we reconfirmed that the holy church of Christ is one in the spreading of the Gospel of Christ in the world, in taking care of creation, standing against common problems, and in the vital mission of the salvation of man.”

All Christians, he said, share the mission of “the strengthening of solidarity among nations and peoples (and the) reinforcing of brotherhood and collaboration.”

The catholicos warned of modern attacks on the faith, including a selfish lack of concern for “those who long for daily bread and are in pain and suffering,” as well as other “economic, political, social, environmental” problems. Yet the Gospel and the churches that preach it, he said, know that God continues to promise his loving care and wants Christians to go out preaching salvation and helping the poor.

Invited to address the gathering — like Catholicos Karekin spoke at Pope Francis’ Mass in Gyumri the day before — Pope Francis said, “We have met, we have embraced as brothers, we have prayed together and shared the gifts, hopes and concerns of the church of Christ.”

“We believe and experience that the church is one,” the pope said.

Using words from St. Gregory of Narek, a 10th-century Armenian monk declared a “doctor of the church” by Pope Francis last year, he prayed that the Holy Spirit would dissolve the “scandal” of Christian division with the power of love.

Christian unity is not and cannot be about “the submission of one to the other or assimilation,” the pope said, but rather should be an acceptance of the different gifts God has given to different Christians at different times.

“Let us respond to the appeal of the saints, let us listen to the voices of the humble and poor, of the many victims of hatred who suffered and gave their lives for the faith,” Pope Francis. “Let us pay heed to the younger generation, who seek a future free of past divisions.”

The Armenian Apostolic Church is one of the six independent Oriental Orthodox churches that were divided from the rest of Christianity after the Council of Chalcedon in 451. The six, which include the Syrian Orthodox Church, are in full communion with each other, but not with the Eastern Orthodox churches such as the Russian Orthodox.

For centuries the Oriental Orthodox were regarded by the rest of Christianity as adhering to a heretical teaching on the nature of Christ, but recent scholarship has led theologians and church authorities on both sides to affirm that the Christological differences were not doctrinal; rather, both sides profess the same faith but use different formulas to express it.

Common declarations about Christ’s humanity and divinity were signed between 1971 and 1996 by the heads of each Oriental Orthodox Church and Pope Paul VI or Pope John Paul II.

Before vesting for the liturgy at Etchmiadzin, Armenian Bishop Bagrat Galstanyan of Tavush, an Orthodox diocese that shares borders with Georgia and Azerbaijain, stood scanning the crowd. Every few seconds, someone would identify him as a bishop and approach for a blessing, which he gave with a broad smile.

The crowd at the liturgy was predominantly young. “We are an ancient people, an ancient church, with a young faith,” the 45-year-old bishop explained.

Orthodox Father Zakaria Baghumyan, who was directing press operations for the catholicos during the visit, said the pope asking for a blessing from the patriarch is “just a sign of brotherly love. It’s a sign of respect for our church and our nation.”