Nuncio praises progress made on HIV/AIDS but warns against complacency 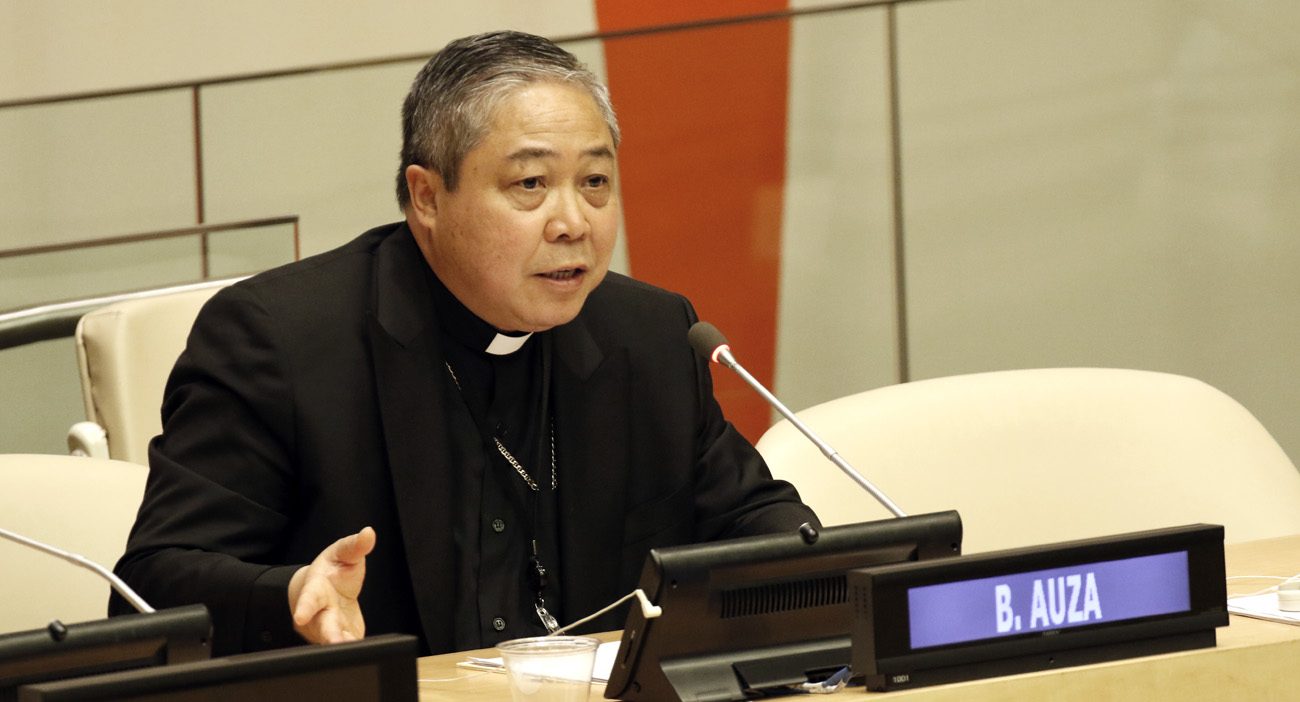 Archbishop Bernardito Auza, the Vatican's permanent observer to the United Nations is pictured in this April 28, 2016 file photo. (CNS photo/Gregory A. Shemitz)

UNITED NATIONS (CNS) — Archbishop Bernardito Auza, the Vatican’s permanent observer to the United Nations, applauded recent progress made around the world to end the AIDS epidemic and warned against complacency on efforts to end the disease.

He made the comments in a statement to the United Nations’ high level meeting on HIV/AIDS June 10.

After a brief celebratory message on the progress described in the secretary-general’s report “On the Fast-Track to End the AIDS Epidemic,” the archbishop urged the U.N. “to pay equal attention to the cautionary note raised in the same report, namely, that ‘AIDS is far from over … despite remarkable progress.'”

Archbishop Auza explained that many Catholic organizations avoid complacency by reporting “persistent obstacles” to the eradication of HIV and AIDS, such as limited access to treatment and health care in underdeveloped countries; the interruption of health care services for those who do not live in “HIV ‘hot spots'”; and a tremendous lack of “appropriate, affordable, accessible ‘child-friendly’ formulations and dosages for pediatric use.”

He stated that health care centers constantly run out of medication, diagnostic tools and supplies, which drastically impedes HIV and AIDS treatment in many places. The archbishop lamented that women and children are denied treatment or prevented from accessing health care because of stigmatization as a result of their HIV status, and emphasized that “stigmatization can never be an excuse to exclude or leave anyone behind.”

Rather than consider the case closed, the archbishop called on the international community to create goals and strategies that are “anchored in reality.”

Another obstacle that Archbishop Auza touched on was the fact that in many areas, health care is “a privilege for those who can afford it.” As a result of little or no access to health care, the archbishop said, “as many as 50 percent of HIV positive children die before their second birthday,” a statistic that can be addressed if drastic measures against HIV/AIDS continued to be taken.

To some degree, the issue has begun to be addressed, he noted.

He said there have been two meetings at the Vatican with executive officers of several pharmaceutical companies to plan a more effective response to children living with HIV. Those leaders, the archbishop said, agreed that “providing affordable, appropriate and accessible HIV medicines and diagnostic tools for pediatric use is an urgent global goal.”

The archbishop concluded his statement with a universal call to action: “Together let us muster the will, continue to sharpen the technical expertise already available and find the resources necessary to provide access to diagnosis, care and treatment, not only for a privileged few, but for all.”

NEXT: Last priest who was imprisoned in Dachau camp dies