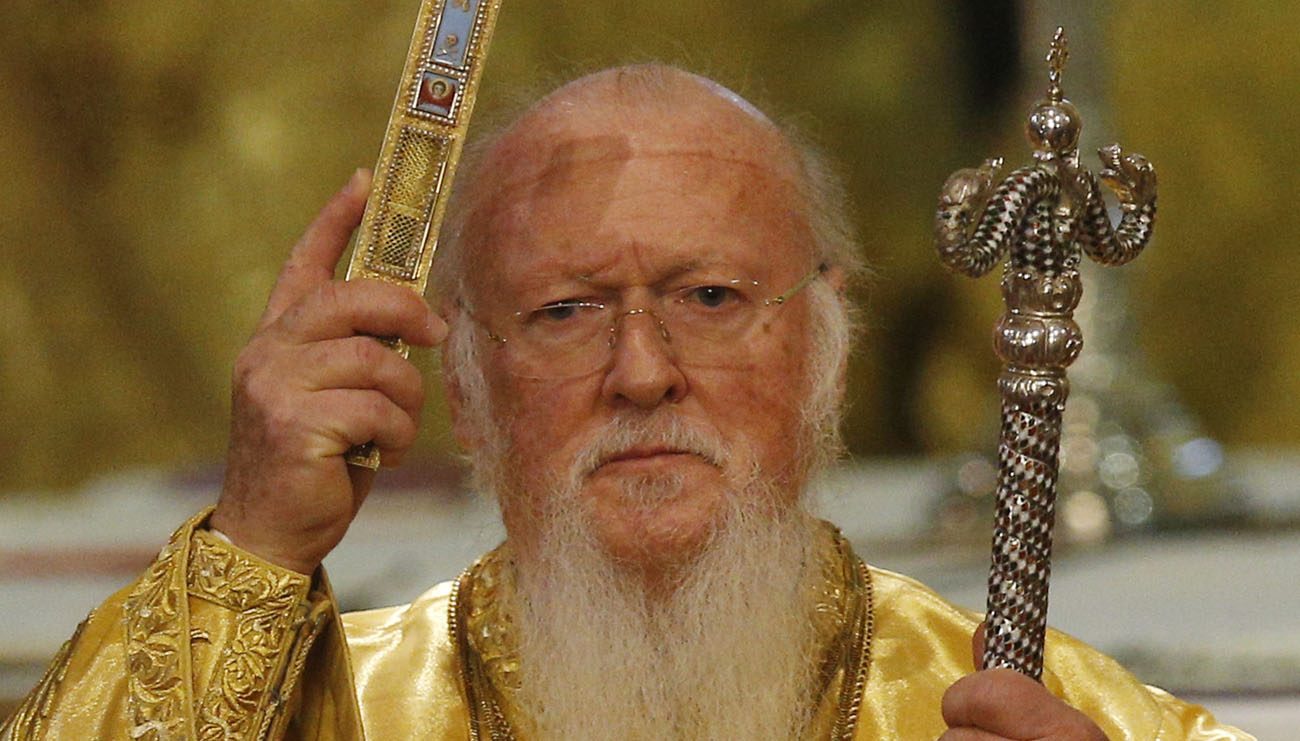 Ecumenical Patriarch Bartholomew of Constantinople delivers a blessing during a 2014 Divine Liturgy attended by Pope Francis in the patriarchal Church of St. George in Istanbul. (CNS photo/Paul Haring)

ROME (CNS) — Ecumenical Patriarch Bartholomew of Constantinople called on his brother patriarchs and primates of the Orthodox churches to honor their commitments and join him for the Great and Holy Council of the Orthodox Church.

Four of the churches — the Antiochian, Bulgarian, Georgian and Russian Orthodox — announced they would not attend the gathering scheduled for June 19-26 on the Greek island of Crete.

The patriarchs and primates of the 14 autocephalous or self-governing Orthodox churches met in Switzerland in January and voted unanimously to convene the council, which would be the first pan-Orthodox council in more than 1,000 years. The 14 primates also adopted the procedures to be followed and the draft texts to be voted upon. But in the days leading to the meeting’s scheduled opening, the synods of some of the churches objected to parts of the proposed texts, the procedures or both.

Arriving on Crete June 15, Patriarch Bartholomew — the “first among equals” of the Orthodox primates — said participating in the council is a “sacred mission.”

Church leaders who decide not to attend, he said, bear responsibility for reneging on their commitment to realizing “this vision held over many years, which all our churches cherish, to declare and proclaim the unity of our Orthodox Church and to examine and reach a common resolution of the problems that are of concern to the Orthodox world.”

Cardinal Kurt Koch, president of the Pontifical Council for Promoting Christian Unity, and Bishop Brian Farrell, council secretary, were to attend the meeting as observers at the invitation of Patriarch Bartholomew.

Just a few hours after the patriarch arrived in Crete, Orthodox theologians — including the ambassadors of Georgia and Romania to the Holy See — held a conference in Rome to discuss the content of the six documents proposed for the council and, more broadly, to speak about the importance of the council for demonstrating Orthodox unity.

Tamara Grdzelidze, the Georgian ambassador and former staff member of the World Council of Churches, told conference participants that the Orthodox Church describes itself as “divine and human.” The controversy surrounding the pan-Orthodox council, she said, demonstrates “the human part needs a lot of work.”

While the intra-Orthodox differences are garnering headlines, she said, “the Orthodox churches, when they decided to convene this council after 1,200 years, were not concerned about any dogmatic question — they do not have a problem of dogmatic unity or spiritual unity — but how to apply this unity in today’s world. That is the problem.”

The documents that were to be considered at the council are largely pastoral, including regulations regarding marriage and fasting and organizing church life in countries outside the traditional Orthodox territories. One document is focused on Orthodox relations with other Christians and another tries to explain the mission of Orthodoxy in modern societies.

The discussions, Grdzelidze said, “should have renewed the synodality of the church,” which is its ability to bring people with different points of view and experiences together under the guidance of the Holy Spirit to give a united response to challenges.

“It is one thing to say that we are spiritually together and we are one,” she said. “But if we don’t practice it to make decisions, then it is very difficult to prove it to the world.”

Problems, she said, can be “discussed, addressed and discerned only in a spirit of conciliarity where brotherly love and prayer prevail.”

Bogdan Tataru-Cazaban, Romanian ambassador to the Vatican and former professor on the Orthodox theological faculty at the University of Bucharest, told conference participants “it’s a miracle” that the Orthodox churches have maintained their spiritual and dogmatic unity given historical situations — from war to communist oppression — that prevented leaders of all the autocephalous churches from meeting for centuries.

In organizing the pan-Orthodox council, he said, the Orthodox churches clearly are still battling the “phantoms” of that troubled history.

The struggles should not surprise or scandalize people, the ambassador said. “Throughout history, unity always has been a work in progress.”

PREVIOUS: Bishops call on Filipinos not to bully or harass gay people

NEXT: Nuncio praises progress made on HIV/AIDS but warns against complacency