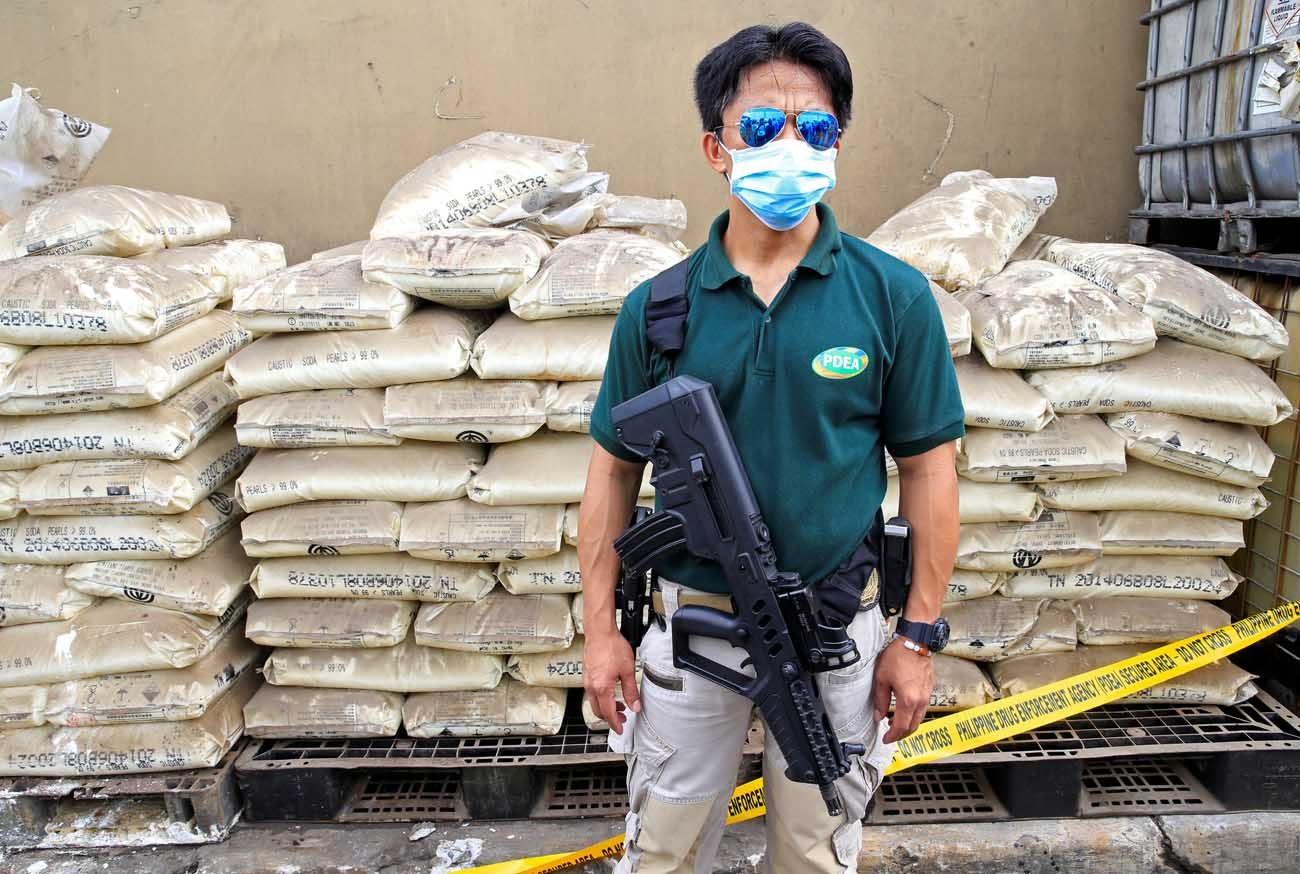 An agent of the Philippine Drug Enforcement Agency stands guard June 16 in front of chemicals used in the production of crystal meth, or Shabu, near Manila, Philippines. Philippine church leaders expressed words of caution in the wake of recent killings of suspected criminals, after voters there elected Rodrigo Duterte, who ran for president on the promise to rid the country of crime during his first six months in office. (CNS photo/Romeo Ranoco, Reuters)

MANILA, Philippines (CNS) — In light of a spike in killings of suspected criminals, Philippine bishops appealed to law enforcement officials to use “reason and humanity.”

A June 20 pastoral letter touched on five points police ought to consider regarding killing of suspected criminals. In addition, Manila Cardinal Luis Antonio Tagle released a novena for the protection of the Philippines to be prayed starting June 21, nine days before the country’s newly elected leaders officially take office.

In the pastoral letter, the bishops said the concept of “shoot to kill” can only be legitimately carried out under three circumstances: “only first, when there is unjust provocation; second, when there is a real, not only conjectural, threat to your life or to the lives and safety of others; third, when there is due proportion between the threat posed and your own use of a firearm aimed at the threatening subject.”

It added, “Suspicion is never the moral equivalent of certainty, and punishment may be inflicted only on the ground of certainty.”

President-elect Rodrigo Duterte ran for president on the promise to rid the country of crime during his first six months in office. Since he was elected May 9, police statistics showed 29 suspected criminals were killed by law enforcement. That is more than half the 39 killed from Jan. 1 through May 9.

The Philippine National Police did not say whether there was a direct link between the deaths and the policy of the incoming administration. The British news agency Reuters reported “speculation has been rife” that officials with various local police departments had started to go after drug lords that could claim close ties to them.

Since he was elected, Duterte has emphasized his administration would be offering millions in reward money to security forces for killing criminals that hold various positions in drug-dealing operations. He also said he would not hesitate to go after corrupt police officials who are found to have ties to drug operations.

Duterte was mayor of Davao City in the southern Philippine island of Mindanao for nearly 25 years. Human rights advocates have said he was linked to death squads responsible for more than 1,400 extrajudicial killings in Davao.

The bishops reminded the faithful that it is “never morally permissible” to receive reward money for killing suspected criminals. It said it was every Catholic’s duty to report vigilante activity.

In late May, the Philippine peace observer of the Rome-based Sant’Egidio Community, Alberto Quattrucci, wrote in an essay that concern over “the dark and disturbing tone (of) the statements of the president-elect remained.”

But Quattrucci said the recent phenomenon of electing a strongman or strongwoman into office was not unique to the Philippines, and that the people who elected such leaders into office should keep tabs on how well they would keep their promises.

Quattrucci said Duterte’s election to the Philippine presidency offered a “glimmer of light” for the government’s peace agreement with the country’s largest Muslim rebel group, the Moro Islamic Liberation Front. The agreement signed in the spring of 2014 hit a major setback last year, when efforts to pass a law that would create an autonomous area in the Muslim-majority part of Mindanao failed.

Duterte has vowed his administration would pursue peace with Mindanao-based groups, including various Muslim rebel factions that had been at odds with the government for decades.