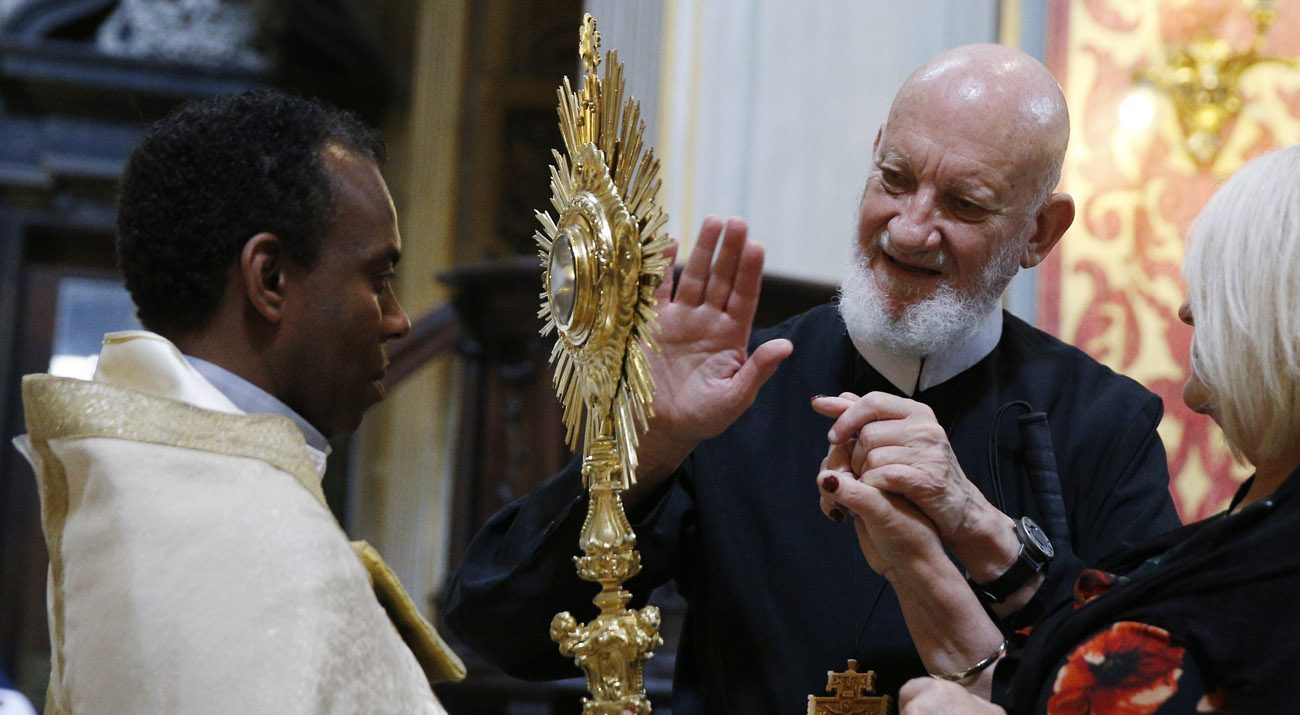 Redemptorist Father Cyril Axelrod, who is deaf and blind, touches a monstrance during exposition of the Eucharist at Chiesa Nuova in Rome June 10. (CNS photo/Paul Haring)

ROME (CNS) — No matter how complicated it is to do, all children have a need and a right to religious education and access to the sacraments, said a priest who was born deaf and became blind 16 years ago.

Opening the Year of Mercy jubilee celebration for the sick and persons with disabilities, Redemptorist Father Cyril Axelrod insisted sign language, tactile sign language and body language are “gifts of the Holy Spirit” meant to help Christians share the Gospel with all people.

Standing in the sanctuary of a Rome church June 10, the priest from South Africa used International Sign Language for brief introductory remarks, then took questions from the congregation that was made up mostly of Italian Catholics who are deaf and their family members.

The Italians signed their questions in Italian Sign Language, and a translator took both of Father Axelrod’s hands and signed the questions for him using the tactile form of the language. She then stepped aside to watch his reply and relay it to those present.

One man wanted to know how Father Axelrod, who was born Jewish and deaf, ended up becoming a Catholic priest. A deaf man from Turin asked how to get a local parish to provide catechism classes to children with disabilities. And the mother of a deaf girl in Rome told Father Axelrod that a parish priest refused to allow her daughter into a first Communion class, saying “she wouldn’t understand it anyway.”

“Jesus is a gift for all,” he said. “Don’t worry about words, words, words. Give the children holy Communion!”

His remarks were greeted by applause from those who could hear and by waving hands on the raised arms of those who were participating with sign language.

“Catechesis must be available for people of all ages and all abilities,” he insisted. But it is not easy. Each child who is deaf or blind or has another disability may need tailor-made faith formation. But any person filled with faith will learn to rely on the Holy Spirit and the Spirit’s gifts to communicate joy, love and a belief that Jesus, who loved human beings so much that he died for them, is present in the Eucharist.

“Many years ago, before I was Catholic, I was Jewish,” he said. “I would notice how deaf people did not know anything about the faith, so I wanted to become a rabbi. But God chose something different for me and I became Catholic.”

At the time in South Africa, he said, there were no special services for deaf Catholics and there was no signing at Mass.

“I felt strongly that they needed to hear God’s message and that I was called by God to bring the Good News to all people,” Father Axelrod said. “My vocation is to help deaf people open their hearts to see how powerful God is in their lives.”

The Redemptorist travels the world ministering to other deaf Catholics and advocating on their behalf. He encourages parents of deaf children to help them learn advanced sign language so that they can continue to grow in their understanding and expression of their faith.

But he has also worked with deaf children who have severe physical and developmental difficulties and, he said, he brings the Gospel to them as well. And not only that, he said he prepares them for first Communion and gives them the Eucharist — even when that means by intinction, dipping the consecrated host in the consecrated wine so it is soft enough for those with swallowing difficulties to ingest.

All children learn about God first of all from watching their parents, he said. Deaf children are particularly attentive to body language and facial expressions. They recognize joy, love, awe, sorrow and gratitude.

They can learn that Jesus, who is all-loving, is present in the Eucharist. And they can be taught to express sorrow for their sins before opening their hands and their mouths to receive the one who loves them, Father Axelrod said.

“You can see when they understand that Jesus is there,” he said. “The joy is on their face.”

NEXT: Love, not some idea of perfection, leads to happiness, pope says