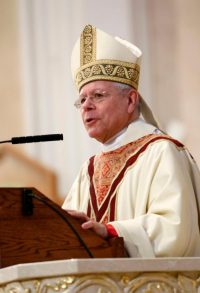 MANCHESTER, N.H. (CNS) — Bishop Peter A. Libasci of Manchester is urging Catholics to pray and fast for peace in response to the ongoing violence in the U.S. and around the world.

“The current civil unrest in our country, the acts of unspeakable violence in Orlando, Dallas, Baton Rouge, and in Nice, France, the violence and political instability in Turkey, and the ongoing suffering in the Middle East — all are clear expressions of a rampant evil in our time,” Bishop Libasci wrote in a July 17 statement, saying: “Individual Catholics as well as the church as a whole must do more.”

The letter, addressed to New Hampshire Catholics, asked them to commit to a day of fasting and partial abstinence Aug. 12. He also directed that special prayers for peace be said at Masses Sunday, Aug. 14, and urged Catholics to also go to Mass Aug. 15 to say additional prayers for peace.

Meanwhile, the Holy League based in La Crosse, Wisconsin, and the Men of Christ are organizing a novena for the nation to take place Aug. 15-Oct. 7.

In his letter, Bishop Libasci also asked “religious leaders of all persuasions, and all people of good will” to join Catholics in solidarity “as a visible sign of hope in our world.”

“I am calling on all people to pray for an end to violence,” he wrote.

“Regardless of our differing religious beliefs, or differences in culture and background, the ongoing bloodshed in our country and abroad unites us in shock, horror and outrage. Let us turn to Almighty God with acts of atonement and reparation and ask him to grant to our world his healing peace.”

Bishop Libasci, writing nine days before a priest was killed while celebrating Mass near Rouen, France, said: “Calamity in our streets and the rampant seething of perverse evil in our world, always seeking more to devour, causes me to wonder how each of these horrors can be met with the same tired phrases of shock and outrage and now-routine expressions of sympathy.”

The bishop said the day of fasting for adults should be one full meal and two smaller meals and should be considered as a time to make communal penance for the current civil unrest and to pray for the conversion of hearts.

For the Aug. 14 Mass, he suggested that prayers be taken from the Roman Missal’s Masses for various needs and occasions — “In Time of War or Civil Disturbance.” He also suggested that Catholics make every effort to attend Mass Aug. 15, the Solemnity of the Assumption of Mary, which is not considered obligatory since it falls on a Monday.

He said churches throughout the state will have exposition of the Blessed Sacrament and recitation of the rosary which historically is prayed during times of war and unrest as a special appeal to Mary for peace. Some parishes will also have a procession with a picture, statue, banner or icon of Mary.

U.S. Cardinal Raymond L. Burke, patron of the Knights of Malta, has endorsed the “Novena for Our Nation” and a national rosary rally planned for the feast of Our Lady of the Rosary, Oct. 7, in Washington sponsored by a group of Catholic laity and priests supported by the Holy League and Men of Christ.

“There is no doubt that our beloved nation is in one of the worst crises which it has ever experienced, a profound moral crisis which generates division on all levels,” Cardinal Burke said in a statement. He is spiritual adviser to the Holy League.

“Today we find ourselves in a spiritual battle. Government actions and court rulings are in conflict with God’s law,” Father Richard Heilman, Holy League president, said in a statement. “Persecution of traditional religious belief and practice is unprecedented. In this Jubilee Year of Mercy, we are called upon to help turn our country back toward God. … There is no stronger weapon in this spiritual battle than the rosary.”

NEXT: Brooklyn recycling center creates community while serving those in need