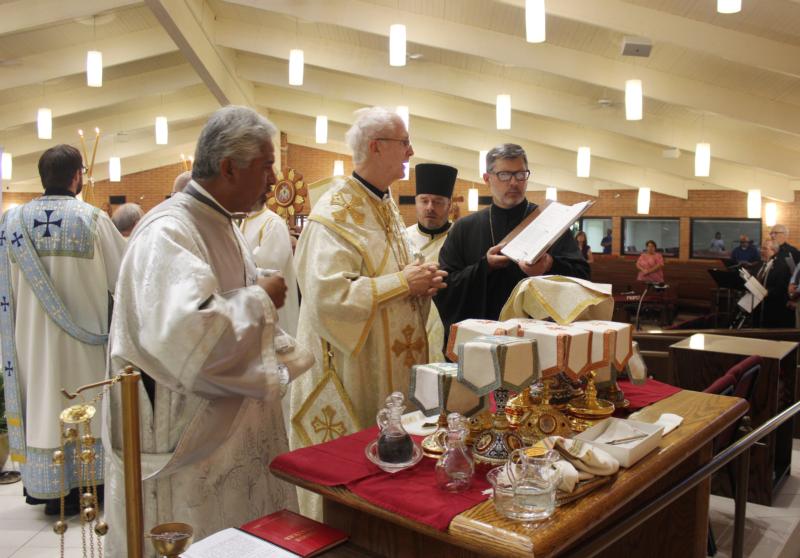 Bishop John S. Pazak, center, is the new head of the Holy Protection of Mary Byzantine Eparchy of Phoenix. He was enthroned July 20 during a Divine Liturgy at St. Helen Roman Catholic Church in Glendale, Ariz. (CNS photo/courtesy Kathleen Slonka, Eparchy of Phoenix)

GLENDALE, Ariz. (CNS) — In a liturgy packed with rich symbolism and ancient tradition, the Holy Protection of Mary Byzantine Eparchy of Phoenix celebrated the enthronement of Bishop John S. Pazak as its fifth bishop.

Archbishop William C. Skurla of the Byzantine Archeparchy of Pittsburgh, and a former bishop of the Phoenix-based eparchy, prayed the words of enthronement over the new bishop during a Divine Liturgy that took place at St. Helen Catholic Church in Glendale July 20.

The Byzantine Catholic Church is one of the Eastern Catholic churches in full communion with Rome.

Bishop Pazak, who spent the past 15 years as the bishop of the Ss. Cyril and Methodius Byzantine Eparchy in Toronto, processed to the front of the church followed by Archbishop Skurla and Archbishop Christophe Pierre, the apostolic nuncio to the U.S. Bishops and clergy from across the country — including Bishop Thomas J. Olmsted and Bishop Gerald F. Kicanas, who head, respectively, the Latin-rite dioceses of Phoenix and Tucson — also attended along with Catholics from throughout the eparchy.

“I am truly pleased to be with you today,” Archbishop Pierre said after reading the May 7 proclamation appointing Bishop Pazak. “I know that you join with me in offering to him not only our heartfelt congratulations, but also the assurance of our prayerful support as he takes on the very important responsibilities of chief shepherd of this community of faith.”

“Receive this pastoral staff with which you are to watch over Christ’s flock that has been entrusted to your care,” Archbishop Skurla prayed at the enthronement.

The congregation responded with cries of “Axios! Axios!” — Greek words meaning “he is worthy.” Throughout the liturgy, almost entirely chanted, there were echoing refrains of “Lord have mercy” and “God grant him many years.” Archbishop Skurla then escorted Bishop Pazak to the throne, officially taking the reins of the eparchy.

Father Diodoro Mendoza, ordained in 2011 by Bishop Gerald N. Dino, Bishop Pazak’s immediate predecessor, said that during the liturgy, he was struck by a sense of unity despite the vastness of the eparchy which spans the entire Western U.S., including Alaska and Hawaii.

“Even though we are so widespread and far apart, there is a union that exists, a unity that exists among us and that is of course our bond with the bishop,” Father Mendoza told The Catholic Sun, newspaper of the Diocese of Phoenix.

Bishop Dino, who retired in May after eight years as head of the eparchy, noted that one of the biggest challenges Bishop Pazak will face is the enormous amount of travel that comes with the post. “I traveled constantly. In eight years, I put on maybe a million or more air miles,” Bishop Dino said, adding that what he enjoyed most about his tenure was ordaining men to the priesthood and diaconate.

“They are good men, holy men that will be wonderful spiritual directors and pastors. The new bishop will continue my work and the priests and the people will like him very much.”

During his homily, Bishop Pazak declared that he planned to visit all the parishes in the eparchy during his first 18 months, depending on how long his responsibilities last as apostolic administrator of Toronto. He also delved into the message of the Gospel, taken from Luke, in which Jesus addresses the synagogue and is rejected.

“They are ready to throw him over the cliff, but he walks untouched through the angry synagogue audience,” Bishop Pazak said. “This incident is a reminder that being politically correct isn’t that ‘bringing glad tidings to the poor’ that Jesus announced. Jesus challenged his local synagogue and so must we during this Year of Mercy.”

Society must learn to respect “every single human being who is made in the image and likeness of God” and Christians must act with mercy, he said. “Our world needs the witness of Christ’s unconditional mercy that we proclaim so often in our liturgy. Divine mercy must illuminate our minds, and more importantly, our hearts and our life’s journey.”

Michael Pazak, the bishop’s younger brother by exactly one year, noted that the day of the enthronement was the same day that Neil Armstrong stepped on the moon during the 1969 Apollo landing, uttering his iconic “one giant leap for mankind” quote.

“This is a giant step for all of us in our growth in Christ,” Michael said of the enthronement. Kathy Pazak, sister of the bishop, agreed.

“You’re in very good hands with my brother. I think he will continue to be patient, kind and filled with wisdom.” Their mother, she said, “wanted her boys to be close together in their golden years.”

Bishop Olmsted said he was touched by the Byzantine liturgy. “They have different traditions, different prayers, but it’s the same Eucharist, the same sacred Scriptures, the same love for Christ.”

The Scriptures and liturgy come alive for Latin-rite Catholics who attend a Byzantine liturgy, he said, and “I trust they do the same when they come to our sacred liturgies. We help one another grow in an even deeper love for Christ.”

NEXT: Catholics urged to fast, pray for peace; group plans novena for nation