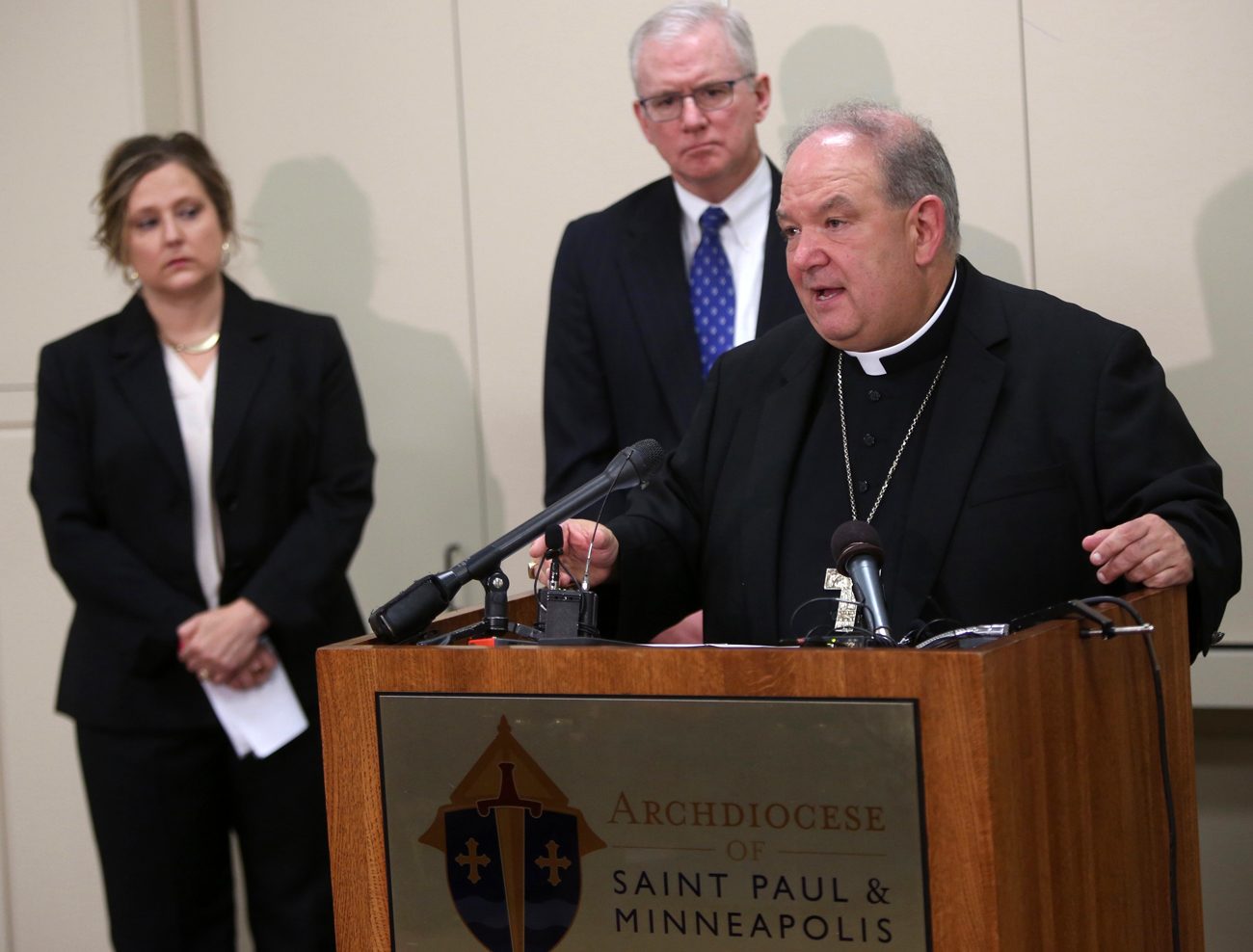 ST. PAUL, Minn. (CNS) — Standing before reporters and cameras July 20, Archbishop Bernard A. Hebda said the Archdiocese of St. Paul and Minneapolis failed in its handling of the case of Curtis Wehmeyer, a former priest who pleaded guilty in two courts of abusing three brothers while pastor of Blessed Sacrament in St. Paul.

“We failed to give priority to the safety and well-being of the children he hurt over the interests of Curtis Wehmeyer and the archdiocese,” Archbishop Hebda said. “In particular, we failed to prevent Curtis Wehmeyer from sexually abusing children. Those children, their parents, their family, their parish and others were harmed. We are sorry. I am sorry.”

The archbishop’s statement followed the announcement that the Ramsey County Attorney’s Office, under the leadership of Ramsey County Attorney John Choi, had dismissed criminal charges filed last year against the archdiocese, and the parties had amended a settlement agreement they reached in December on a related civil petition.

“Words are not enough,” Archbishop Hebda acknowledged. “We must, we will and we are doing better. Far-reaching changes are underway.”

He pointed to the archdiocese’s inclusion of more laypeople in its safe environment protocols, as well as the impact of Ramsey County’s oversight of the archdiocese’s policies and procedures and compliance with them.

“Over the past year, we worked with Mr. Choi and his team to define how the archdiocese can best create and maintain safe environments for children in our parishes, schools and communities,” he said. “Over the past six months, we have demonstrated our commitment to that path. Today, we humbly acknowledge our past failures and look forward to continuing down that path to achieve those vital, common goals that together we all share.”

Janell Rasmussen, archdiocesan deputy director of ministerial standards and safe environment, noted that since the agreement was reached, archdiocesan leaders have been working closely with Choi and his team and will continue to seek their advice and assistance.

“A decision had to be made: Do we fight the charges in court … or do we work with the Ramsey County Attorney’s Office to try to make amends to those harmed and achieve justice for all in the broadest possible way. We chose the latter. Cooperation was the right avenue to achieve a just solution.” — Archbishop Bernard Hebda

Describing the day as one of “solemn reckoning and self-assessment,” Rasmussen said their work will never be done. “Today, tomorrow and every day we will ask ourselves, ‘Are we doing all we can to make sure children are safe?'”

In June 2015, the Ramsey County Attorney’s Office, whose jurisdiction includes St. Paul, filed criminal charges and a civil petition against the archdiocese, alleging it failed to protect children in its handling of Wehmeyer’s case. The charges included three counts of contributing to the need for protection or services, and three counts of contributing to a juvenile’s delinquency.

In the summer of 2010, Wehmeyer, then a priest of the Archdiocese of St. Paul and Minneapolis and pastor of Blessed Sacrament in St. Paul, sexually abused two brothers — ages 12 and 14 — in a camper trailer he had parked on parish grounds and on a camping trip.

The boys disclosed the abuse two years later, and Wehmeyer was removed from ministry. In 2013, their older brother revealed that he, too, had been abused by the priest during a camping trips in 2008, 2009 and 2011. In several instances of the abuse, Wehmeyer provided alcohol or marijuana to the boys.

Wehmeyer pleaded guilty in 2013 of sexually abusing the two younger brothers in 2010. He also pleaded guilty in August 2015 in a Wisconsin court of sexually assaulting the third brother on a camping trip. Pope Francis dismissed him from the clerical state in 2015, meaning he can no longer exercise priestly ministry or present himself as a priest. He is currently in prison.

The Ramsey County charges alleged that the archdiocese had information that should have prompted its leaders to remove Wehmeyer from ministry before Archbishop Harry Flynn appointed him administrator of Blessed Sacrament in 2006, and it did not follow its own protocols, despite known instances of Wehmeyer’s “risky behavior” and violations of safe environment standards.

Ten days after the charges were filed, Archbishop John C. Nienstedt, who had led the archdiocese since 2008, and Auxiliary Bishop Lee A. Piche resigned, citing the need to step down to allow healing to begin in the archdiocese as leaders of the archdiocese.

“When I arrived here about a year ago, criminal and civil charges against the archdiocese had just been announced,” Archbishop Hebda said. “A decision had to be made: Do we fight the charges in court — which would have taken years of time and considerable resources — or do we work with the Ramsey County Attorney’s Office to try to make amends to those harmed and achieve justice for all in the broadest possible way. We chose the latter.”

He added: “Cooperation was the right avenue to achieve a just solution.”

In December, the archdiocese reached a settlement agreement with the Ramsey County Attorney’s Office on the civil petition, in which it agreed to continue child protection protocols it had already implemented as well as additional measures, and to Ramsey County’s oversight of its safe environment procedures for three years.

On July 20, the archdiocese presented a six-month progress report on its compliance with the agreement to Ramsey County District Court Judge Teresa Warner. Attorneys for the archdiocese and the Ramsey County Attorney’s Office described their strong, ongoing collaboration and affirmed the report satisfied the County Attorney’s requirements and demonstrated a significant effort to protect children.

Warner accepted the report and commended the work of the archdiocese and attorney’s office.

“What happened to kids in this case cannot be undone, but steps to work together … (are) significant,” she said. “You rolled up your sleeves, and you looked at what you could do to protect kids going forward.”

Assistant Ramsey County Attorney Thomas Ring noted that in the settlement, the archdiocese had agreed to take on “something more comprehensive than a court may have been able to offer.”

At a later news conference, Choi explained that a court likely wouldn’t have been able to mandate county oversight of the archdiocese’s protocol implementation due to laws separating church and state.

NEXT: Catholics seek to change narrative of violence for denizens of Holy Land