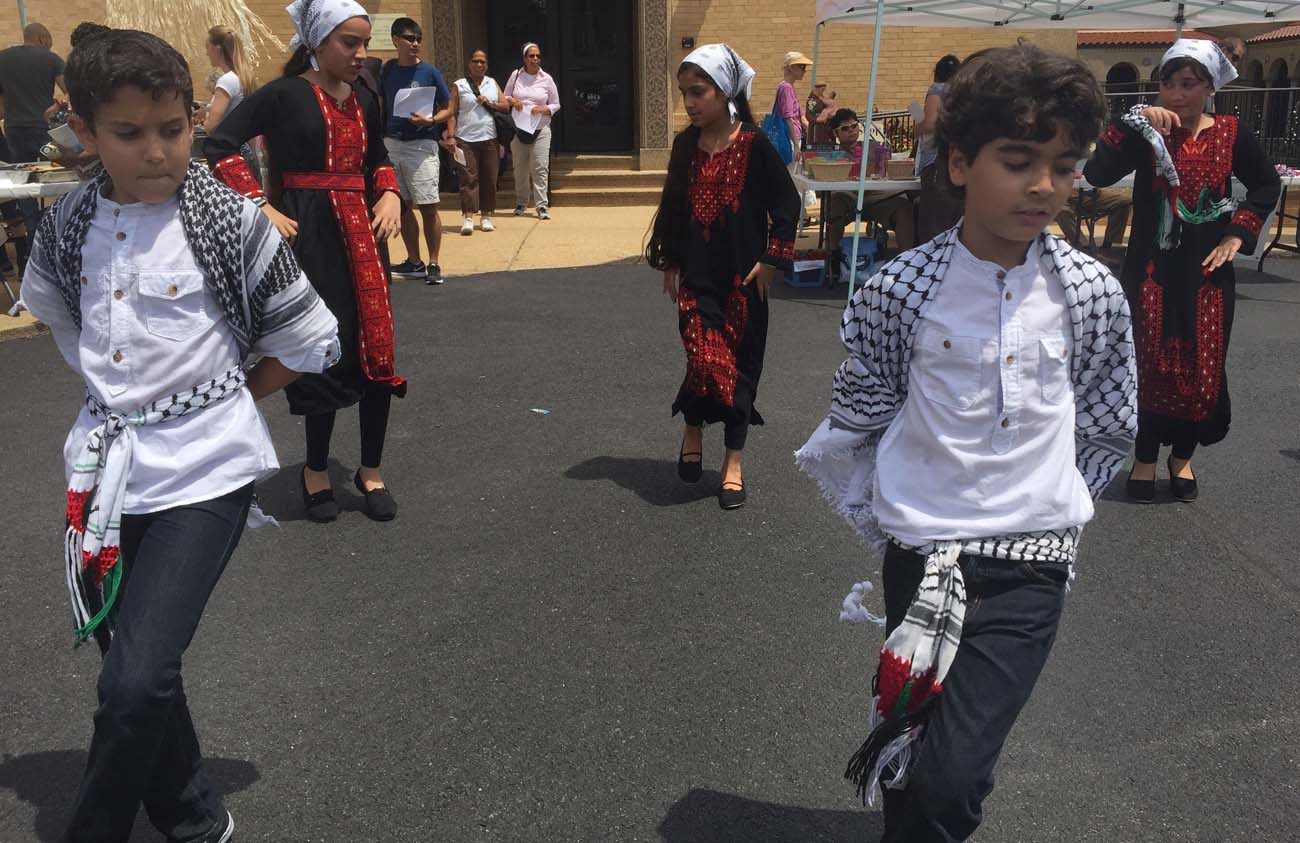 Children from the Kufiyah Dabke Troupe dance at the Franciscan Monastery of the Holy Land in Washington July 16. The monastery was the setting of the Holy Land Festival, which seeks to highlight the plight, but also the beauty, of the culture of Palestinians in the Holy Land. (CNS photo/Rhina Guidos)

WASHINGTON (CNS) — The event was designed to show the daily life and culture of those who live in the Holy Land, an area as beautiful and historic as it is conflict-ridden. And it did just that when one of the Palestinian Christians who was supposed to be present for a live video chat showed up late because he was detained at an Israeli checkpoint.

“If they’re suspicious, they will make you wait,” explained Nicola Kawas, who works with Christian senior citizens in Birzeit, north of Jerusalem.

He was one of three Palestinian Christians who spoke from the Holy Land with a Washington audience via Skype July 16. The panel was part of Washington’s Holy Land Festival, which seeks to celebrate the culture of those who live in the Holy Land by showcasing the food, music and dances of the area. The festival was trying to raise awareness this summer about the plight of those who live there, particularly the Palestinians, Christians and Muslims, who have long called the region their home.

Palestinians who live there live in a “special situation,” said panelist Margaret Tarek Al-Sous. Palestinians are often searched and/or questioned at Israeli checkpoints before they’re allowed to move through Bethlehem and other cities that they and generations of their families have long inhabited. Depending on where they live, they may not be allowed to have a passport but can travel with great difficulty using a travel document.

“We want people to know that we’re trying to live a normal life in an abnormal situation. We’re not terrorists,” said Nicola Handal, a 20-year-old Palestinian who is Catholic and is visiting Washington this summer with Bethlehem University, the first Catholic university in the Holy Land, where he studies.

Bethlehem University, founded in 1973 by the Vatican and the De La Salle Christian Brothers, also is seeking better understanding of Palestinians and interreligious dialogue, and hosted a July 19 event in Washington so the students could talk about their experiences. Handal and three other Bethlehem University students are spending time in nation’s capital in July as part of a student ambassador and internship program.

Living in a place like Gaza or where other Palestinians live in the Holy Land is like “living in a big prison,” Handal said. “We’re restricted.”

To visit relatives, to visit holy places or even to move around within a city, Palestinians need to pass checkpoints and sometimes have to apply for permission. None of that guarantees that they’ll be able to move through the land where generations of their family have lived for centuries. Even a social media post by a Palestinian can prove troublesome and land you in jail, said Dina Awwad, another Bethlehem University student traveling with Handal.

It’s difficult to fight popular depictions of Palestinians portrayed by others, labeling them terrorists or violent, Handal said.

Events like the Holy Land Festival in Washington are trying to change those views, at least abroad, not just by getting people talking, which they see as essential to that mission, but also by getting others to witness the beauty of the culture.

Part of the festival at Washington’s Franciscan Monastery of the Holy Land included a Washington-area children’s dance troupe that performed an Arab folk line dance. The festival also featured Arabic script, written from left to right, as well as culinary treats that can be found in the streets of Jordan and Bethlehem, and showcased the contributions of the Catholic Church — such as spiritual care in parishes, education in grammar schools and universities and health care in hospitals and clinics in the Holy Land.

For Father Jim Gardiner, a Franciscan Friar of the Atonement, and member of the Holy Land Committee of the Archdiocese of Washington, which organized the festival, the gathering offered “an alternative narrative to popular perceptions of violence,” while celebrating the Palestinian culture and spirituality, he said. “Muslim participation is integral to the festival’s Catholic Christian identity.”

But moving beyond differences in the Holy Land will take more than just understanding the ins and outs of culture. On July 12, Archbishop Bernardito Auza, apostolic nuncio and permanent observer of the Holy See to the United Nations, spoke to the U.N. Security Council, clamoring for a solution to the problem in the region.

“The time is long overdue to put an end to the Israeli-Palestinian conflict, which has become increasingly unacceptable as it becomes increasingly intractable,” he said.

“For the Holy See,” he said, “the two-state solution holds the best promise.”

That means Palestinians would have an independent State of Palestine next to the State of Israel.

“Durable peace will remain a distant dream and security will remain an illusion if Israel and Palestine do not agree to exist side-by-side reconciled and sovereign within mutually agreed and internationally recognized borders,” the archbishop said. “Let the two states be created now, for the sake of the Israelis and Palestinians who, in the depths of their hearts, desire nothing greater than peace and security.”

For some like Christeen Darwish, a 20-year-old Catholic from Jericho, also in Washington with Bethlehem University this summer, hope is difficult to keep alive but it’s all there is, she said. She wants nothing but peace for her people, for other Christians, for her Muslim neighbors and friends, and for all who live in the Holy Land. But the only ones who can change the situation for those who live in the region have not taken action.

“What’s killing us Palestinians,” she said, “is silence. The silence of the governments.”

Irish Father Michael McDonagh, international adviser to the Latin Patriarchate of Jerusalem, who also spoke on the panel at the Franciscan Monastery, said he finds it difficult these days to place hope on what politicians will and won’t do.

“For me, God is in absolute charge, although I don’t understand his ways,” he said, adding that it’s difficult to be a witness to the daily humiliations faced by Palestinians.

He spoke of a recent example of a Palestinian woman traveling with her son who has cerebral palsy and was taking him for therapy in some baths. She was stopped at an Israeli checkpoint, was made to wait two hours in the heat and was asked for a birth certificate. It was hot and she explained that it would be difficult to take her son back in the heat to look for it. Ultimately, she left her son at the checkpoint, went home to pick up the birth certificate, showed it to security, but was still denied permission to cross.

“My hope,” concluded Father McDonagh “is in God opening eyes of understanding. For me, that’s where my hope lies. … It’s not about the land, it’s about the kingdom of God and kingdom of God is for all people.”

NEXT: Mercy ‘sets our hearts free,’ bishop says at Mass for Native Americans